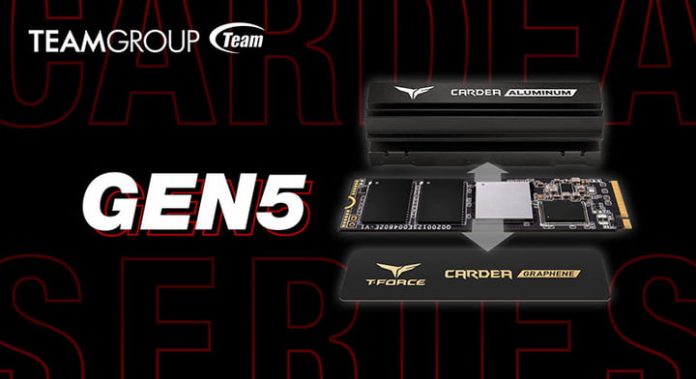 TeamGroup has just announced the release of a new PCIe Gen 5 SSD called the T-Force Cardea. Aimed at gamers, the SSD offers unprecedented read and write speeds. as well as huge storage capacity.

The company promises read speeds of over 13,000MB/s and write speeds above 12,000MB/s, which would easily put this SSD miles ahead of many other models available on the market.

TeamGroup’s new SSD is being launched as part of its gaming subbrand T-Force and belongs to the Cardea series of SSDs. With the aforementioned ultra-high read/write speeds and a maximum capacity of 4TB, it’s likely going to be a premium product for the most demanding users.

T-Force Cardea is a PCIe 5.0 NVMe 2.0 drive, and in its creation the manufacturer emphasized the durability and longevity of the drive. Being a Gen 5.0 PCIe SSD, the drive ushers in the next generation of PCIe and makes the most of its speeds.

According to the manufacturer, T-Force Cardea was made to support the future needs of gamers. Switching to the next generation of PCIe enables the drive to offer the speeds required for seamless streaming and playing games in augmented reality or even virtual reality.

In its press release, which was shared by VideoCardz, the company predicts that the new SSD will be ranked firmly among the best SSDs, going as far as to claim that it will be the “highest-performance PCIe Gen 5 flagship SSD” upon launch. It’s true that Cardea has an undoubtedly impressive 13,000MB/s read speed and 12,000MB/s write speed, but it may not be the number one SSD on the market.

We’ve seen rumors and teasers of SSDs that may match, or even surpass, the read speeds of the T-Force Cardea. Samsung has recently teased a new PCIe 5.0 SSD with read speeds as fast as those of TeamGroup’s SSD: Up to 13,000MB/s. However, the upcoming drive will have much slower write speeds of 6,600MB/s.

Kioxia has also shown off a prototype of an SSD with 14,000MB/s in read speeds. As reported by PCMag, the drives will feature 32Gbps per data lane. Even though Kioxia may one day have T-Force beat in terms of read speeds, Cardea emerges victorious where write speeds are concerned, because Kioxia’s SSDs will max out at 7,000MB/s. Adata has also recently talked about its upcoming PCIe 5.0 SSDs with read and write speeds exceeding 14,000MB/s and 12GB/s respectively.

Each new generation of PCIe offers double the speeds of the previous generation, and this generation is still fairly new. Up until the release of Intel Alder Lake in late 2021, the technology was unused. Now, Alder Lake CPUs support PCIe Gen 5.0, and AMD will soon launch its AM5 socket with support for both PCIe 5.0 and DDR5 memory. As such, we may start seeing these ultrafast SSDs more often sometime soon.