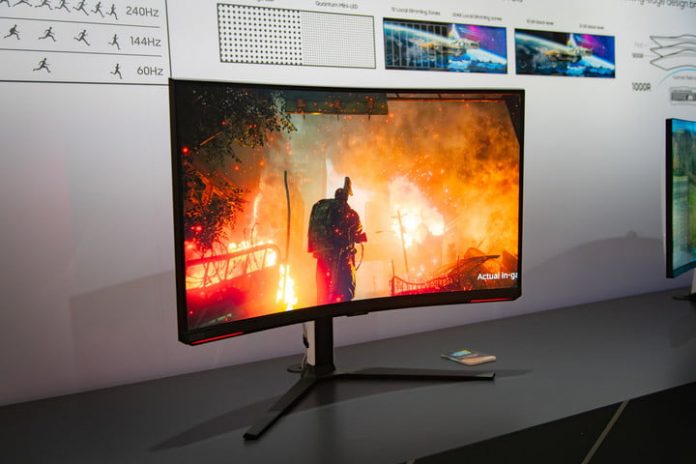 Multiple companies came out with high refresh rate 4K monitors during CES 2022. Acer, for example, debuted the world’s first 4K monitor with a 165Hz refresh rate. But then Samsung showed up, and the company clearly wasn’t content to end CES 2022 quietly.

Amid announcements of  “world’s first” 4K gaming tech, Samsung blew away everything with a 4K monitor that can run at 240Hz: The Odyssey Neo G8. It’s not practical at the start of 2022, but it’s the new benchmark that high-end gaming displays will need to measure up to.

The Odyssey Neo G8 is the world’s first 4K monitor that runs at 240Hz. Higher refresh rates show diminishing returns, but the Odyssey Neo G8 still looked as smooth as can be on the show floor. If 144Hz is the sweet spot for gaming monitors, 240Hz is even better.

I hear you, though: You can’t even use a 240Hz refresh rate at 4K with most games. That’s true. Even the behemoth RTX 3090 can’t manage 240 frames per second (fps) in most games, but there are still esports titles like Counter-Stike: Global Offensive and Rainbow Six Siege where 4K at 240Hz is a possibility.

If 4K at 240Hz is ridiculous, than so is 4K at 144Hz. There are precious few games that can take advantage of that high refresh rate now, but with new graphics cards and features like Nvidia’s Deep Learning Super Sampling (DLSS), 4K gaming at 240Hz isn’t too far off.

It’s future-proof, too. You can’t really future-proof a gaming PC, but you can a monitor. Display tech doesn’t change nearly as fast, and Samsung is on the cutting edge. Even a few years down the line, I can’t imagine there will be many displays that will top the Odyssey Neo G8.

The Odyssey Neo G8 tops out at a peak brightness of 2,000 nits in HDR mode. Monitors with that kind of brightness don’t really exist, outside of portable field monitors for video production and Samsung’s own Odyssey Neo G9.

The Neo G8 shares other similarities with its super-ultrawide sibling. It uses a QLED panel and has a static contrast ratio of 1,000,000:1. Even under the blistering show lights at CES, the colors were vibrant and the contrast was deep. This is easily one of the best-looking gaming monitors I’ve seen.

It’s like Samsung took the Odyssey Neo G9 and trimmed the sides off. You’re getting one of the best gaming monitors on the market, just without the extra bulk. Even at 144Hz, the Odyssey Neo G8 would be a killer.

I couldn’t fully test noise and heat, but I stuck my hand around the back to see what the monitor was putting out. And I’m happy to report that there wasn’t any heat. High-end, cutting edge monitors can fall apart with noise and thermals, but the Odyssey Neo G8 doesn’t seem to fit that mold.

No matter how expensive the Odyssey Neo G8 will be — and make no mistake, it will be very expensive — it’s a new benchmark for gaming monitors. Simply put, 240Hz is far above anything we’ve seen from other 4K displays, and coupled with some of the best HDR on the market, there’s no contest.

It’s still a forward-looking display, though. There are some games that can reach 4K at 240Hz, but most can’t. The benefits of such a high refresh rate on a 4K monitor won’t be clear for at least a few years, and likely many more.

But, when that time comes, the Odyssey Neo G8 will still be able to hold its own.