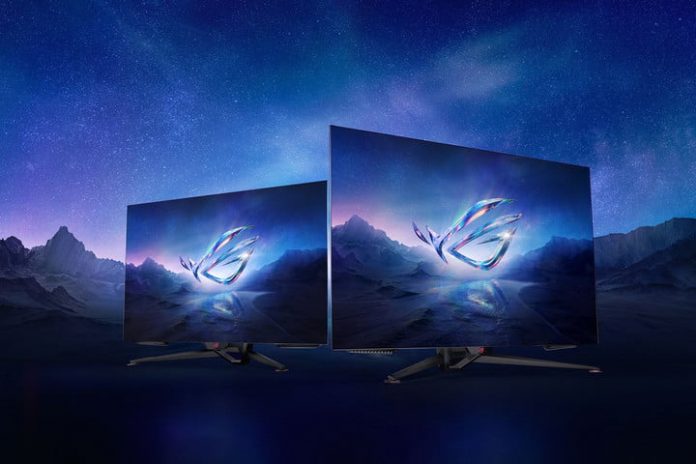 Asus announced two new OLED gaming monitors at CES 2022, including the world’s first 42-inch 4K OLED display. The monitors may target gaming with their high resolutions and refresh rates, but Asus says they come with excellent color and contrast thanks to the OLED panel, as well.

There are two versions available, a 48-inch model (PG48UQ) and a 42-inch one (PG42UQ). We’ve seen 48-inch OLED displays before, including the Gigabyte Aorus FO48U and LG C1, but never a 42-inch display. At 42 inches, it’s still a little big for some setups, but it’s a lot closer than the 48-inch displays that have made the rounds over the past year.

Both are considered premium gaming displays, and they come with the specs to match. They come with 4K resolution at 120Hz, as well as a response time as low as 0.1ms. The displays don’t currently have VESA DisplayHDR certification, though they support HDR10 and top out at a contrast ratio of 1,000,000:1.

More impressive is the color accuracy. The panels cover 98% of the DCI-P3 color space, and Asus says each panel is factory calibrated to achieve Delta-E values of less than 2. These may be gaming displays, but if the panels are as color accurate as Asus suggests, they could be great for photo and video editing, too.

In addition to a DisplayPort 1.4 connection, the high resolutions and refresh rates are enabled by a pair of HDMI 2.1 ports. And no, these aren’t the “fake” HDMI 2.1 ports we’ve seen as of late. They support the full 48Gbps bandwidth of the standard, along with variable refresh rate and auto low-latency mode for console gamers.

The 42-inch model, in particular, seems like the perfect gaming display for PCs and consoles. As usual, the linchpin is price. Asus hasn’t revealed pricing or availability details about these displays yet, which will make all the difference. We don’t have firm details on the release, though we expect the monitors in the second half of 2022.

Along with the new displays, Asus revealed a range of peripherals joining its ROG lineup in 2022. These include a key Strix Flare keyboard that comes with hot-swappable switches and a 320-LED animated matrix.