HomeNewsTaco Bell’s Xbox Game Pass-style pass will put a taco in your...
News 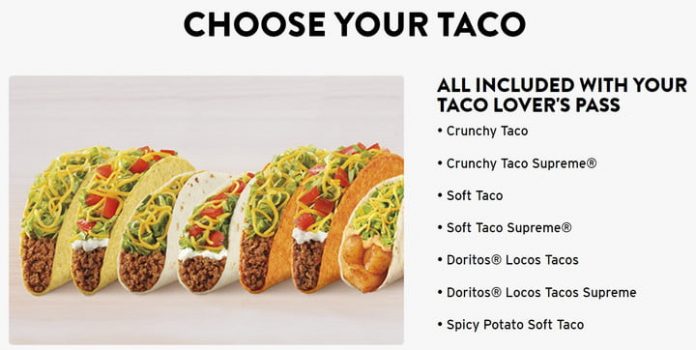 Taco Bell now has a subscription that lets you pay a fixed monthly price to munch on its offerings for a month. Now, before you start raging at the idea on Twitter and furiously type a lengthy Reddit post, hear me out. You pay just $10 and get to enjoy one taco a day, for 30 days in a row. The subscription service also has a delightfully apt name — Taco Lover’s Pass.

Here’s the basic fast-food calculus model to explain the whole idea. A Crunchy Taco Supreme costs $2.19. If you pay a handsome $10 for the Taco Lover’s Pass, you get to eat about $65 worth of tacos. Put it simply, you’ll save about $55 a month, while also pumping 190 calories into your body each day. “What a supreme deal,” says the press release, though some on Twitter had a different opinion.

The menu is somewhat limited, though. You can only choose from among the brand’s seven “most iconic” tacos, all of which are vividly pictured and listed in the image below. As for the name, well, it looks like Taco Bell’s partnership with Microsoft was an inspiration. Microsoft sells Xbox Game Pass, Taco Bill is serving you Taco Lover’s Pass.

The Taco Lover’s Pass can be purchased from Taco Bell’s mobile app. And before you start scheming, no, it can not be combined with other offers. The subscription is nontransferable, nonrefundable, and doesn’t have any cash value either. And it is an in-restaurant-only deal.

Simply put, you need to visit a nearby Taco Bell outlet and proudly brandish your phone to show the staff that you’re a Taco Lover’s Pass subscriber to get to enjoy a free taco in peace. How much gas money you burn while driving to your local Taco Bell is not the restaurant chain’s concern, obviously.

And then comes the all-too-important question of the human appetite. If your hunger can be calmed by a single taco, this is a terrific deal. But if eating a regular taco only fuels the fire in your belly for, say, a chalupa, you’ll have to pay extra. In that scenario, the Taco Lover’s Pass is reduced to just another subscription, and Taco Bell gets richer at your expense.

Not exactly a eureka moment

Taco Bell’s “Netflix for Tacos” service is not a fresh idea. Pret offers multiple tiers of its tea and coffee subscription service. Panera will also let you sip on unlimited iced/hot coffee and tea for $9 per month, and there’s a similar product available at BJ’s Beer Club.

Facebook
Twitter
Pinterest
WhatsApp
Previous articleIntel and AMD are mounting an attack against Nvidia. But will it work?
Next articleTaco Bell’s Xbox Game Pass-style pass will put a taco in your belly daily for $10 a month
- Advertisment -