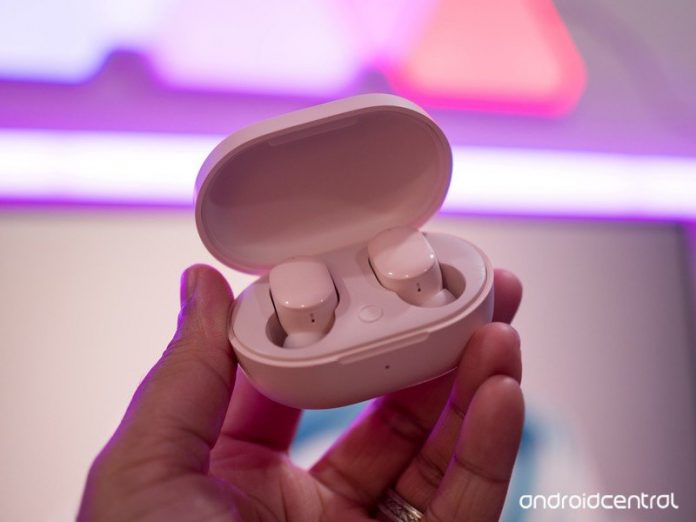 Redmi’s latest earbuds have dual drivers and the latest connectivity, but the sound quality is ultimately lacking. 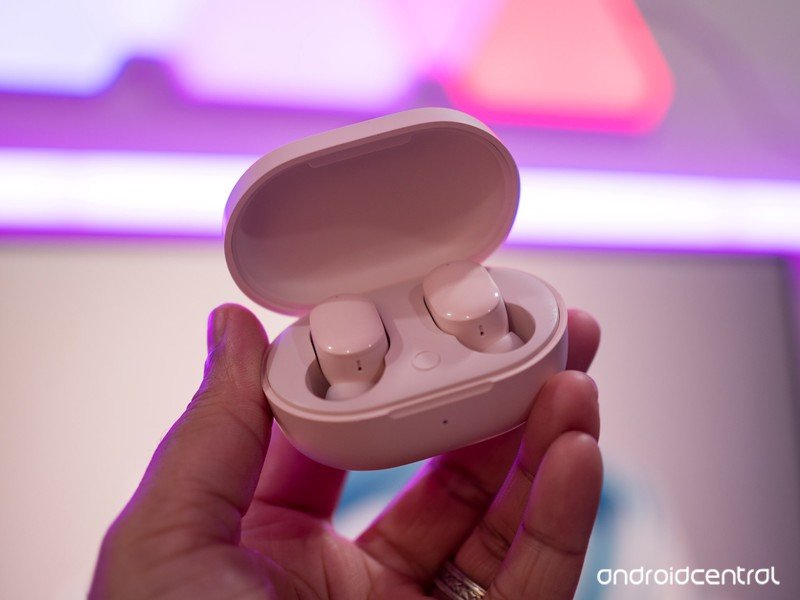 Xiaomi is now the world’s second-largest manufacturer of wireless earbuds, with the likes of the $72 Buds 3 Pro holding their own among the best wireless earbuds in the market today. Xiaomi offers products under its own label as well as the Redmi brand, with the latter focused more on the value category.

I liked the entry-level Redmi Earbuds S that were released back in 2020, and Xiaomi has rolled out several products in the budget wireless audio segment in the last 18 months. The latest is the Earbuds 3 Pro, and Xiaomi is offering a lot here: these earbuds feature a dual-driver design, include Qualcomm’s high-end AptX codec, and last over seven hours on a full charge.

But as we shall see below, the feature-set is negated by the fact that the Earbuds 3 Pro are lacking in the one area that matters the most: audio quality. 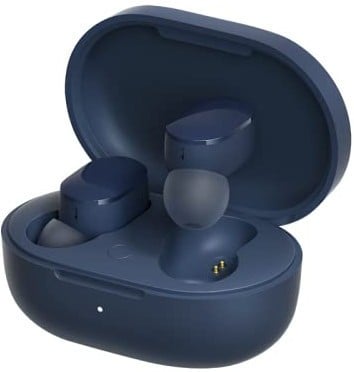 Bottom line: At the outset, the Redmi Earbuds 3 Pro have a lot going for them. They have a dual-driver design, long-lasting battery, IPX4 sweat resistance, and Qualcomm’s AptX audio codec. However, the sound quality isn’t as good as the hardware would suggest, there’s no customization, and the fit is far from ideal. 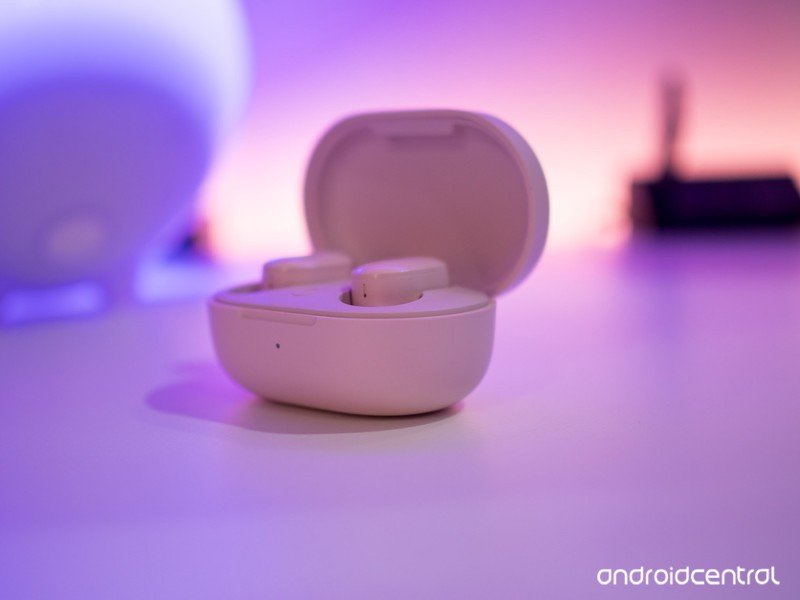 Xiaomi hasn’t rolled out the Redmi Earbuds 3 Pro in most global markets, instead focusing on the similarly-named Redmi Buds 3 Pro. These earbuds have wireless charging, a better overall fit, and you can easily customize the sound. The Redmi Buds 3 Pro are sold in most regions where Xiaomi has an official presence — including the U.S. — for $72. 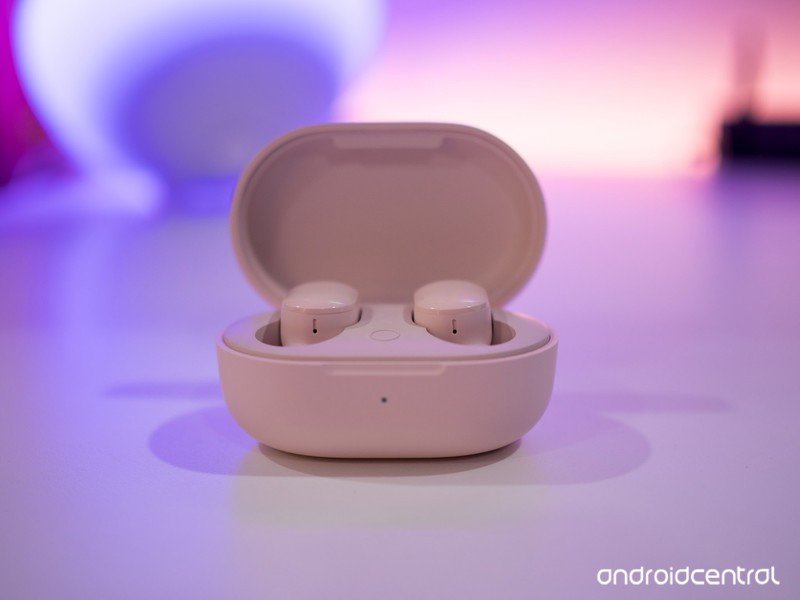 Xiaomi hasn’t changed too much with the design of the Redmi Earbuds 3 Pro; they look largely identical to earlier offerings in this series. The bulbous design houses the drivers and the batteries, with angled eartips nestling into your ear canal.

These earbuds have a familiar design, and the color options make them just that little bit more interesting.

What makes the design stand out is the new color options. The Earbuds 3 Pro are available in pink and blue variants, and they look rather striking. The fit and finish are among the best in this category, and that extends to the case as well: it has a good build quality and holds the earbuds securely via magnets to ensure they don’t rattle when they’re in the case.

The case has a pairing button and a charging indicator at the front, and it charges via USB-C. They’re very straightforward to set up, and while there’s no NFC here, if you’re using a Xiaomi phone, they’re detected automatically. I used the earbuds with the Galaxy Z Fold 3, and they showed up for Bluetooth pairing immediately after I took them out. 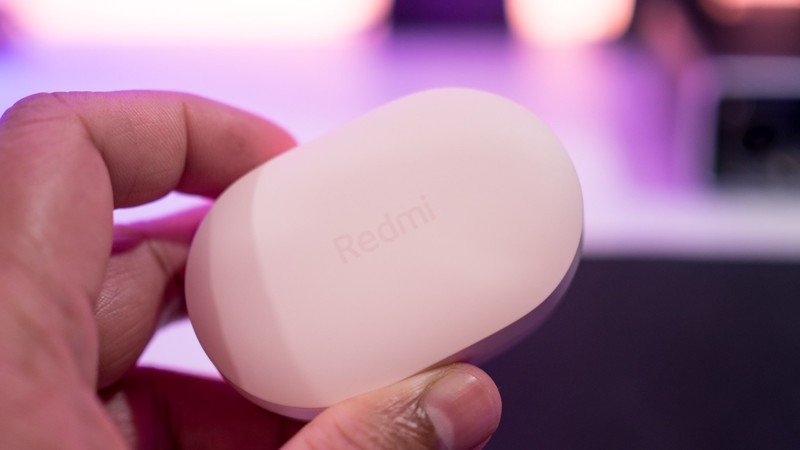 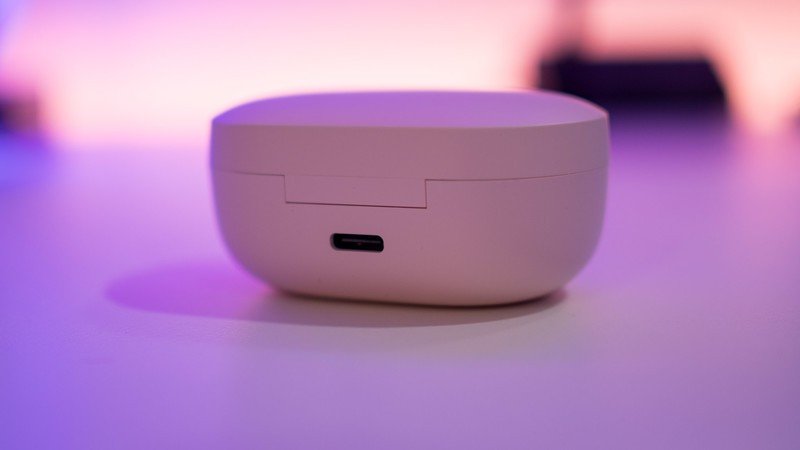 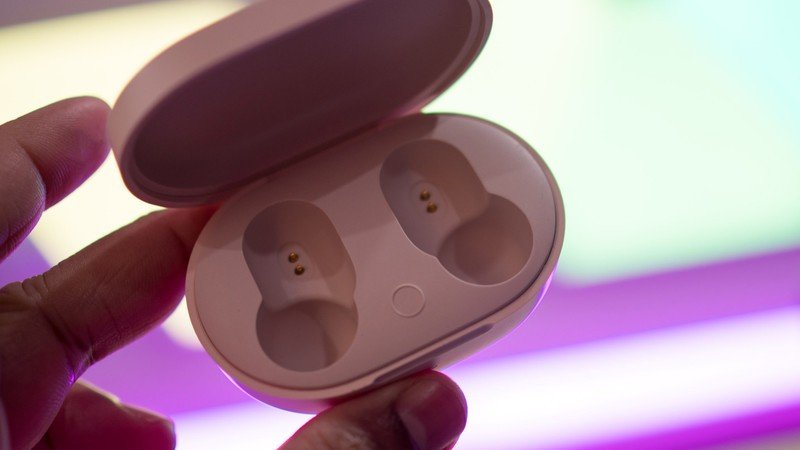 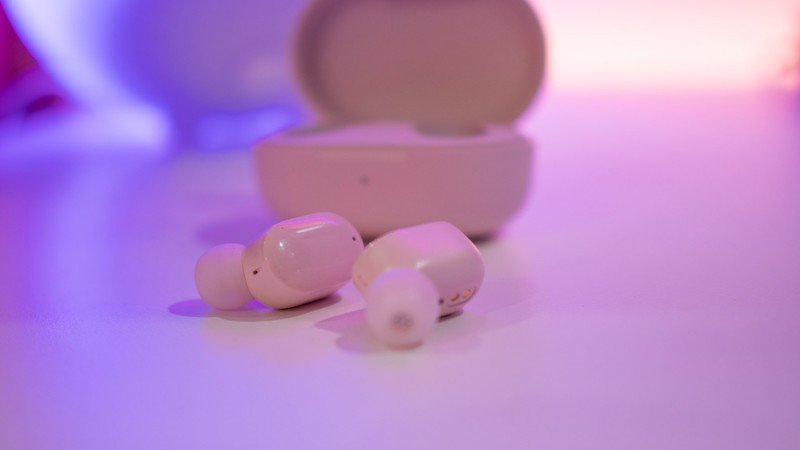 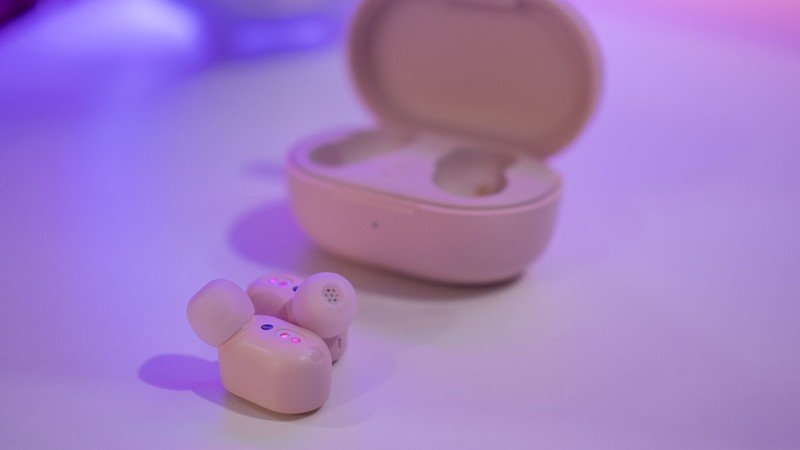 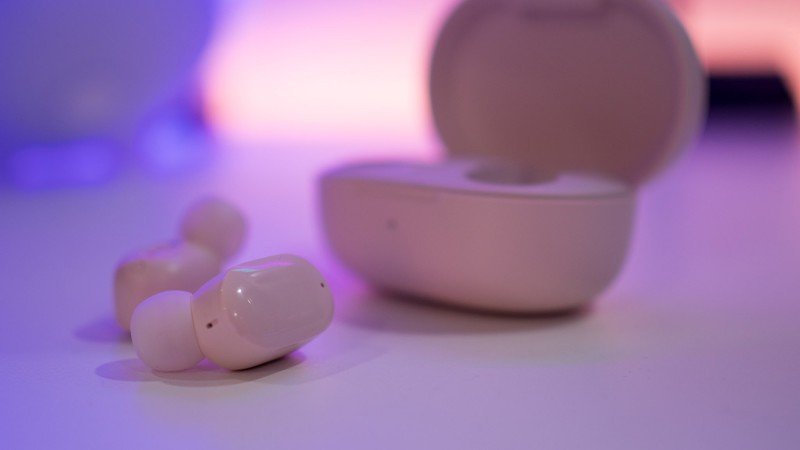 Xiaomi hasn’t been stingy in terms of features; the Earbuds 3 Pro have Qualcomm’s AptX Adaptive audio codec to deliver low-latency audio that goes as low as 86ms, and that does make a difference while gaming. They also have rock-solid connectivity over Bluetooth 5.2, and I didn’t see any issues on this front while using the earbuds around the house.

You also get IPX4 sweat resistance, making them a decent option for workouts. And with in-ear detection via IR sensors located on each earbud, whatever you’re currently playing automatically pauses when you take the buds out of your ears — and resumes when you put the buds back in.

The biggest draw with the Earbuds 3 Pro is the battery life. Each earbud has a 43mAh battery, and they last over seven hours on a full charge. That’s with the volume set to 75%, and you can easily eke out another hour’s worth of use by decreasing the volume. The case is good for three additional charges, so you get up to 30 hours of music playback before you’ll have to charge the case. 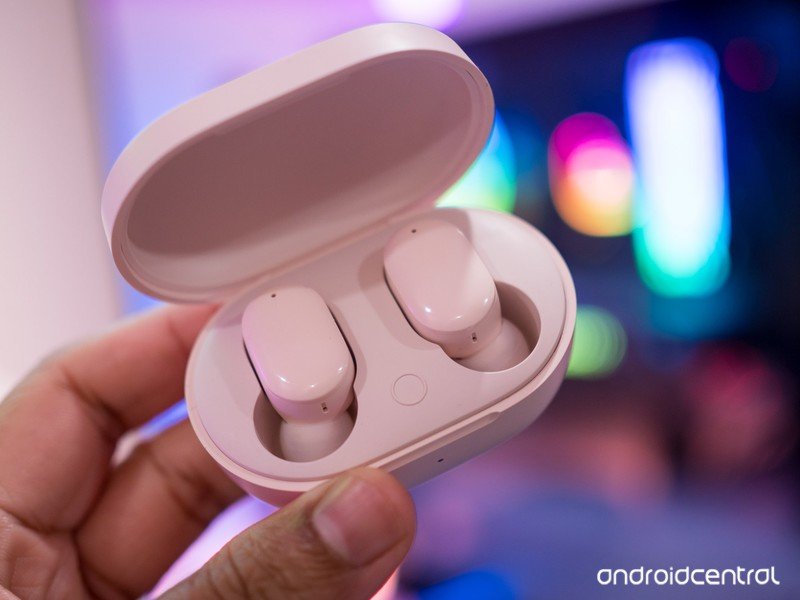 As much as the Earbuds 3 Pro get right in terms of features, Xiaomi hasn’t nailed the sound quality. The dual-driver design has a lot of potential, but the audio is heavily focused on low-end frequencies that ultimately takes away from the mids. The earbuds have a balanced armature driver that’s aimed to deliver clear highs, but it ends up being too aggressive.

Xiaomi hasn’t nailed tuning the Earbuds 3 Pro, and as a result they fall short in the one area that matters most.

Therefore, the Earbuds 3 Pro are nowhere near as good in this area as other earbuds, a fact that was immediately evident once I started playing heavy metal. The aggressive low-end masks the earbuds’ deficiencies when listening to bass-heavy tunes, but I tried streaming Gojira’s From Mars to Sirius, and the earbuds fell flat. The vocals were too harsh, there wasn’t any definition in the mid-range, and the treble was too pronounced.

Now, Xiaomi could have found a way to fix the balance with a firmware update — but seeing as how the earbuds lack a companion app, there isn’t a way to actually do so. You get gesture controls on each earbud, but they’re not customizable, and in my usage, I found them to be finicky — more often than not, gestures would not register.

Finally, there’s the fit. I couldn’t quite get a comfortable fit and was constantly fiddling with the earbuds, so that’s something to consider as well. The mic quality isn’t the best either; I made two calls with the earbuds, and I came across as muffled. 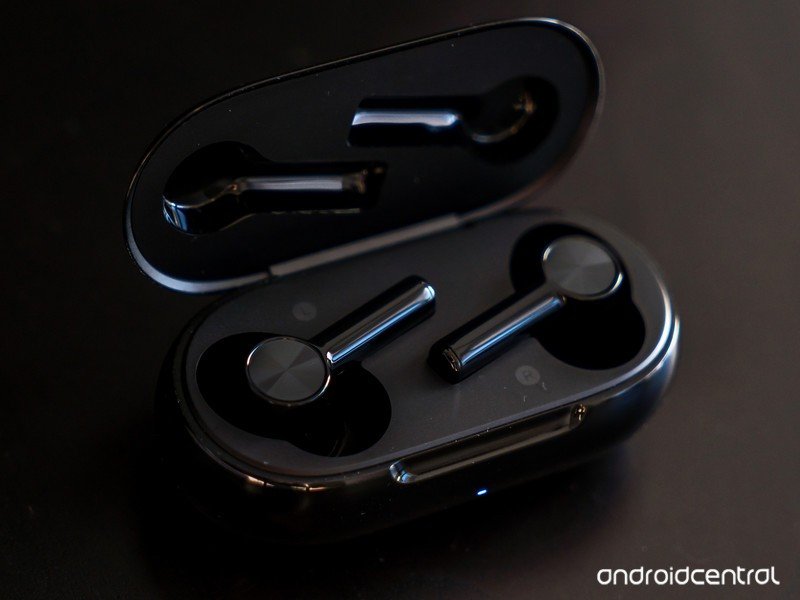 The budget wireless earbuds category has dozens of choices in India, and a few manage to stand out. The ₹2,800 ($38) Enco W11 sound great for what they cost, and they don’t miss out on the extras: you get IP55 dust and water resistance, environmental noise reduction, and five-hour battery life between charges.

OnePlus’s Buds Z also hold their own in the budget segment. I’m not a fan of earbuds that have a long stalk, but the Buds Z sound good, have a lot of features, rock-solid connectivity, and are a good overall value.

Redmi Earbuds 3 Pro: Should you buy it? Xiaomi makes a lot of good wireless earbuds, and the Redmi Earbuds 3 Pro are an outlier in that they fail to deliver on the basics. Sure, you get a lot of features, but they ultimately fall short when it comes to sound quality, and that’s a pretty big miss — particularly considering Xiaomi’s heritage in this category.

If you’re interested in budget wireless earbuds for music, there are plenty of alternatives available. If you like the rest of the features and want to use the Earbuds 3 Pro for TV shows and gaming, you will find a few things to like: the battery life is great, the low-latency mode works well, and the in-ear detection is a nice addition.

Bottom line: Redmi’s budget Earbuds 3 Pro aren’t short on features, but the audio tuning leaves a lot to be desired, and that makes these earbuds a tough sell. There are other options that sound better and give you a better value for your money.