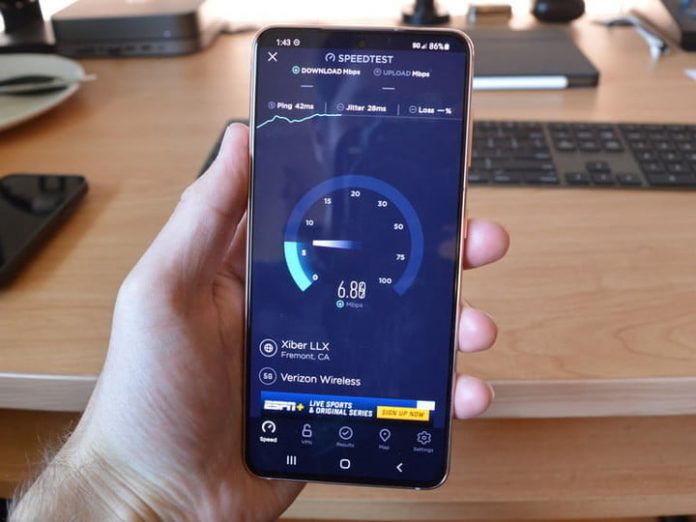 New data from Ookla gives us a good look at exactly why Verizon and AT&T were in such a hurry to roll out their new C-band 5G spectrum.

It hasn’t even been two weeks since both carriers forged ahead in rolling out the new midband 5G frequencies, and Ookla already sees noticeable increases in 5G speeds across the country. These speed jumps have the potential to unseat T-Mobile as the front-runner in the 5G race.

Following a frenzied controversy with the Federal Aviation Administration (FAA) and the broader aviation industry, Verizon and AT&T began rolling out the new C-band spectrum on January 19, promising dramatic performance improvements for their 5G customers.

Verizon made the boldest claims of all, stating that it would be using the new spectrum as part of its 5G Ultra Wideband service, which would expand to cover more than 100 million people throughout more than 1,700 cities. Verizon’s 5G Ultra Wideband service originally used only much higher-frequency (and shorter-range) mmWave technology, which allowed the carrier to offer incredibly fast speeds, but only in a few major urban centers.

Meanwhile, AT&T has taken a more conservative approach, rolling out its new C-band spectrum in only seven cities: Dallas/Fort Worth, Houston, and Austin in Texas; Jacksonville, Orlando, and Miami in Florida; and Chicago and Detroit.

Why C-band is important

The rollout of the new C-band spectrum promises to fix what has become quite a mess in the 5G landscape in the U.S. by allowing the carriers to deliver true 5G speeds to their customers.

Previously, both AT&T and Verizon were limited to lower-frequency spectrum that shared space with their 4G/LTE networks using a technology known as Distributed Spread Spectrum (DSS). The result was that neither carrier was able to deliver nationwide 5G speeds that were noticeably better than 4G. In fact, some reports suggested that customers were better off disabling 5G on their smartphones entirely and just staying on their carrier’s 4G/LTE service.

The one exception to this was T-Mobile, which already owned a healthy chunk of midband spectrum thanks to its 2020 merger with Sprint. This allowed the carrier to get a head start on its rivals, rolling out faster spectrum to more than 200 million customers as part of its Ultra Capacity 5G service.

The results so far

Thanks to its early lead, T-Mobile has consistently ranked number one in 5G performance, coverage, and reliability, but that could soon change.

A new report from Ookla shows that T-Mobile’s rivals are already closing the gap, only days after turning the switch on the new C-band spectrum.

Most significantly, Verizon’s median nationwide performance jumped by nearly 52 percent in the week of January 19, when its new C-band service went live, breaking the 100Mbps barrier for the first time. Many Verizon customers also saw the “5G UW” icon show up on their smartphones for the first time, which likely also drove a spike in testing by folks on Verizon.

While AT&T didn’t see any meaningful increase nationwide, Ookla reported noticeable increases in those specific cities where the carrier had deployed its C-band service. For example, AT&T customers experienced a 12 percent increase in median download speeds in Austin, Texas.

Early last year, the three U.S. carriers spent billions to pick up sizeable chunks of this new C-band spectrum at auction, with Verizon dropping a record-breaking $45.4 billion for its share, followed by AT&T at $23.4 billion and T-Mobile at $9.3 billion.

Even the initial auction was controversial, with the FAA warning that the new C-band frequencies were perilously close to those used by important aircraft instruments such as radar altimeters. Nonetheless, the Federal Communications Commission (FCC) proceeded with the auction.

The carriers planned to begin rolling out the new C-band spectrum on December 5, 2021, but twice agreed to push back that schedule, first to January 5, 2022, and then finally to January 19. However, the latter delay only came after some intense discussions, the direct involvement of White House officials, and an implied promise by President Joe Biden that there would be no further delays.

Nonetheless, it appears that the billions of dollars and months of time invested are already paying off, particularly for Verizon and its customers. Ookla notes that if Verizon continues its aggressive C-band rollout, it could give T-Mobile a run for its money by the time Ookla publishes its next Speedtest Global Index Market Analysis.

However, we also shouldn’t count AT&T out just yet. Despite its slower start, the carrier plans to use its C-band alongside a chunk of lower frequency 3.45–3.55GHz spectrum later this year. These frequencies will also be far less controversial for deployment around airports, since they are well clear of the 4GHz+ spectrum that could adversely impact aviation equipment.