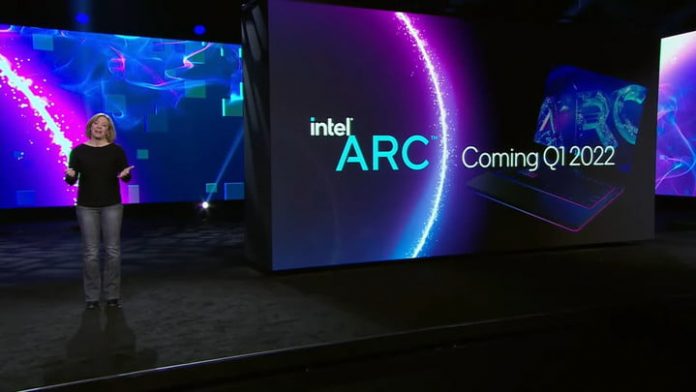 Intel’s first line of discrete gaming graphics cards, dubbed Intel Arc Alchemist, was supposed to be just weeks away — but it now seems that the GPUs may be delayed further.

Intel has removed all mentions of a first-quarter release from its website, leaving only the promise that the cards will be released sometime in 2022.

While there has been no mention of an exact release date of Arc Alchemist graphics cards, Intel’s website previously mentioned the first quarter of this year. This would point to an imminent launch. However, after not saying much on the subject during its CES 2022 keynote, Intel has now removed references to the first quarter from all of its Arc websites. This was first spotted by Videocardz.

This could mean that the GPU launch is being quietly delayed. During CES 2022, Intel focused largely on its plans for processors, but didn’t elaborate on the Arc lineup all that much.

The message is all the more confusing since Intel did speak about a first-quarter release on more than one occasion, including the recent CES keynote. However, it could be that this only applies to the laptop versions of Intel Arc. There has been no definite statement as to when the desktop versions are due to arrive.

Rumors suggest that the desktop Arc cards might be launching in the second quarter of 2022. However, with these deliberate steps that Intel has taken to scrap any mention of the first quarter from its website, it’s not impossible that the entire lineup may be delayed. At the very least, things don’t sound good for the desktop line of cards, and it’s possible that even the mobility versions won’t start shipping within the initial time frame.

This isn’t the first time we’ve heard about possible delays in regard to Intel Arc Alchemist. A report leaked at the end of December 2021 pointed to a March 2022 release date, already pushing it forward from the initially expected January launch. It also seems that Intel may at first launch just two DG2 gaming graphics cards for desktop users, although it’s possible that Intel’s partners may release alternate versions of the GPUs as well.

Considering that the release date was stealthily removed, it seems unlikely for Intel to speak about this anytime soon. The company’s next big event is Vision on May 10, which might be the time when Intel will announce the definite release date of Arc Alchemist graphics cards.