HomeNewsI don’t care if the Asus ROG Flow Z13 is a laptop...
News 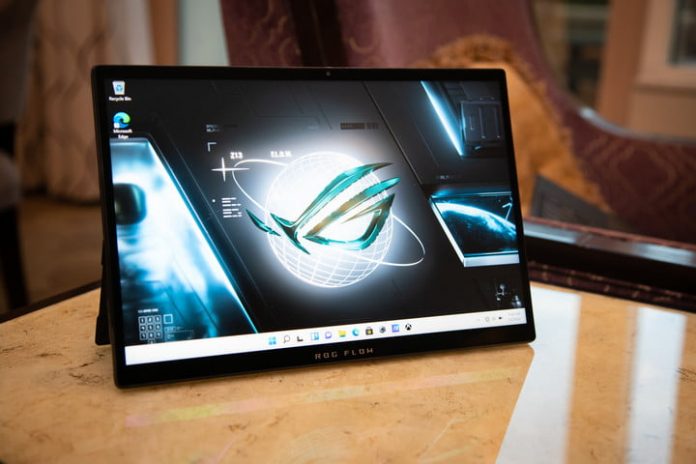 The ROG Flow Z13 is Asus’ new gaming laptop. I think. It’s actually a tablet, but it has gaming laptop components inside, and it can work as the centerpiece of a desktop setup.

I spent too much time at CES 2022 thinking about if the ROG Flow Z13 is a laptop or tablet than I care to share. But then I tried it, and I realized it doesn’t matter one way or the other. It’s just an excellent gaming device that I can’t wait to spend more time with.

The ROG Flow Z13 is a tablet, but it shares more in common with a laptop under the hood. It supports up to an Intel Core i9-12900H, the fastest mobile processor Intel currently offers, along with up to an RTX 3050 Ti and 32GB of LPDDR5 memory.

I wasn’t able to test it out in games — Intel is still waiting on demoing its 12th-gen mobile chips — but the Flow Z13 feels like a machine worthy of the hardware inside. It’s not too thick, but it feels like a tank, with metal bits all around the body and panels that seem like they can take a beating.

Thermals are my main concern, but Asus has some clever tech to keep the Flow Z13 cool. First, the machine is actively cooled with two fans, unlike a lot of tablets, and Asus used liquid metal for the CPU, which it says lowered temperatures by 10 degrees Celsius.

The kickstand sticks out for me. Asus opened up the underside of the kickstand to allow air to easily pass into the machine. The kickstand is made of metal, and it’s thick enough that the tablet won’t fall over. I’m not worried about it breaking, and that surprised me.

It’s just not adjustable. There’s one position for the kickstand, and it’s a little too tall. I would’ve liked to see maybe three or four positions to give the machine some flexibility, especially when it comes to using it as a secondary display. It’s not like the Surface Pro, for example, which can be adjusted to nearly any angle imaginable.

The screen is a showstopper, though. Asus is offering the Z13 with two screen options: 4K at 60Hz or Full HD at 120Hz, both of which are touchscreens. I’m partial to Full HD for this size. At 13 inches, the benefits of 4K are tough to notice. Regardless, you’re getting an OLED screen with colors that really seemed to pop into the room.

Breaking out of the box

The Flow Z13 is built to break out into a larger setup, but you don’t need to do that. The included keyboard is excellent. It’s below the best laptop keyboards, but I never missed a keystroke while using it.

It’s not as flimsy as the keyboards you typically find in 2-in-1s, but it still shares a lot with them. You wouldn’t want to write a paper or game on this keyboard, but it’s responsive enough for light use. My main issue is that the keyboard isn’t wireless. If you want to use it, it needs to be attached to the machine.

The keyboard is almost a secondary use case for the Flow Z13. It’s meant to be at the heart of a larger setup. You can hook up an Asus XG Mobile eGPU to tap into the power of up to an RTX 3080. You can also run out to another monitor and use the tablet as a secondary display.

This is my favorite use case for the Flow Z13. It’s an impressive machine given the size, but it’s still not a full gaming laptop. Breaking it with an external GPU or another monitor turns it from a solid 2-in-1 into something special.

The Asus ROG Flow Z13 is the endgame of 2-in-1s. It’s packed with superpowerful hardware, and it’s built like a tank — all without being any thicker than a normal tablet. After getting my hands on it, I can wait to use it again.

I imagine throwing the Flow Z13 into my backpack while I’m traveling and docking it at home for a powerful mobile workstation. The keyboard is a highlight, too. It’s not great, but it’s far above the keyboards you find on machines like the Lenovo Duet.

The lines between gaming laptop and tablet are blurring, and the Flow Z13 is the ultimate form of that. Gaming laptop? Tablet? It doesn’t matter. What matters is that it’s a monster of a machine, and I’m eagerly waiting the chance to pick one up.