HomeNewsApple’s mixed-reality headset is running out of time
News 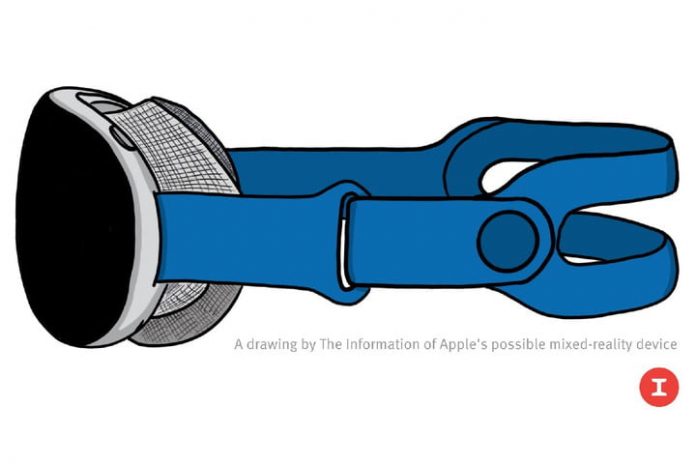 Recent weeks have seen a huge upsurge in news surrounding Apple’s heavily rumored mixed-reality headset, with leaks speculating on its release date, power capabilities, and even its name. Yet rather than clarify the device, these tidbits have just served to muddy the waters. Assessing the situation, it feels like Apple’s headset is just as ephemeral as it has always been.

The problem is that no one can seem to agree on what the device will actually bring to the table. We know people will wear it on their head, but that’s about the only detail that seems to be actually nailed down. And for a mixed-reality headset, it doesn’t exactly require Sherlock Holmes to work that one out.

A rendering of the potential Apple headset made by The Information.

From top to bottom, analysts can’t seem to agree on specs. For instance, the idea of the device featuring an 8K panel for each eye (at a resolution of approximately 7680 x 4320 pixels) has been around for a while — it was suggested by CNET in 2018 and backed up by news outlet The Information in February 2021. Yet nearly a year later, supply chain analysts at Display Supply Chain Consultants (DSCC) predicted the resolution could actually weigh in at 4000 x 4000 pixels. DSCC’s report also claimed the panels would hit 4,000 pixels-per-inch (PPI), which contradicts a claim from The Elec of 3,000 PPI.

Then there’s the price. The Information set the tone with a prediction of $3,000, but just a month later, well-known analyst Ming-Chi Kuo said it would come with a far lower price tag of $1,000. Then in early 2022, the mercury rose once again, with DSCC’s report suggesting a price of “several thousand dollars.” Who knows what that means? Could be $2,000, could be $10,000.

And from what we can tell, Apple doesn’t even have a name nailed down yet. YouTuber Jon Prosser suggested Apple Glass in May 2020, but that was later shot down by Bloomberg reporter Mark Gurman, who pointed out the improbability of Apple’s headset sharing a name with the failed Google Glass. Gurman himself has suggested a variety of names, from Apple Vision to Apple Reality. Yet Gurman — who is one of the most trusted and well-connected Apple reporters out there — didn’t seem to know what name Apple has actually settled on. Perhaps Apple hasn’t even decided yet.

There are a few things analysts seem to agree on. The device will supposedly mix augmented and virtual reality, for example, and will probably be powered by two Apple Silicon chips. But those are small areas of consensus in a sea of contradictions.

All this uncertainty was fine a few years ago when it was widely acknowledged that the device was several years away from release, but that’s no longer the case. Both The Information and Ming-Chi Kuo have predicted an imminent launch. In fact, both assured people that Apple would announce the device in 2021 and start selling it in 2022. Yet that proved incorrect as reports emerged that Apple had delayed the launch, as it has done repeatedly over the years.

Although the 2021 date has passed, the implication is that Apple is almost ready to unveil its headset. Gurman, on the other hand, now believes the headset will either be revealed to the world in late 2022 or early 2023 — but even that isn’t too far off.

Analysts at Morgan Stanley have also chimed in, saying the flurry of patents Apple has been filing for its headset means the device is mirroring the Apple Watch in the months before its own release. The implication, in other words, is that we’re rapidly approaching the headset’s launch date.

Yet with so much uncertainty surrounding almost every aspect of the device, Apple is fast running out of time to perfect it. Unlike some of its rivals, Apple is not the type of company to release a half-baked product and then improve it over subsequent generations (cough, Samsung, cough). To me, that leaves two possibilities.

The first is that Apple simply gives up. We’ve had a recent precedent for this: AirPower. The multidevice charger was meant to let you place any wireless charging Apple device anywhere on the pad and it would still juice them up perfectly. Crucially, that was to include the Apple Watch, which uses a different charging standard than other Apple products

Yet Apple struggled with overheating issues and constantly delayed the project until it eventually threw in the towel. The headset is not quite at that level of humiliation yet — Apple hasn’t officially revealed it, after all, meaning the potential climbdown is easier — but with so many delays already, it feels like we’re not far off.

The second possibility is that Apple continues pushing its headset back again and again, postponing the launch date to well into 2023 at the earliest. This feels like the most likely option considering how much money Apple has undoubtedly plowed into the device. It’s one thing to cancel a wireless charging mat, but quite another to cancel something as advanced as a mixed-reality headset.

But with so little certainty in sight, I expect we’ll probably just continue muddling along for the next few months at least, with report after conflicting report emerging, never getting any closer to certainty. From what we can tell, Apple still seems to be narrowing down exactly what this product is.

After all this time, it seems Apple’s mixed-reality headset is no closer to being, well, a reality.

Facebook
Twitter
Pinterest
WhatsApp
Previous articleThe Galaxy S21 FE 5G Exynos is a potential bestseller, but at a steep price
Next articleQuietOn 3 vs. Bose Sleepbuds 2: White noise or no noise?