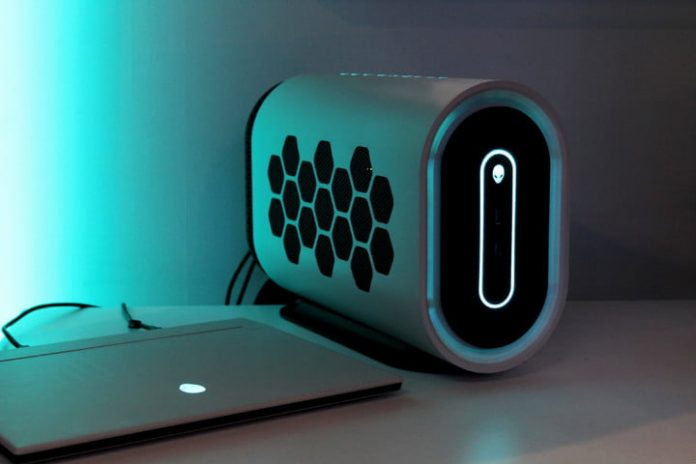 At CES 2022, Alienware has unveiled Concept Polaris, an external GPU enclosure with an undeniably cool look.

The idea of connecting an external GPU to your laptop over Thunderbolt has always been a neat but niche idea. But now probably isn’t the best time to talk about it. The scarcity and skyrocketing price of graphics cards in recent years thanks to the GPU shortage, has made it a complete nonstarter. Buying exorbitant prices for GPUs that will only be bottlenecked over the bandwidth of Thunderbolt sounds silly.

Still, Concept Polaris is just a project. And for what it is, it’s striking. The chassis has all the now-classic design elements we’ve come to expect in a modern Alienware product: White paint job, round edges, honeycomb cutouts, and the glowing white alien head, of course.

It looks even better here than it does in full towers like the Aurora.

Despite being fairly small, it can fit a full-length desktop graphics card, even something as enormous as an RTX 3090. How? Well, Alienware has removed the internal power supply out and replaced it with two AC power adapters. These external adapters could have as much as 425 watts of power each.

That unique port gave the enclosure more bandwidth than your standard Thunderbolt-powered external GPU, but it also meant it only worked with Alienware laptops that sported the proprietary port.

Concept Polaris fixes that by switching to a USB-C connection. Specifically, it can connect over USB-C 4, Thunderbolt 4, or Thunderbolt 3. That means you’ll get less performance from your expensive GPU, but it makes it far more versatile.

Other ports on the rear include USB-A, additional USB-C, and a 2.5Gb Ethernet jack.

The case no longer lifts off the rails like with the Alienware Graphics Amplifier, but instead right out the back. Like the Razer Core X, the entire interface rests on a tray that can be pulled out using a handle.

Concept Polaris can also be stood up on its side like a modern console — case on or not.

Lastly, this external GPU enclosure is liquid-cooled, using its 240mm “Cryo-Tech” solution, which is also used in its Alienware X-series gaming laptops. It even throws in its proprietary “Element 31” thermal material.

Again, Concept Polaris is not for sale. There’s no guarantee this product will ever see the light of day. But given Alienware’s past releases, it’s not hard to imagine something similar to Concept Polaris someday being available for purchase.