HomeNewsAdd Wireless CarPlay to Your Vehicle With Alpine's New 11-Inch Screen That...
News 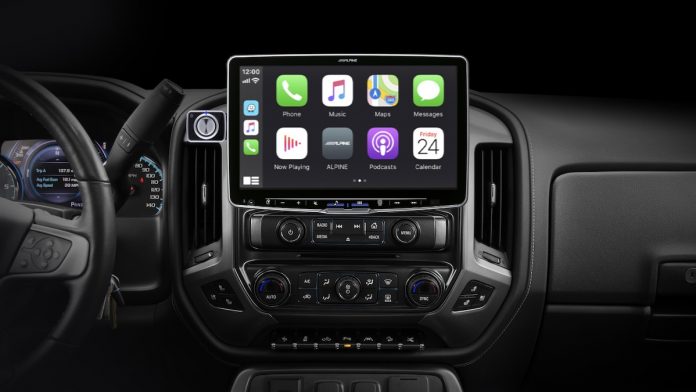 For those interested in adding wireless CarPlay to their vehicle on an aftermarket basis, Alpine today introduced its next-generation Halo receiver with an 11-inch capacitive touchscreen that hovers over the dashboard. Despite having such a large screen, the receiver has a single-DIN chassis, allowing it to be installed in a wide range of vehicles.

Alpine’s previous Halo receiver was limited to wired CarPlay, but the new iLX-F511 model includes support for both wired and wireless CarPlay and Android Auto, along with a higher-resolution 1280×720 display and high-resolution audio playback. The new receiver is also compatible with SiriusXM 360L, which offers both satellite radio and on-demand audio.

The screen can be tilted at four pre-set angles to better match the tilt and height of the dashboard, and other features of the receiver include hands-free Bluetooth phone calls outside of CarPlay, one HDMI input and output, one AUX input, two USB-A ports, rearview camera compatibility, iDatalink Maestro support, and more.

Alpine said the iLX-F511 will ship in February 2022 for a suggested price of $1,199.95 in the United States, and a smaller 9-inch iLX-F509 model will also be available for a suggested price of $999.95. Both units will be available at select car audio retailers.Related Roundup: CarPlayTags: Alpine, Wireless CarPlayRelated Forum: HomePod, HomeKit, CarPlay, Home & Auto Technology
This article, “Add Wireless CarPlay to Your Vehicle With Alpine’s New 11-Inch Screen That Hovers Over the Dashboard” first appeared on MacRumors.com