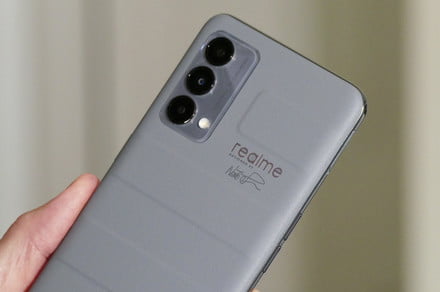 Smartphone company Realme’s first true flagship device, the Realme GT 2 Pro, will come with a truly wide-angle camera. How wide? It will take photos with a massive 150-degree field of view, far wider than the majority of competing phones, so you can capture more of the scene in front of you.

The GT 2 Pro’s main camera will have an 84-degree field of view, meaning you really will see the difference in viewpoint when you switch to the wide-angle camera on the phone. In addition, Realme will add a “fisheye” camera mode to the phone’s software, altering the perspective to take full advantage of the wide-angle camera for an unusual final photo.

News of the GT 2 Pro’s camera is joined by more details on the upcoming phone, including it having a real panel made from a sustainable bio-polymer material, and a design from long-time Realme collaborator, the Japanese industrial designer Naoto Fukasawa. The phone’s look is apparently inspired by paper, similar to different materials inspiring previous Fukasawa-designed Realme phones.

This information on the GT 2 Pro comes after it being revealed the phone will use Qualcomm’s latest Snapdragon 8 Gen 1 processor. It’s likely to be one of the first smartphones to use the chip, and while Realme has used Qualcomm’s top processor in the past — the Realme GT was powered by the Snapdragon 888 — the rest of the specification tended to be mid-range. Realme has said the GT 2 Pro will be a true flagship, and we’re keen to see what the rest of the spec will be, but we do know it will come with an ultra wide band antenna array for more reliable connectivity, a new Wi-Fi antenna design for improved reception, and a redesigned NFC antenna for better performance.

Realme has not shared any further information on the GT 2 Pro yet, or revealed what the phone will look like. Should further details be announced we will update here.