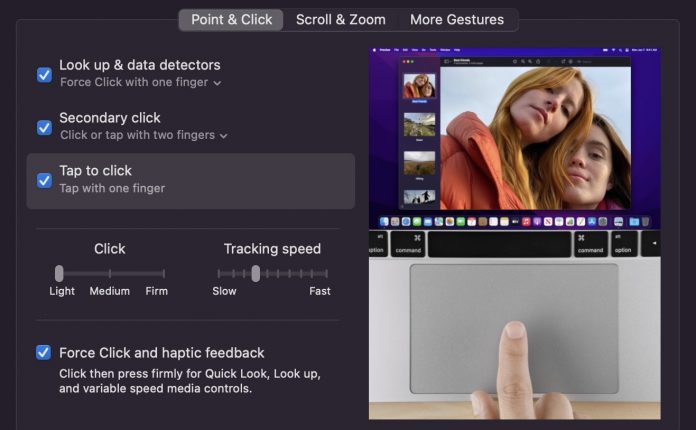 Apple today seeded the fourth beta of macOS Monterey 12.1 to developers for testing, and while the much-anticipated Universal Control feature is still not enabled, the latest beta does appear to resolve an issue with the “Tap to Click” trackpad gesture.

Since the release of macOS Monterey earlier this year, some users have reported that the “Tap to Click” trackpad gesture would intermittently fail to work. The issue appears to have affected a variety of Macs, ranging from the M1 MacBook Air with a built-in trackpad to an Intel-based iMac paired with a standalone Magic Trackpad.

Following the release of the fourth macOS 12.1 beta today, several users across the MacRumors Forums and Reddit have indicated that they are no longer experiencing issues with “Tap to Click” after updating to this version.

macOS 12.1 should be publicly released before the end of the year, with a key new feature being SharePlay, which will allow users to watch movies and TV shows, listen to music, and share their screen with friends and family on FaceTime calls. SharePlay is already available on iOS 15.1, iPadOS 15.1, and tvOS 15.1.Related Roundup: macOS MontereyRelated Forum: macOS Monterey
This article, “Latest macOS 12.1 Beta Appears to Fix Intermittent ‘Tap to Click’ Issue” first appeared on MacRumors.com