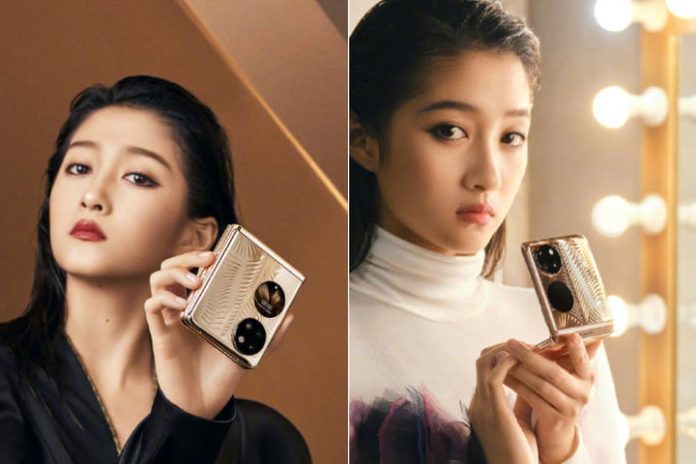 Huawei recently started dropping teasers for its first clamshell-style foldable phone. The company then went a step ahead and revealed a practical yet rather cliched name for it — Huawei P50 Pocket. The phone is going official later this month, but Harper’s Bazaar China got a first-look with a glamorous photoshoot and shared the results on social media. In one word, the phone looks extravagant. Folks with a conservative taste will classify it as luxuriously garish.

The Huawei foldable retains the DNA of its P50 flagship sibling, thanks to two huge circular cutouts at the back. The one at the top appears to house three camera lenses and the LED flash. Below it sits a circular secondary display that will likely show notifications and also serve as a viewfinder for clicking selfies using the high-resolution rear snappers. The Samsung Galaxy Z Flip 3 and Motorola’s RAZR 5G also come armed with the same trick.

The hinge design on Huawei P50 Pocket looks similar to the one we saw on Samsung’s own clamshell foldable. The fingerprint sensor is embedded inside the recessed power button, while the frame appears to have a metallic luster. The exterior has an unapologetically bright gold finish with leaf patterns on it. However, Huawei’s official teaser on Weibo also shows a silver trim with a pearl white surface texture. The phone is definitely quite a sight and looks like a statement piece.

You probably won’t find it in a nearby store

Unfortunately, it is unlikely to make it outside the U.S. market, just like the flagship Huawei P50 series phones. The company has been put on a government blacklist that imposes a few crucial restrictions on doing business with American brands. One of those restrictions prevents Huawei phones from accessing Google Mobiles Services, which includes core offerings such as the Google Play Store, Gmail, Maps, etc. As such, Huawei phones won’t find a wide appeal in markets where Google’s services are part of people’s daily smartphone lives. The Huawei P50 Pocket is going to be no different.

Android’s open-source status allows Huawei to run a barebones version of it on phones and tablets, but crucial Google services are still missing. To make up for it, Huawei is working on an in-house operating system called Harmony OS and also has its own app repository. While the company continues to claw its way back to the top in the Chinese market, the prospects of a return to international fame look bleak. A bombshell investigation by The Washington Post recently uncovered the company’s ties with China’s oppressive surveillance program that has raised multiple human rights alarms.