HomeHow toHow to appear offline on Xbox Series X
How to

How to appear offline on Xbox Series X 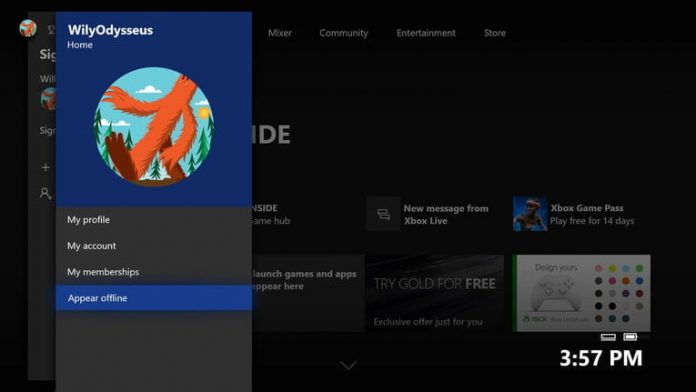 Sometimes, you might want to play your Xbox Series X alone, without anyone inviting you to a party chat or game. Sure, you can tell your friends you aren’t available, but there’s an easier solution: Appearing offline! Even when playing online or being connected to the internet, Microsoft gives Xbox users the ability to appear offline, and there are a couple of different ways to do so. This makes it so that your gamertag will literally appear as “offline,” preventing you from getting an awkward invite from a friend. But how does this feature work? Here’s how to appear offline on Xbox Series X.

Appear offline to everyone

Appearing offline to all players, including those who aren’t on your friends list, is doable in just a few steps.

Step 1: After you’ve signed into your Xbox account on your system, press the Xbox button to open up the quick menu.

Step 2: Tab over to your profile, as indicated by your gamer picture, and select your profile. It should show your Xbox Live status as well as your gamertag and is the first option under Profile & System.

Step 4: From here, you’ll see three options on the right-hand side of the screen — the first of which is Appear Offline — with a drop-down arrow next to it. Here, you can select between appearing on and offline, as well as setting your status to Do Not Disturb. Boom! You’ve just appeared offline. To revert back to normal, follow the same steps and switch it back to Appear Online.

The other method is done within the system settings and allows you to customize who can see your online status. This gives you more flexibility and can be useful if you want to control what other players see when looking at your profile.

Step 1: Press the Xbox button once again, and tab all the way to the right to your profile. Then, scroll down to Settings and select it.

Step 3: Then, select Xbox Privacy at the top. You’ll be taken to a menu that has a few checkboxes, with an option to View Details and Customize toward the bottom. Pick that one.

Note that there are numerous privacy options that can be altered on the previous page by visiting the Profile menu.

And with that, you’ll be much better equipped to customize your profile settings on Xbox Series X. Now, you’ll be able to play games without getting invites from other players (hopefully).

How to appear offline on Xbox Series X

How to connect your iPhone to a Samsung TV

The best Combat Shotgun loadouts in Call of Duty: Vanguard