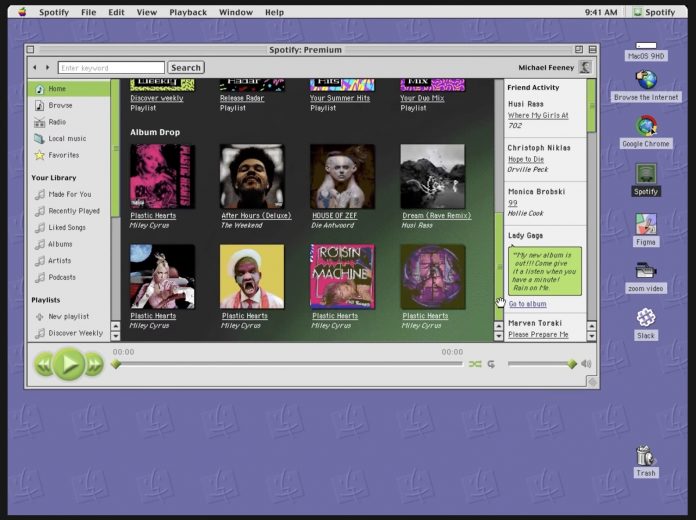 Spotify and Slack weren’t even a thing 22 years ago, but driven by curiosity and an interest in the evolution of user interfaces, graphic designer Michael Feeney has painstakingly reimagined several modern macOS 12 applications to see what they would have looked like in the Mac OS 9 era.

In order to realize “(mac)OStalgia,” Feeney first went back and analyzed the Mac OS 9 environment using the SheepShaver emulator, and then created a library of UI components that he could reuse throughout the project.

He then took a number of apps crucial to his daily workflow, including Spotify, Slack, Zoom, Figma, TextEdit, and Google Chrome, and gave their UIs the Mac OS 9 treatment. The results of Feeney’s project are impressive, as you can see in the embedded video below.

As for what stood out the most in terms of the differences between the user interface and user experience, Feeney says:

Even though Design and UI trends definitely changed a lot in the past 20 years, applications still behave and look (somehow, aesthetic aside) very similar. After all, it is indeed difficult to replace well installed behaviour such as visual feedback on hover, scroll for more content, double click to launch application, etc. Basically, because our Operating Systems still behave in a similar way, so did the UI and the UX of many of our apps.  One area where both UI and UX improved dramatically as part of the operating systems is on the accessibility front. The apparition (and improvement) of a full-fletched Voice Control, integrated screen readers, dark mode, etc. is definitely what stood out the most looking back at Mac OS 9.

Mac OS 9 was introduced in October 23, 1999, and featured internet support out of the box with Internet Explorer, an email client, text-to-speech, and Sherlock 2.0 – the built-in tool that let users search their computer and the internet, and the direct ancestor of Spotlight in macOS. Apple discontinued development of Mac OS 9 in 2001 and it was succeeded by Mac OS X.

Feeney’s Mac OS 9: UI Kit is available to download for free, for use by the Figma community and in personal projects as well.
This article, “Here’s What Your Favorite Mac Apps Would Have Looked Like in 1999” first appeared on MacRumors.com

Facebook
Twitter
Pinterest
WhatsApp
Previous articleHere’s what to spend that PSN gift card on!
Next articleGet the snazziest case for your brand new Moto G Power (2022)