HomeNewsYou can now install any Android app on Windows 11 with a...
News 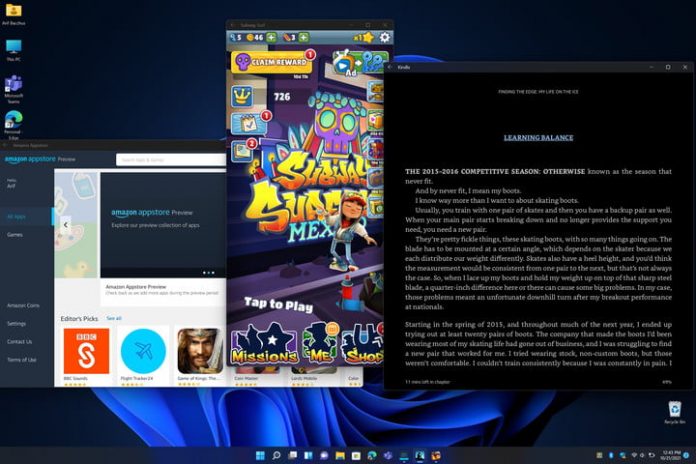 Android apps arrived on Windows 11 not too long ago, but there’s still one big issue: Windows only supports the Amazon Android app store, which has less than a fourth of the apps that can be found on Google Play. But there’s a solution in the form of WSATools, a utility from engineering student Simone Franco that not only allows you to install any Android app, but also makes the process much easier.

Around the time of the announcement of Windows 11, we received confirmation that users would be able to sideload, or unofficially install, any Android app on Windows 11. The problem is that the process is tedious. It requires multiple downloads from separate sources, a lot of tweaking, and some time in the command line.

WSATools deals with all of that in the background. After you load it up, it will automatically install the Android Debug Bridge (ADB) — essential for sideloading apps — and ask what Android app you want to install. The process is as seamless as installing Android apps through the Amazon Appstore.

And that’s great news because Android apps work excellently on Windows 11. The limited number of available apps on Amazon work well, as do many APKs — the file extension associated with Android apps. It’s important to note that performance when sideloading apps can’t be guaranteed, so proceed at your own risk.

To access Android apps on Windows 11 right now, you need to be a Windows Insider (we have guidance on how to join in our how to install Windows 11 guide). You also need WSATools from the Microsoft Store, which was just updated to fix a bug that caused ADB installation to get stuck.

Although sideloading Android apps is much easier on Windows 11 now, it’s not without risks. The most important thing to know is that a sideload is an unofficial install. At best, that could mean apps don’t perform as well as they do on native hardware, or that you run into bugs that developers may not be inclined to fix.

At worst, you could encounter malicious code. You can’t just download an APK file from Google Play, so you have to seek out third-party sources. APKMirror is one of the more trustworthy options, as the site doesn’t host any pirated or paid apps. It also cross-checks unchangeable APK certificates to verify that apps are legit (make sure to look for an icon indicating this is the case).

Still, sideloading carries risks regardless of the installation method or source of the APK, so proceed at your own risk. Although we always knew that users would be able to sideload Android apps on Windows 11, it’s nice to see the community take advantage of Android’s open-source nature to make the process easier.