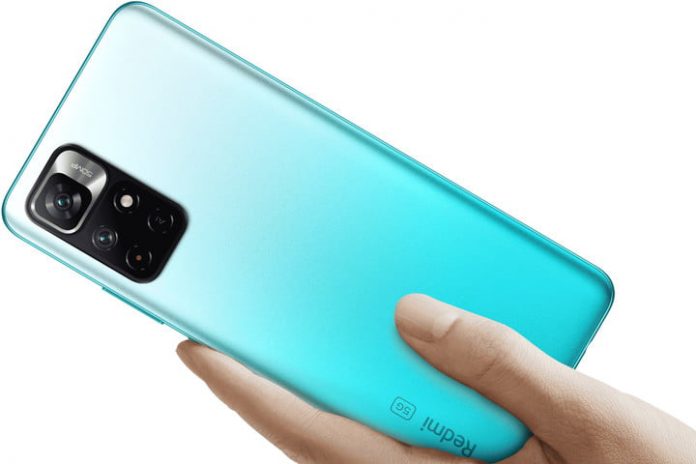 The Redmi Note 11T is a fairly large phone with a 6.6-inch FHD+, 90Hz IPS-LCD panel, and a 5,000mAh battery. The phone also supports an adaptive refresh rate wherein the device automatically adjusts the screen refresh rate depending on the type of content being displayed. The Redmi Note 11T is also among the few devices in its price range to offer stereo speakers. It’s also IP53 rated for dust and water resistance.

The Redmi Note 11T is sold as the Poco M4 Pro 5G in Europe. Redmi

Unsurprisingly, the Redmi Note 11T uses the same processor — the MediaTek Dimensity 810 — as its other two siblings. Based on a 6nm manufacturing process, the Dimensity 810 is a fairly new chip announced in August 2021. The processor offers a minor performance jump over the older Dimensity 800 chip. This octa-core processor gets four ARM Cortex-A76 cores (clocked up to 2.4GHz) and four ARM Cortex-A55 cores clocked at up to 2GHz. In addition, the chip is 5G-ready and offers support for Wi-Fi 5 and Bluetooth 5.1. Redmi claims that the new phone offers 20 percent better graphics performance over its predecessor — the Redmi Note 10T 5G.

The massive camera bump on the Redmi Note 11T with five round cutouts is somewhat misleading at first glance because it actually only houses two cameras and a single LED flash. The camera hardware consists of a 50-megapixel primary sensor, and an 8MP secondary sensor mated to an ultrawide lens with a 119-degree field of view. At the front, the Redmi Note 11T gets a 16MP camera housed inside a punch-hole cutout.

The Redmi Note 11T runs MIUI 12.5 based on Android 11 and should receive an official update to Android 12 in the near future. The phone ships with a 33-watt fast charger in India that has a claimed charge time of 60 minutes to reach full from empty. The Redmi Note 11T comes in three variants in India. Here are the details of each of these variants, along with their prices.

As mentioned earlier, the phone is quite a bit cheaper than the Poco M4 Pro sold in Europe, where the base 64GB variant starts at $270 and the top-end 8/128GB variant retails for $290. The Redmi Note 11T goes on sale across India starting December 7 and will be available in Stardust White, Aquamarine Blue, and Matte Black color options.

Facebook
Twitter
Pinterest
WhatsApp
Previous articleWhere to buy a 27-inch monitor with delivery in time for Christmas
Next articleiPad 10.2 probably won’t arrive for Christmas — but this iPad will
- Advertisment -