HomeNewsWindows 11 is blocking an app that lets you switch browsers to...
News 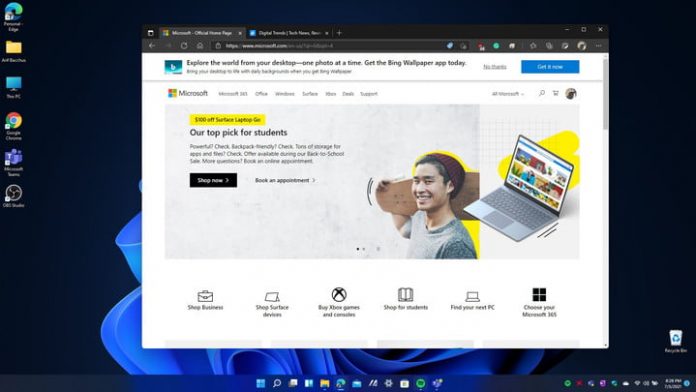 The discovery was made in a new build of Windows 11 through the Insider Program, where Microsoft is now blocking applications that sidestep certain restrictions to change web browsers within the operating system.

You can still change your default web browser to Chrome or Firefox, but as Windows users know, this won’t apply to every situation found in Windows. That’s due to something called the “edge:// protocol,” which a method used by Microsoft within certain elements in Windows, such as the News and Interest widgets.

The protocol ensures that it’ll only open URL links in its Edge browser. It’s implemented within Windows Search as well. Understandably, it’s been a controversial feature as it even circumvents a user’s default browser choice.

Developers have offered alternative apps, such as EdgeDeflector, that allow you to redirect links to a preferred browser, but Microsoft has now made such workarounds worthless through the latest Windows 11 update (build 22494), which is currently available for Insider members.

The developer of EdgeDeflector — home to 500,000 users — has confirmed that Microsoft has effectively disabled his application. As stated in the blog post, the developer, Daniel Aleksandersen, insists that “this isn’t a bug in the Windows Insider preview build. Microsoft has made specific changes to how Windows handles the microsoft-edge:// protocol.”

He added that while he can technically provide a way to bypass Microsoft’s strategy to make apps like EdgeDeflector futile, it would require “destructive changes” to Windows. These alterations to the program’s code would cause several issues for users, the developer stressed. Aleksandersen has thus decided to cease updating the app.

Your web browser is probably the most important — if not the only — app you regularly use.

Aleksandersen states that the move by Microsoft is an anticompetitive practice that regulators “just haven’t caught up with yet.”

“Your web browser is probably the most important — if not the only — app you regularly use. Microsoft has made it clear that its priorities for Windows don’t align with its users’.”

This change is only effective in future builds of Windows 11, so as of now, it’s only a preview of what’s to come.