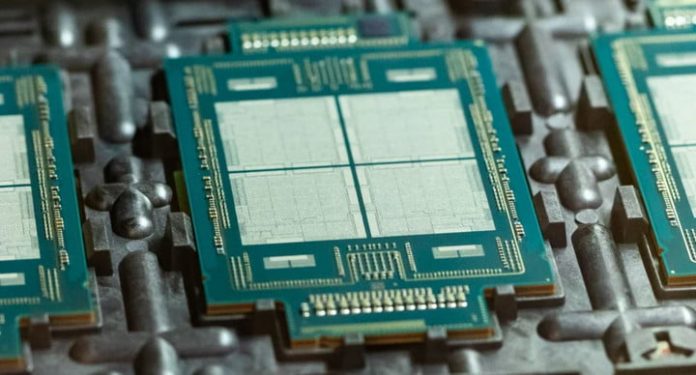 Intel Alder Lake processors have taken the market by storm, securing their place among the best processors of the year. However, it’s no surprise that Intel is already looing to the future.

The 13th and 14th generations of Intel processors are in the works. New images have emerged, showcasing the upcoming 14th-gen Intel CPUs. The photos display several different chips that are likely to release in 2022 and 2023.

Stephen Shankland from CNET took a tour of the inside of Intel’s chipmaking factory, the Intel Fab 42 located in Chandler, Arizona. He came back with several high-quality images of the upcoming chips that won’t hit the market for at least another year, and in some cases, even two years.

Among the upcoming chips, Shankland also found an Intel Ponte Vecchio CPU that’s set to release in 2022. This is a high-performance data center accelerator that Intel claims is going to be twice as powerful as initially planned.

Perhaps the most interesting reveal is the wafer of the upcoming Meteor Lake chip. Pictured above is a 300mm wafer that features hundreds of test chips of the Intel Meteor Lake-M, which is likely going to be Intel’s power-efficient series of 14th-Generation processors. Although it’s not confirmed whether these chips are part of the M-series of CPUs, their size definitely hints toward just that.

Meteor Lake-M processors are rumored to operate on ultralow power requirements, needing only between 5 watts and 15W to function. While the images are clear, it’s hard to judge the purpose of each and every tile on the chip.

The chip has previously been confirmed to be built using Foveros packaging technology, allowing the use of up to three tiles through stacking chiplets into a full processor. The first tile used would be the computer die, followed by a system on a chip (SoC) LP die, and lastly, a graphics die. Meteor Lake-M might also feature anywhere between 96 and 192 execution units (EUs).

The design of Intel’s 14th-Generation of processors is interesting. The use of SoC ( makes it similar to Apple’s latest and greatest, the M1 Max chip, which was also the brand’s first SoC-based system. Intel’s 12th-Gen CPUs currently perform very well when compared to Apple’s M1 Max. As Apple has plans of its own when it comes to improving its signature chip, it’s likely that the two tech giants will continue to go head-to-head when it comes to the CPU race.

Considering that the current-generation Intel Alder Lake processors feature up to 96 execution units, Meteor Lake with its rumored 192 EUs has the potential to be incredibly powerful. However, before these CPUs ever see the light of day, Intel Raptor Lake will be released first — likely in the last quarter of 2022.