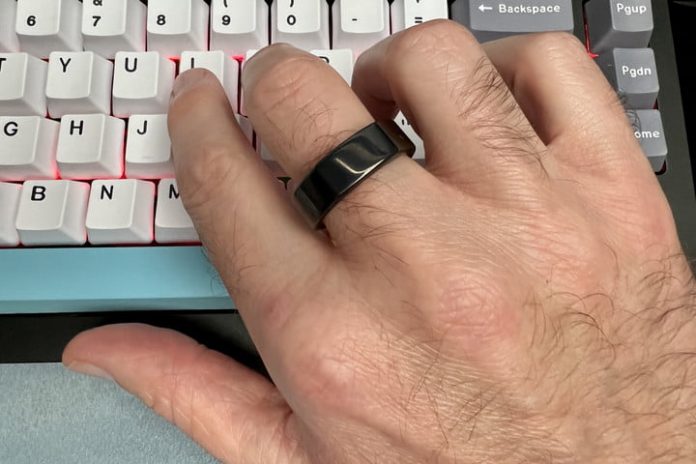 Out of all the wearable tech I’ve reviewed, the Oura Ring is the one I’ve worn the longest and didn’t stop wearing after the review was complete. Since beginning the review process of the second-generation model at the end of June, I have worn the Oura Ring ever since to track my sleep and movement each day. When the chance came to try the third-generation model, I was incredibly pleased to do so.

I’ve been wearing the new model for about two weeks now, and although the embargo on reviews is now up, it’s still in the process of collecting data from my sleep and exercise patterns, plus a firmware update has just arrived. Also, not all the new features inside the third-generation Oura Ring have been enabled yet. Therefore, I’ll talk about the third-generation Oura Ring in general and my experience so far, but my full review will wait for a while.

There’s a simple reason why I’ve worn the Oura Ring so much — it’s because it’s so convenient. It’s on my finger and not my wrist, so I don’t have to choose between it and a traditional watch or an Apple Watch. It’s also so light and comfortable I forget it’s on, and that includes wearing it overnight. Has that changed with the third-generation model?

No, it has not. Since swapping out my second-generation model for the third generation, it has stayed on my finger in the same way. Before the Oura Ring, I did not wear rings at all and had generally found them uncomfortable. Wearing the Oura Ring on my middle finger, I’ve subsequently got used to it and barely notice it at all.

The other thing that hasn’t changed is the design. The third-generation Oura Ring looks identical to the second generation, and is the same size and weight, coming in at 2.55mm thick and weighing six grams or less depending on the size. It’s available in the same shades as before — silver, black, stealth, or gold — but only in the Heritage design with a flat section on the otherwise round ring. It’s still made from titanium, has a non-allergenic inner material, and is water-resistant to 100 meters.

However, I have noticed one thing. Before you order an Oura Ring, it’s recommended you use one of the company’s sizing kits to check which one will suit you best. In June, I chose a size 11, second-generation Oura Ring in the stealth color. I was then sent a sizing kit for the third-generation model, and once again wore one of the dummy rings for a day to check sizes. Once again, I decided on a size 11, but this time went for the black version.

Technically the only change is the color, as there are no differences between the size, shape, and weight of the hardware. Yet, the new third-generation ring feels more secure on my finger. I chose size 11 because it’s not too tight, and while I wouldn’t want it any smaller, the second-generation ring did slip around more than the third generation. It’s definitely not a complaint, but something I have noticed repeatedly since putting on the new Oura Ring.

The third-generation Oura Ring has an improved heart rate sensor and additional temperature sensors, enabling it to deliver more accurate and detailed information, track workouts, and monitor your activity throughout the day. Well, eventually, it will because not everything is available yet. SpO2 blood oxygen readings are missing, and the workout tracking will come later, as will guided meditation sessions.

Right now, it’s still learning my habits and body response, but initial impressions are good. It shows your data, then provides easy-to-follow analysis to help you interpret it. I have not received any restorative time information yet, and my daytime heart rate data is incomplete. Oura says it will take a couple of weeks for the ring and app to provide personalized data and assistance, so this is to be expected.

Outside of this, the Oura Ring app connects with Apple Health and Google Fit, and reliably imports workouts from those platforms. The data in the app’s Readiness and Sleep sections is both informative and easy to understand, plus it’s in-depth enough to be beneficial. The app’s design hasn’t changed, which is a good thing — it’s uncluttered and simply laid out. It’s not packed with data and only provides what you need to know, making it suitable for everyone. While I can’t benefit from it, the Oura Ring now supports Period Prediction, and this feature is live right now.

It’s a waiting game to get the best out of the new Oura Ring, which is a little frustrating, but the technology, engineering, and build quality remain superb, and the app is one of the best I’ve used with a piece of wearable tech.

The third-generation Oura Ring’s battery is quoted as delivering between four and seven days of use before it needs a recharge. Where the second-generation model lasted me seven days, the third generation is really down to five days. However, giving it a short charge each morning when you shower or have breakfast means it’ll likely never get to the point where it requires a full new charge. It’s supplied with a new charging plinth, but it also works with the plinth that came with the second-generation version, so if you do upgrade, you’ll have a spare.

With the new model, I changed to the black version, which has a dark glossy finish, compared to the matte gray of the stealth version I chose before. I’ve worn the second-generation Stealth Oura Ring for the last five months, and it has stood up to the daily rigors of life quite well, showing only minor scratches on the very edge, and only on the underside of the ring, where it will most often meet hard surfaces.

I’m interested to see how the gloss black model compares after a similar amount of time. It does show more smudges, but in my opinion, actually looks classier. The dark color also makes it look a little smaller on my finger compared to the stealth version.

Promise of the future

The third-generation Oura Ring hasn’t shown its full potential yet. Not just because it’s still working out my baselines to provide truly tailored feedback, but also because many of the big new features are still coming soon. Unfortunately, there’s no firm release date for the SpO2 readings, guided mediation sessions,or the insights into your workouts based on the recorded heart rate outside of late this year and into next. Based on the data and information already available, and how helpful it is, I’m really looking forward to seeing how the third-generation Ring’s software platform evolves.

There’s also the introduction of the Oura Membership, which will cost $7 per month and will provide as-yet-unseen features, insights, and the aforementioned guided audio meditations. Six months free membership is offered with the Oura Ring, but at the moment, there doesn’t seem to be any benefits at all, so your “free” days are ticking away without you actually getting anything for it should you buy the third-generation version now.

The Oura Ring is already a recommended purchase, and even the slight improvements available at this stage make it even better for newcomers. It’s an innovative, exciting, and technically impressive piece of wearable technology. Assuming Oura delivers the promised updates in a timely fashion, it’s only then that the third generation will be a worthy upgrade for existing Oura owners. Right now, you won’t really notice that much new in terms of features.

The third-generation Oura Ring costs $299 for the silver or black version, or $399 for the sealth or gold model. It’s available to purchase through Oura’s online store now.

These Chromeboxes provide years of updates and small footprints