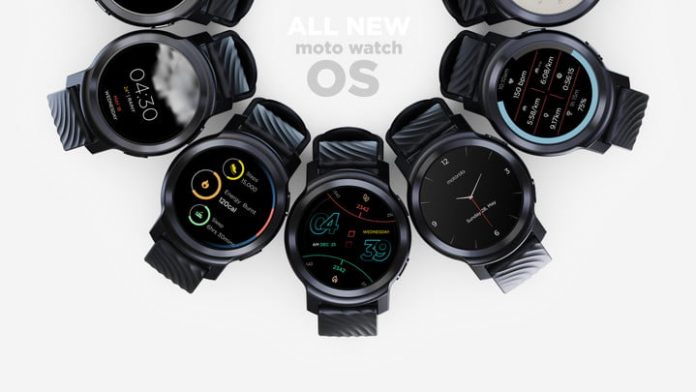 A new Motorola-branded smartwatch, the Moto Watch 100, has been in the works for months now, with the chip shortage being a major factor in its delay. Now, the wearable is on the cusp of launch — and a new leak from Evan Blass (@evleaks on Twitter) says it may not be running Google’s Wear OS as expected.

The Moto Watch 100 is a cheap Motorola-branded watch by CE Brands that’s had some of its specifications leak earlier. As far as hardware goes, it will be quite standard, should the rumors pan out. It’ll be a light watch at 29 grams, with a 355mAh battery and support for Bluetooth 5.0. All the old familiar sensors, from accelerometers to gyroscopes, are there, and it’ll be a fitness-focused watch. What is interesting about this watch is the alleged choice of operating system. Rather than adopting Google’s Wear OS as expected, the Motorola Watch 100 will, according to Blass, run an all-new Moto Watch OS.

The Motorola smartwatch brand owner is not the only smartwatch maker to roll out its own operating system. Another prominent Android phone maker, OnePlus, has done so recently with the OnePlus Watch and its real-time operating system (RTOS). The main disadvantage with this approach is that there is a lack of third-party app support compared to more mainstream smartwatches. When one considers how smartwatches end up being used in practice, it may not be such a huge loss if the basic fitness-tracking features sync up with your smartphone.

It may be all the same to your average person, but this poses a challenge for Google despite Samsung recently returning to the fold. Smartphone makers are used to making Android phones simply because they have no real choice. With Wear OS-powered watches being massively outsold by the Apple Watch (and Google’s own lackadaisical treatment of the platform), watchmakers may try to break away from Google.

Even with Google’s Wear OS 3 being by all accounts an excellent revamp, the smartwatch market might still end up fragmented between different unrelated operating systems for the foreseeable future.