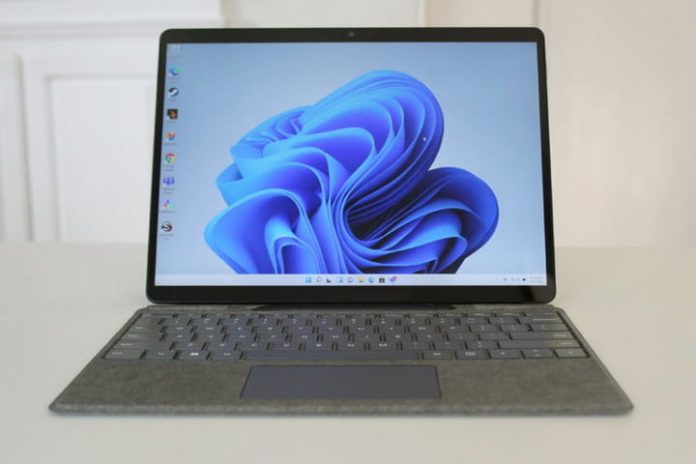 If you’re shopping for a new Surface, the chances are you’ll find both the Surface Pro 8 and the Surface Laptop Studio on shelves alongside devices like the Surface Go 3. These two Windows 11 flagship devices might share the Microsoft Surface name, but in reality, they’re quite different.

The Surface Pro 8 is meant to be more of a tablet and desktop hybrid, while the Laptop Studio is more of a full-on desktop replacement. We actually reviewed both devices, which is why we put together this guide comparing price, portability, design, and so much more to help you with your buying choices.

We always like to start with price first, and in this area, the Pro 8 and Laptop Studio are similar. Both devices are priced above $1,000, making them expensive ventures. If you’re after a budget device, the Surface Go 3 is probably a better buy, since it’s closer to an iPad.

The Surface Pro 8 starts at $1,100 for the Core i5 model with 8GB of RAM and a 128GB solid-state drive. That does not include a Type Cover Keyboard or a Surface Slim Pen 2. The Surface Pro Signature Keyboard with the Slim Pen 2 is an additional $280.

That makes the Laptop Studio a lot more expensive than the Pro 8. However, you do need to keep in mind that for the Laptop Studio’s price, you’re getting a keyboard included and a GPU as well. There’s a lot of raw power for the price, as we get into later.

The Surface Pro 8 is a lot like a traditional tablet when it comes to design. Microsoft slimmed the bezels down a bit on the device and made the screen bigger compared to previous generations at 13 inches. Weighing in at 1.96 pounds and measuring in at 0.37 inches in thickness, it is 0.04 inches thicker and 0.22 pounds heavier than the Surface Pro 7. It also has the signature kickstand, which lets you prop it in your lap.

Note the Pro 8 comes in both Graphite and Platinum. Regardless of which color you choose, you’ll get a device that’s made out of recycled aluminum instead of magnesium. It’s part of the reason why it’s heavier. Also factoring into the weight is the Type Cover. The Type Cover now has room for the Slim Pen 2, so it can wirelessly recharge.

Microsoft also mentions that you can have the SSD replaced on the Pro 8 and Laptop Studio. The Pro 8’s SSD is under the kickstand, but the Laptop Studio’s is under the base and requires a lot of tools for removal.

There’s also a Studio Mode where you can pull the screen down all the way to the keyboard deck. In this mode, the Studio resembles a Surface Pro 8 tablet, but it’s a lot thicker and heavier. Microsoft says this mode is suitable for artists who use the Surface Pen a lot.

Supporting those movements between modes is a special fabric hinge behind the screen, which is both fluid and easy to use. The hinge is held in place by magnets that help guide it around.

Yet another signature design feature on the Laptop Studio is its bottom hump. This allows for air ventilation as well as a place for the GPU.

Ultimately, if you really want a quirky device, then the Laptop Studio is for you. This is unlike any other laptop, with a unique hinge design and multiple modes (like a 2-in-1), but it still works really well as a dedicated laptop. The Pro 8 remains more like a traditional tablet and is more portable and petite.

The Surface Pro 8 and Surface Laptop Studio are also similar when it comes to performance. Both devices are powered by 11th-generation quad-core Intel processors.

However, the Laptop Studio does have a performance boost thanks to its higher base model CPU. That includes the Intel Core i5-11300H, as well as a more expensive mid-range $2,100 version with the Intel Core i7-11370H.

Jumping between Core i5 and Core i7 is a $500 difference. Both of these processors are powerful regardless, so be wary of that. Yet, you’ll only find the added benefit of a dedicated GPU, the Nvidia Geforce RX 3050Ti, on the Core i7 model of the Surface Laptop Studio. So, if you need a lot of raw CPU and GPU power, then the Core i7 option is a better bet for the higher price of $2,100.

For general web browsing and light tasks, the Core i5 is fine, but for more demanding things like light gaming or video editing, you might want to jump to the Core i7 option. That’s because, on the Surface Pro 8, there’s no dedicated GPU. You’ll want a powerful CPU that won’t throttle. But do keep in mind that you can connect an external GPU via the Thunderbolt 4 port on the Pro 8 if you need extra power.

In terms of our in-house lab testing, the Surface Pro 8 performed very well for a tablet in its class. On a top-end model with the Core i7-1185G7, in Cinebench, Handbrake, and PC Mark 10 tests, the Pro 8 passed other 2-in-1’s like the ThinkPad X12 or Latitude 7320 detachable.

As for Laptop Studio, it’s a bit special, as the device can balance CPU and GPU power. In demanding tasks and real-life tasks like the PugetBench Premiere Pro benchmark, the Laptop Studio surpassed other laptops in its class. The CPU, though, is limited by being quad-core. You can find 8-core CPUs in other devices for the same price.

The GPU in the Laptop Studio did do well, however. in Civilization VI, the game ran on the device at 105 frames per second when playing on medium settings. The Laptop Studio performs admirably in more GPU-heavy games and struggles in titles that lean more on CPU performance.

For performance, the Laptop Studio has the upper hand since it has an option for a GPU. It’s more expensive, but it also can be a light gaming laptop and a solid video editing machine. For everything else and lighter tasks, the Pro 8 is a more cost-effective solution.

When it comes to the display on the Surface Pro 8 versus the Laptop Studio, things are pretty much on even footing. Both screens will be vibrant, and both support touch as well as the new haptics with the Slim Pen 2. There’s also support for the 120Hz refresh rate on both devices. This is so that inking and writing on these displays will feel life-like and like putting pen to paper. It also benefits Windows 11, which has a lot of great animations.

Portability comes down to webcams, battery life, and ports. In these areas, it’s another even match. The Surface Pro 8 has two USB-C Thunderbolt 4 ports, a headphone jack, and a Surface Connect port. Thunderbolt 4 is new on all top-end Surface devices this year and lets you experience faster data transfer speeds, plus support for external GPUs and dual 4K monitors.

The Surface Laptop Studio has the same exact ports, too. It’s an even match, and you’ll need a dongle regardless of which device you buy.

As far as battery life, the Laptop Studio averages about 9 to 10 hours in general day-to-day usage. The Pro 8 also reached that battery life level. These are well off Microsoft’s claims of 19 hours and 16 hours, though if you lower screen brightness and restrict yourself to light tasks, you can stretch it by a few more hours.

Invest in the Laptop Studio

If you’re hoping to choose between Laptop Studio and Pro 8, we suggest going for the Laptop Studio. It’s slightly more expensive, but it has more modes of use, more power, an optional GPU, and better value for the price. Not everyone can afford an expensive device like that, so the Pro 8 is better if you’re on a budget. But seeing that the difference is only $400, a little extra money can go a long way.