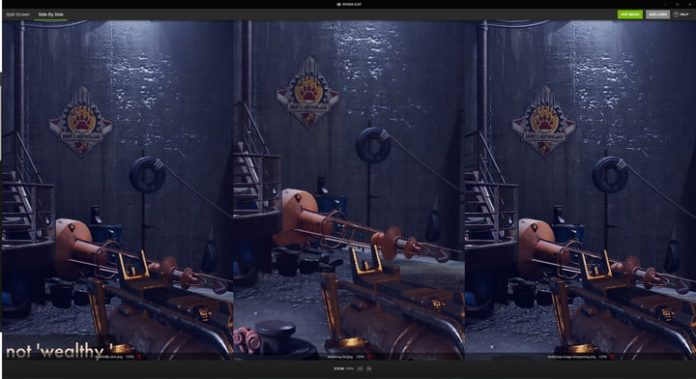 Nvidia is updating and releasing a few upscaling utilities to compete against AMD’s FidelityFX Super Resolution (FSR). The main feature is called Nvidia Image Scaling, and although it has been available through the Nvidia Control Panel since 2019, it’s now easier to access and comes with a new upscaling algorithm.

Don’t confuse Image Scaling with Nvidia’s Deep Learning Super Sampling (DLSS) feature. Both are upscalers that improve your gaming performance while maintaining the highest-quality image possible, but they achieve this goal in very different ways. Image Scaling is a spatial upscaler and sharpening filter in the vein of FSR, while DLSS uses temporal (time-based) information and machine learning for a better-looking image overall.

The feature also includes a new upscaling algorithm, as well as a sharpening filter that you can adjust on a per-game basis. For image quality, you shouldn’t expect much — Image Scaling is essentially the same as FSR, and it produces similar image quality and performance (read our AMD FidelityFX Super Resolution review for more on that).

This move is part of an effort from Nvidia to compare image quality instead of performance when it comes to different upscaling tools. AMD’s FSR offers a higher performance ceiling than DLSS does, though at the cost of image quality. Image Scaling looks like a way to bring the scales back in balance. It’s essentially just Nvidia’s version of FSR.

To that end, Nvidia released a new image comparison tool called ICAT. It works with videos and photos, allowing you to line up and zoom in on media files to see the differences in image quality. It’s available for free on Nvidia’s website, and we downloaded it to create a quick screenshot comparison in Deathloop. In case you can’t make out the file names, DLSS is on the left, FSR is in the center, and Image Scaling is on the right.

Nvidia also released a new version of DLSS, though there’s not a lot to get excited about. DLSS 2.3 is the latest version, and it’s available in games like Cyberpunk 2077 and Doom Eternal today. You shouldn’t notice a major difference in image quality, though. The new version improves stability with fine details and reduces ghosting, but those differences are only clear when you zoom in and focus on a particular area in a scene.

Image Scaling is a “new” feature, but it has been around for a while. In August, it was revealed that FSR uses the same upscaling filter that Nvidia Image Scaling has used since 2019. The updated version doesn’t change much under the hood — it just seems like a feature Nvidia now wants users to actually take advantage of, as well as a way to combat FSR.

You can download and start using Nvidia Image Scaling now. It works across optimized games and all Nvidia GPUs through GeForce Experience, as a stand-alone in-game option for Nvidia and AMD GPUs, and through Nvidia Control Panel for all games and Nvidia GPUs. Make sure to read our Image Scaling explainer to learn about all of the ways to enable it.

Facebook
Twitter
Pinterest
WhatsApp
Previous articleThis is the best MacBook Pro Black Friday deal you can shop today
Next articleWhat is Nvidia Image Scaling? How to use the upscaling feature
- Advertisment -