HomeNewsMSI unleashes a pair of gaming monitors, including a monster 55-inch OLED
News 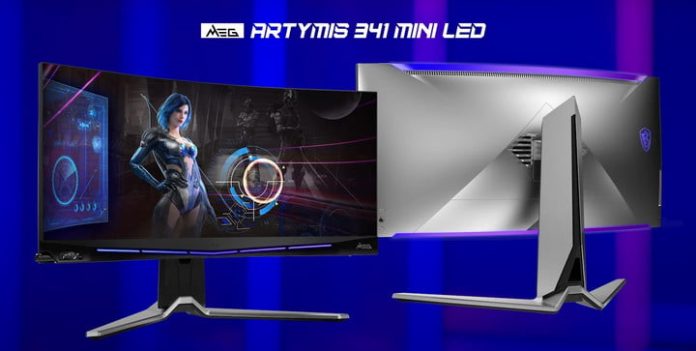 MSI announced the upcoming launch of two gaming monitors, both of which bring something new to the market.

The first screen has a curved mini-LED display with a 165Hz refresh rate that promises excellent color reproduction thanks to a number of technologies, including MSI’s own premium quantum dot films. The second display is a massive 55-inch OLED monitor directed at console gamers.

MEG Artymis 341 has a 34-inch screen with a native resolution of 3440 x 1440 and a 21:9 aspect ratio. The technology used in its creation lends itself to producing a wide color range and a high-quality image. It features a combination of Optronics adaptive mini-LED technology, full-array local dimming (FALD) based on mini-LED backlighting, and MSI’s quantum dot premium films.

The above specs certainly should contribute to a fantastic viewing experience. The monitor is likely to provide high contrasts, deep blacks, and high brightness. The superior imagery should come at no expense to gaming, as the MSI MEG Artymis also has a 165Hz refresh rate and a response time of 1 milliseconds. The screen also features a rather sharp 1000R arc curvature and an 800R center curvature.

MSI hasn’t revealed any further details about its new curved display, such as whether it will swivel, pivot, or have an adjustable stand.

MSI has another ace up its sleeve that’s also directed at gamers — although this one seems to be aimed at console gaming rather than PC. The MSI MEG 551U OLED is the company’s upcoming 55-inch OLED monitor for the gaming sector. Featuring a very large and wide screen, it promises high image quality for those who enjoy gaming on huge displays.

Both of these screens are directed at the premium sector. The curved model seems to combine everything most users wish to see in one of the best gaming monitors — fantastic image quality and high refresh rates. This combination makes it suited for both fast-paced shooters and immersive RPGs.

The pricing of these new monitors hasn’t been announced just yet, but it’s clear that they may not be cheap. MSI teased that both the screens will be available for sale sometime in 2022.