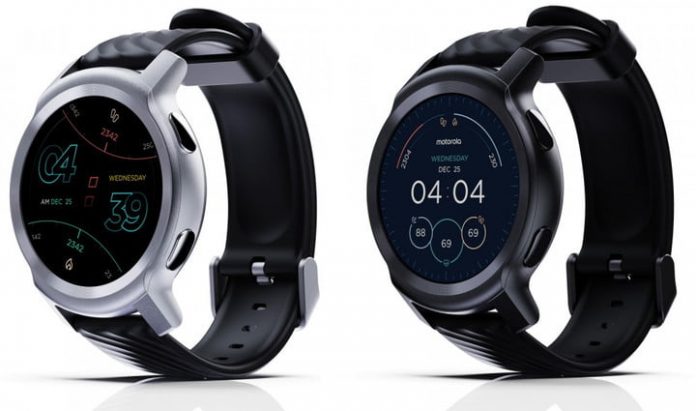 After being rumored for months, the Moto Watch 100 has finally been officially announced. This new watch might bring back flashes of the Moto 360 smartwatch that launched in 2019, but there are few similarities between the two apart from the fact that its creator is still the same manufacturer, eBuyNow, that also made the Moto 360.

One of the key changes with the Moto Watch 100 is that it has completely replaced Wear OS with a brand new Moto OS made from scratch. A lot about this new software is unknown, but one of the key advantages, according to the product page, is prolonged battery life. So, while Wear OS would only last two to three days, Moto OS extends battery life to two weeks. Most smartwatches also have a companion mobile app; however, the Moto Watch 100 doesn’t seem to have one as yet, the link to it currently leads to nowhere. As for features, it has 26 sports modes, smart notifications, an SPO2 tracker, and a heart rate monitor. Sleep tracking and weight tracking are included as well.

As for the hardware, the Moto Watch 100 comes in a circular 42mm dial made of aluminum that houses a 1.3-inch LCD and is built with “durability in mind.” The watch is also 5ATM water-resistant and weighs 45.8g. The 20mm straps come in black only and are replaceable, although the watch itself can be bought in either Glacier Silver or Phantom Black options. However, the product page seems to hint that the watch might get other more attractive color straps in the future.

In terms of sensors, the Moto Watch 100 has an accelerometer, gyroscope, HRM, GPS, GLONASS, BeiDou, as well as Bluetooth 5.0 LE. The battery size is 355mAh that the company says can be charged completely in 1 hour. The watch is available for pre-order, priced at $100.