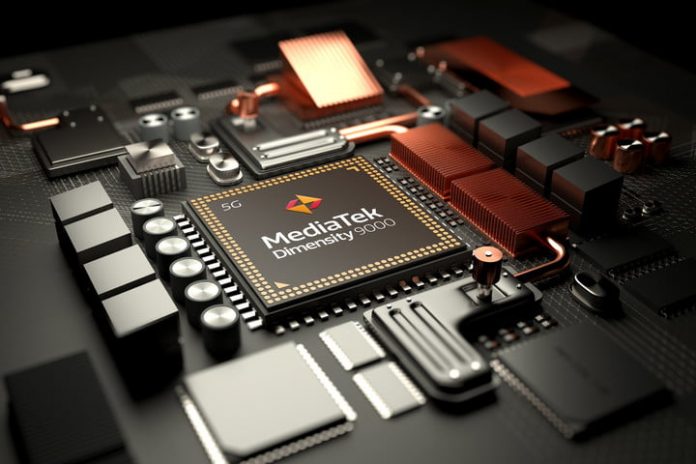 MediaTek recently marked its entry into the world of flagship system-on-chips (SoC) when it announced the MediaTek 9000 processor. The new mobile processor stakes the claim for being the first-ever 4nm chip to be based on ARM’S new Cortex X2 architecture. But did you know that the Dimensity 9000 has another first to its credit?

As it turns out, the MediaTek Dimensity 9000 system-on-a-chip SoC also happens to be the first-ever mobile processor to support LPDDR5X DRAM. Developed by American memory giant Micron Technology, the announcement about LPDDR5X DRAM on the Dimensity 9000 comes just one week after Samsung Electronics announced the development of its own LPDDR5X DRAM module, which back then was claimed to be the world’s first.

There is no doubt that this announcement is a big PR coup for MediaTek, which has managed to beat both Samsung (Exynos) and Qualcomm in announcing a product that uses LPDDR5X RAM. However, it remains to be seen whether MediaTek and its partner brands also become the first to launch a smartphone that gets to use LPDDR5X DRAM before the first Qualcomm 898 and Exynos 2200 devices arrive in 2022.

The MediaTek Dimensity 9000 processor has several firsts to its credit. MediaTek

LPDDR5X is a significant improvement over the existing LPDDR5 standard and promises a 33% improvement in data transfer speeds. It also promises noticeable gains in performance when it comes to AI, AR, and 5G apps — all of which demand large-scale data processing capabilities. This is, of course, apart from the enhancements expected in terms of user experience and speed.

It is likely that all flagship smartphones that will launch in 2022 — including the likes of the Samsung Galaxy S22 series and the OnePlus 10 series — will use LPDDR5X DRAM instead of the current LPDDR5 standard. However, most of these flagship devices are likely to use LPDDR5X supported chipsets from Qualcomm and Samsung, rather than MediaTek’s. The MediaTek 9000 chip is likely to be used on more affordable flagship devices, which are a rage in emerging markets like India and China that are dominated by brands like Xiaomi, Realme, and Vivo.

The arrival of the LPDDR5X standard on relatively affordable MediaTek chipsets will only accelerate the adoption of AI and 5G technologies in these markets. In fact, this could also help MediaTek further cement its position as the world’s top smartphone chipmaker — a title it usurped from Qualcomm last year and hopes to maintain and build upon.

Kuo: AirPods Max 2 Not Coming Until Second Half of 2024 at the Earliest