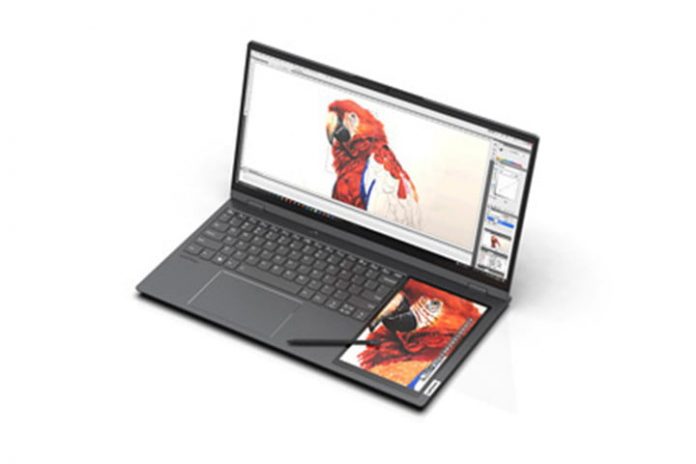 An interesting image was leaked on Twitter on Sunday, suggesting that Lenovo might be working on a brand-new laptop. The image shows a 17-inch Lenovo ThinkBook Plus with a smaller, secondary screen located on the right side of the keyboard. If the rumor is proven true, the laptop would certainly mark an innovative release for Lenovo.

The image was posted by @evleaks on Twitter alongside other gadget-related leaks. The poster is a reliable source with a proven track record, but it’s important to take this report with skepticism until Lenovo makes an announcement about the release of this laptop.

Evidence shows that this laptop may be intended to support creativity and drawing, perhaps replacing drawing tablets. The image shows a drawing in progress on the main screen, with the smaller, secondary screen presenting a zoomed-in version with some editing tools on the right side of it. There’s also a stylus, further suggesting that the new ThinkBook Plus might be a tool used by artists.

Aside from the relatively large secondary screen, Lenovo’s new ThinkBook Plus still retains its keyboard and large trackpad. The display seems to be extra wide, meaning that the keyboard still has a regular size.

This wouldn’t be Lenovo’s first attempt at releasing a dual-screen laptop. Announced at CES 2021 last January, the ThinkBook Plus Gen 2 comes with a secondary e-ink screen built into the lid. The touchscreen is black-and-white, it supports multitouch, and it can be used with a stylus. It’s a 12-inch screen with a 2560 x 1600 resolution.

If the new ThinkBook is released as is, with the secondary screen next to the keyboard, its purpose will likely be different from the e-ink version of the ThinkBook. A full-sized laptop that can double as a drawing tablet would certainly be a novelty that many artists might be willing to try. On the other hand, the size of the drawing space on this laptop may be insufficient for many, and it would force an awkward wrist position while drawing.

Aside from the rumored ThinkBook Plus, @evleaks also shared images of several other gadgets, including a laptop. A notebook was captioned “ROG TWS”, suggesting that it might be a new model of the Asus ROG line of laptops. This laptop also seems to feature a dual-screen setup of some sort, with a tilted secondary screen connecting the main display to the keyboard. It’s unclear whether this would be a touch display or simply an extension of the main screen.

It also looks as though Asus may be working on a Surface Pro competitor, as one of the leaked images showcases what appears to be a convertible laptop/tablet combo. It looks similar to the Asus ROG Flow X13, which can be connected to an external GPU for improved performance.

No further information about the ThinkBook Plus has been released. As the previous generation of this notebook was announced at CES 2021, it’s possible that Lenovo might drop the announcement for this model at CES 2022 in January.