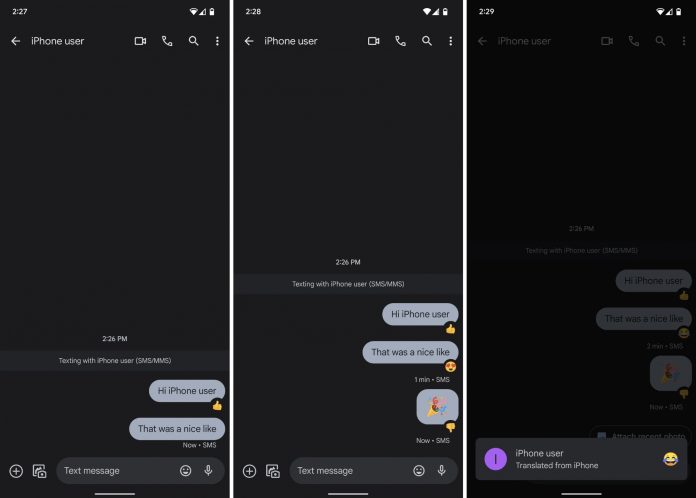 Last Friday, code suggested Google would soon roll out an update for Google Messages that would display iMessage Reactions from iPhone users as emoji on Android devices, and now that update has started rolling out.

Screenshots from 9to5Google reader Jvolkman
According to 9to5Google, some Android users are beginning to see iMessage reactions in Google Messages as emoji that are linked to the relevant conversation.

Prior to the Google Messages update, if an ‌iPhone‌ user added a reaction like a heart or thumbs up to a message in the Messages app, it would look odd on an Android device while showing up appropriately on an ‌iPhone‌. Adding a heart icon to a message showed a little heart on ‌iPhone‌, for example, but on Android, it would show up as [Person] “Loved” and then the text of the original message.

The text-based system could lead to awkwardness, especially with Android users unaware of iMessage reactions. It also cluttered up the chat thread by unnecessarily repeating texts.

As shown in the screenshots above, the reaction messages are linked to the chat bubble, and they also use icons pulled from the RCS system. As 9to5Google points out, the little heart for “loving” an image on ‌iPhone‌ is replaced with a heart eyes emoji on Android, and the laugh iMessage Reaction is translated into a laughing face emoji.

Android devices will also display a “translated from ‌iPhone‌” icon so that Google Messages users understand where the reaction is coming from.Tags: Google, Android, iMessage, Messages
This article, “iMessage Reactions Will No Longer Annoy Android Users Thanks to Emoji Change” first appeared on MacRumors.com

Perfect for parties, this projector and 100-inch screen bundle is just $49

Spotify makes a long-requested change to the ‘Play’ button, thanks to Adele