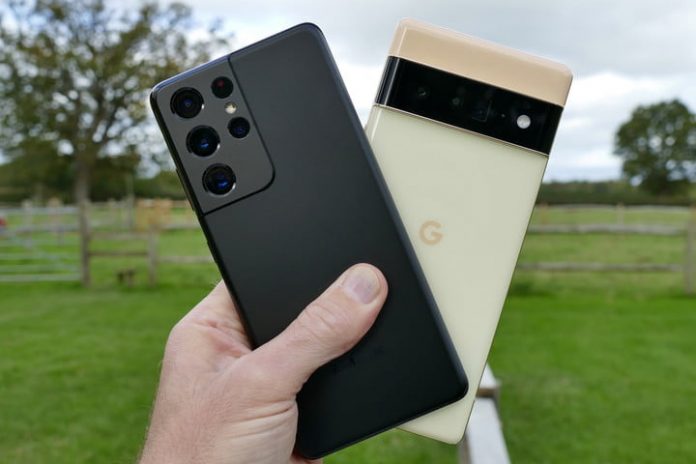 It seems Google is tired of having a reputation for producing only midrange phones with great cameras. At least, this is the impression created by the recently released Pixel 6 Pro, a flagship smartphone that takes everything great about previous Pixels and adds a range of premium features. These include the powerful Google Tensor processor, a generous 5,003mAh battery, a new triple-lens rear camera setup, and an impressively vibrant 6.71-inch AMOLED display.

Combined with the same great software experience, the Pixel 6 Pro is a decidedly competitive smartphone. Of course, it has competitors, with its main Android rival being the Samsung Galaxy S21 Ultra. This flagship phone improves on its predecessors in several key areas, offering an appealing new design, a jaw-dropping screen, and a very effective camera.

Few of us can afford to buy more than one current-generation phone at the same time, so the question is: Who wins when the Google Pixel 6 Pro and the Samsung Galaxy S21 Ultra go head-to-head? We provide an answer by comparing the specs of the two phones, as well as their designs, displays, performance, cameras, and software.

30W wired charging (no charger included in the box)

Compared to the aesthetically conservative iPhone 13 Pro, both the Samsung Galaxy S21 Ultra and Google Pixel 6 Pro are impressive with ambitious new design flavors. The Samsung Galaxy S21 Ultra boasts a nearly bezel-less and unbroken edge-to-edge display with a discreet punch-hole selfie camera at top center and a new rear camera module. This slopes smoothly into the phone’s top-left shoulder, making the phone look more well-balanced than it has any right to be with four camera lenses.

The Pixel 6 Pro is also attractively novel and sleek. Ditching the plastic backs of previous Pixels, the shiny glass back incorporates a horizontal camera bar. This not only looks different, but it also harmonizes nicely with the rest of the phone, its stylishness accentuated by the Pixel’s multitoned color scheme.

One design difference worth pointing out is that the S21 Ultra is noticeably heavier (by more than half an ounce) than the Pixel, while it’s also a touch taller. Given that both are large phones, this extra mass may make the Samsung a little more uncomfortable to hold for extended periods of time.

Moving to the display, the Galaxy S21 Ultra packs a sizeable 6.8-inch Dynamic AMOLED screen with a resolution of 3200 x 1440 pixels. This provides you with 515 pixels per inch, which married to a 120Hz refresh rate really does look the business. Luckily for Google fans, the Pixel 6 Pro more or less matches its sumptuousness, offering a 6.71-inch AMOLED display that also supports a 120Hz refresh rate. At the same time, its resolution of 3120 x 1440 pixels means it furnishes 512 pixels per inch, thereby matching the level of detail and vibrancy of the Samsung.

Both phones carry an official IP68 rating, meaning they can cope with submersion in up to 1.5 meters of water for as many as 30 minutes. Combined with the equally refreshing designs and captivating displays, this opening round is a tie.

The Galaxy S21 Ultra ships with the Qualcomm Snapdragon 888, which uses a 5nm manufacturing process for its transistor. This allows it to fit more transistors into the same space, which in turn means it runs faster than previous generation chips. This is also what you get with the Pixel 6 Pro, whose Google-made Tensor chip also uses 5nm transistors, making it noticeably faster than previous Google devices. On top of this, both phones contain a hefty 12GB of RAM, so either is more than capable of handling the latest games and running apps simultaneously.

Both phones are also nearly identical in terms of internal storage. They both start with models offering 128GB of memory and can be upgraded — for an extra cost — to 256GB and 512GB. Neither gives you a microSD card slot, so data management is probably a must if you get the basic models.

Turning to the battery, and again the Pixel 6 Pro seems to have been designed to match the S21 Ultra. Samsung’s device comes with a 5,000mAh cell, while the Pixel runs on a 5,0003mAh alternative. This isn’t meaningfully different in terms of size, although our review of the S21 Ultra found that it can last for two days without recharging if you’re a lighter use. By contrast, the Pixel 6 Pro can’t quite make it into the second day, at least judging by our hands-on testing of the phone.

However, we haven’t yet given the Pixel a full review, so we’re going to delay making a final judgment on this one. As such, this round is another tie, with both devices providing a very similar level of performance.

Pixels had long managed to be great camera smartphones without mouthwatering specs, so it’s an interesting treat to see that the Pixel 6 Pro really goes for broke this time around. It features a triple-lens rear setup, comprising a 50-megapixel wide lens, a 12MP ultrawide, and a 48MP telephoto lens with 4x optical zoom. The wide and telephoto lenses benefit from optical image stabilization, while the continued presence of Google’s highly capable software makes for some truly impressive photography. Indeed, shots look delightfully natural and vivid without being oversaturated or overdone, while the increased size of the main wide lens makes for some striking bokeh effects.

Looking only at the core functionality of each phone’s camera, you’d say they were more or less equal. However, we’re going to give this round to the Pixel 6 Pro, since its use of some special software features — such as the Magic Eraser and Action Pan mode — makes it more versatile and fun to use overall.

The Pixel 6 Pro uses Android 12, the latest and greatest version of the Google-made operating system. It brings a revamped design, a new notification shade, support for digital car keys, and a variety of highly entertaining (and usable) features for the camera. By contrast, the Galaxy S21 Ultra runs One UI 3.1, Samsung’s skin for Android 11. This offers a streamlined mod of the basic Android template, yet it also offers a laudably high level of customization, making it a strong all-rounder.

However, given that the S21 Ultra is still running on Android 11, while the Pixel already has Android 12, you may have guessed that Google’s phone will be better (i.e. more rapidly) supplied with updates. So while both devices are mooted to receive three core software updates, you will get things quicker with the Pixel. Meanwhile, the fact that it starts with Android 12 means that it will get Android 15, while the S21 Ultra may only reach as far as Android 14.

Both the Pixel 6 Pro and the Galaxy S21 Ultra support 5G. This includes the basic sub-6Hz frequency range as well as the faster mmWave band, while both devices are also supported by all major carriers on this front, so you should be able to get the fastest download speeds no matter who you go for.

As we’ve alluded to above, the Pixel 6 Pro introduces a suite of new software-based special features. Magic Eraser lets you remove objects from pictures Photoshop-style, Motion Mode allows for you to introduce movement into photos in various ways, while Wait Times and Direct My Call make it easier and less time-consuming to phone toll-free numbers and wade through automated menus.

The S21 Ultra also introduces a new special feature for the Galaxy S range: It supports the S Pen for the first time on a Galaxy S phone, meaning you can use it to draw, doodle, and take notes. That said, it doesn’t have a slot for the stylus (as you get with the Note 20 Ultra), while it lacks some of the more advanced compatibility features, such as the Bluetooth-enabled remote shutter control for the Camera app. Needless to say, you will also have to pay extra for an S Pen.

The Google Pixel 6 Pro starts from $899, with the 512GB version reaching $1,099. It can be ordered directly from Google, and it will also be widely available elsewhere and supported by all major networks.

They may be equal on a number of counts, but the Pixel 6 Pro does better than the Samsung Galaxy S21 Ultra overall. Google’s software wondery makes its camera more versatile and enjoyable to use, while it will be more readily supported when it comes to software updates. In addition, it matches the performance of the Samsung and offers a similarly alluring design and a stunning display.

That said, we haven’t given the Pixel a full review yet, and more in-depth tests may find that its battery doesn’t quite measure up to the S21 Ultra’s. If this turns out to be the case, we may end up changing the overall result in an update, since battery life is becoming increasingly important as we come to depend more on smartphones with each passing year.