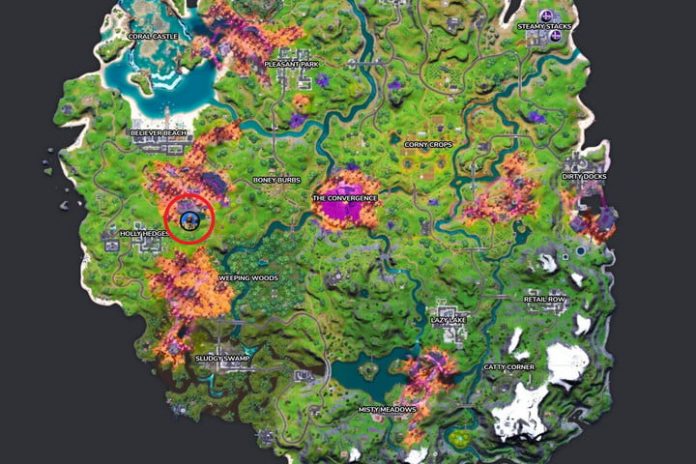 As part of Fortnite season 8, week 8, you’ll have access to another batch of quests, this time from an NPC named Sledgehammer. This NPC sends you to The Sideways to take on Cube Monsters, so you’ll want to know your way around these creatures to complete the newest questline.

As always during season 8, you’ll need to physically visit the NPC on the map to start the questline. In this case, Sledgehammer is just northeast of Holly Hedges, so pay them a visit to get started. Below are all five quests.

Open a chest in The Sideways (1)

First up, pay a visit to The Sideways to find chests around the area. By now, you should be familiar with The Sideways, but as a reminder, these are the large areas on the map indicated by a pink and purple circle. Likewise, you can visit Anomalies that are marked by shiny spots on the map. Either way, once inside, look around for the chests and open one to complete the challenge.

Eliminate different types of Cube Monsters in The Sideways (3)

Once you grab a weapon from one of the chests inside The Sideways, start working toward eliminating Cube Monsters. Once you’ve taken down three of them, you’ll earn credit. Just remember, they need to be three different types, such as the yellow ones or the larger purple versions. Just keep mowing them down and you’ll finish this one quickly.

In the process, you’ll likely earn credit for this challenge if you picked up a Sideways weapon right away. If you didn’t, make sure you search the nearby chests while in The Sideways to find one. We like the Sideways Scythe and the minigun.

As you eliminate Cube Monsters, they’ll drop Monster Parts. Go ahead and pick them up as you survive inside The Sideways.

Defeat a Boss Cube Monster in The Sideways (1)

The final quest seems to be glitched for a lot of players because it doesn’t unlock properly. You’d think you’d need to eliminate one of the large Cube Monsters you can see moving around on the map, but this doesn’t seem to actually work. Instead, go inside The Sideways or an Anomaly and defeat enemies, and eventually, it will give you credit. For some players, the quest will finish after taking out one of the characters that spawn inside an Anomaly, though this didn’t work for us. Ultimately, keep defeating enemies in The Sideways and Anomalies and it should work.