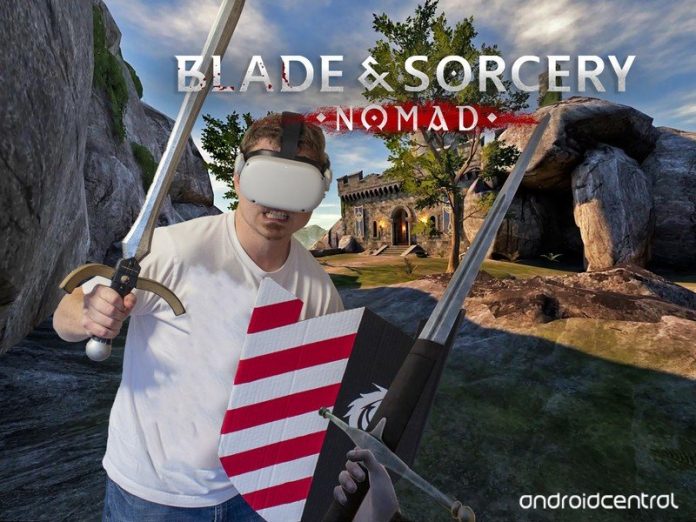 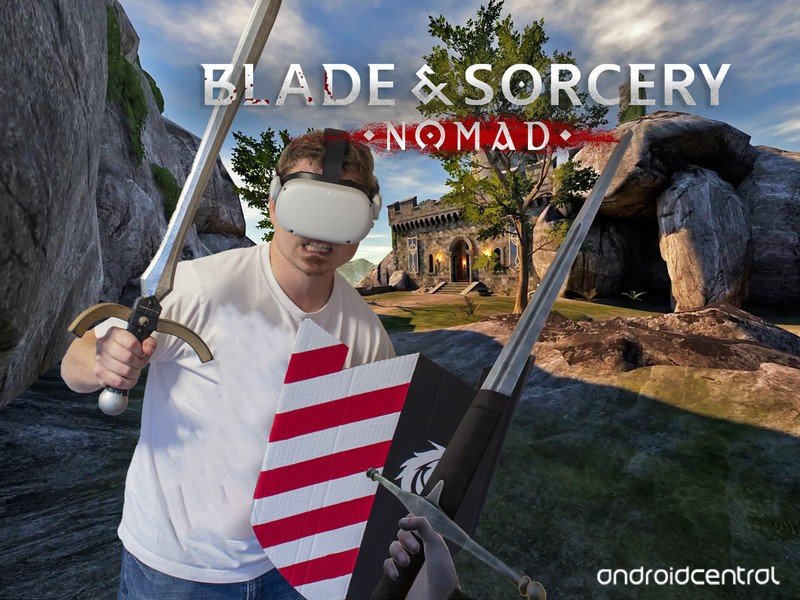 As a rule of thumb, Blade & Sorcery is one of those games that brings even the best PCs to their proverbial knees. So when WarpFrog announced it for Oculus Quest at Connect 2021, I could practically hear the sound of PC VR players’ jaws dropping around the world. What certainly seemed an impossible task was suddenly happening, and it is coming out in just a week on November 4 for the same $20 the PC version costs.

Not only did they somehow manage to make this incredible physics-laden VR medieval sandbox run on the Oculus Quest 2, but they also managed to bring over full mod support from the PC version — a staple of the game that helped bring it the popularity it has enjoyed for years on the PC — although this version will need its own mods made for it since the Quest 2 won’t be able to handle a one-for-one translation of those mods.

On top of that, the small team at WarpFrog delivered the latest updates to the PC game, including the newly-minted procedurally-generated progression mode with all the trappings of a proper roguelite-esque game. All of this certainly sounds too good to be true, but I’ve been putting the game to the test over the past six days, and I can assure players that this is the wire-free version they’ve always wanted.

Blade & Sorcery: Nomad is available exclusively for the Oculus Quest 2 for $20. 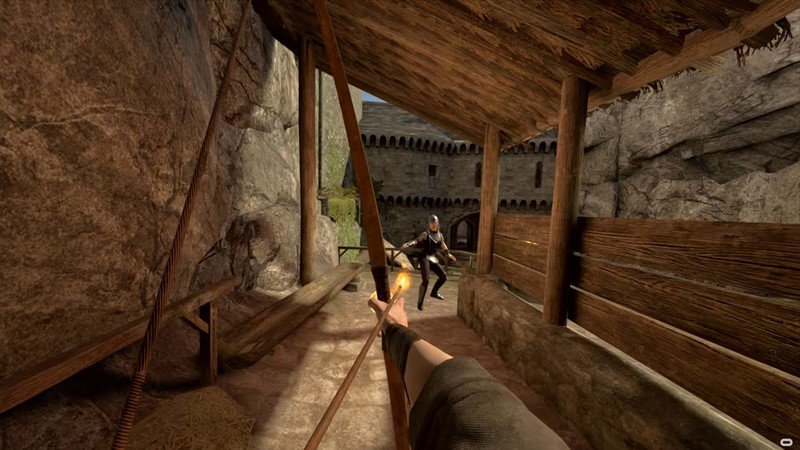 Just as in games like Until You Fal on the Oculus Quest, each weapon has its own virtual size and weight that affects how you can attack with it, how much damage you do, and how it’ll handle if you use it with one or two hands.

Unlike Until You Fall, however, most Blade & Sorcery: Nomad weapons don’t feel overly heavy or slow. It’s a balanced mix of “video gamey” and semi-realistic that feels just right. The Goldilocks of VR weapon handling, if you will.

As each weapon feels quite different, you’ll want to play around with all of them to find out which ones are your favorite — something that’s certainly possible thanks to the developer’s fully-sandbox design. Taking this extra time also prepares you for the “Dungeons” mode that you can also play at any time.

Upon starting the game each time, you’ll find yourself inside what can only be thought of as your home. It’s a quaint place with a lovely fireplace, comfy breakfast nook, and just about every medieval weapon you could think of tucked away into the corner of the room. Truly a place of relaxation.

Within your humble abode, you’ll be able to practice with any weapon you choose, cast any spell available to you, and decide where your next adventure will take you. Half a dozen different destinations await you at launch, and there’s more to come as the game’s developers announced that they’ll continue to update the game alongside the PC version — just not at the same time since both games are quite different on a technical level. 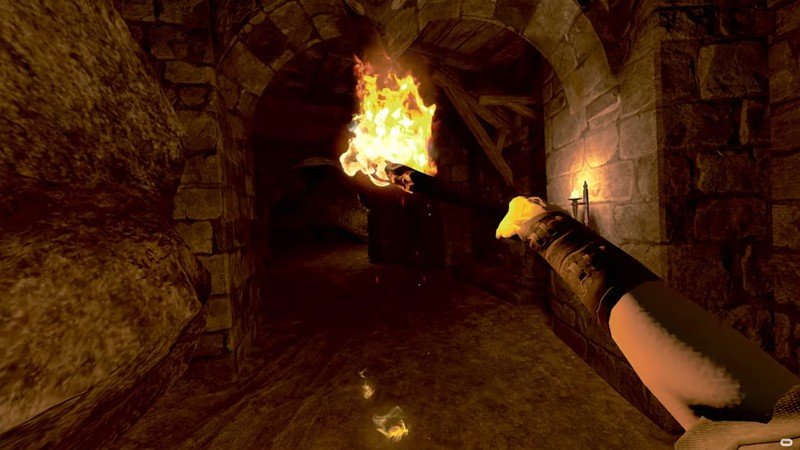 The game is a full sandbox from the get-go, featuring half a dozen locations and any medieval weapon you can imagine.

Most destinations are designed to be true sandbox arenas where you can select from dozens upon dozens of different enemy options who will spawn in waves to battle you over and over again. True to the sandbox fashion, you can choose to fight these enemies any way you’d like; by steel, by magic, or with the robust physics engine built into the game.

Casting spells can be an effective way to zap, burn, or pull your enemies into a black hole, and lifting objects with telekinesis and flinging them haphazardly at your unwitting enemies never really gets old. Pots, bowls, weapons, or even tables and benches are interactive and can be lifted, each with its own physical weight and proportions seemingly in line with real life.

Seeing this all play out on the Oculus Quest 2’s meager mobile CPU was nothing short of astounding. You won’t see nearly as many enemies at a time as you will on the PC version, and, of course, the visuals have seen a downgrade, but it’s nothing that won’t fool your brain into thinking you’re actually there most of the time.

The series trademark combat look and feel is all here, allowing you to dismember opponents, parry attacks, and hone your skills to great lengths to become whatever you wish. I was impressed by the general performance of the game, which was almost always solidly presented and ran smoothly. I came across a few hitches and a bit of bugginess with physics but nothing out of the ordinary for when the Quest 2 is taxed heavily.

Seeing this all play out on the Oculus Quest 2’s meager mobile CPU was nothing short of astounding.

Since it’s really an open-world sandbox adventure, your imagination is your limitation. It’s hilarious to play with friends and family in the same room and even more fun to take turns now that it’s wireless. Just be careful to draw your boundaries correctly, as the amount of locomotion in this game ensures you’ll be flinging yourself into a nearby TV if it’s too close.

That last part is easily the best part of all, as you won’t have to deal with a tether from a PC or the possibility that your Wi-Fi network (or PC) can’t handle the game. It’s all running on the Quest 2 exclusively — there’s no original Oculus Quest support because of technical limitations — so you won’t need anything more than a charged battery (be sure to pick up a battery pack to keep your Quest going for longer). 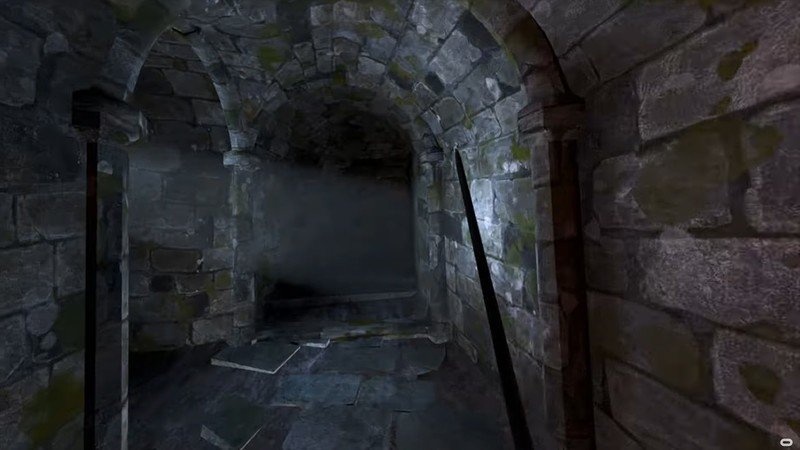 The newest mode in the game, Dungeons, is designed to be a procedurally-generated progression mode that’s not much of a sandbox at all. Sure, you can still choose your weapons before beginning battle but, once you start, you’ll only be able to use what’s found throughout your uniquely-generated adventure to progress. Eventually, of course.

Dungeons is the first non-sandbox mode introduced by the developers since the game debuted at the end of 2018 on the PC but, for now, the only mode available is still a sandbox one.

Once the mode is more complete — the developers estimate that to be part of the next update or two — players will have access to a proper progression mode which includes earning loot, coin, and experience which can be used at a shop and to level up, including adding new skills to your repertoire.

In addition to skills, WarpFrog says that it’s quadrupling the number of weapons available in the sandbox mode just for this new progression mode, including plenty of “surprises,” as the developer puts it.

But the “Dungeons” name is a bit of a misnomer; you won’t just be delving through dark, dank caverns in search of lost treasure. Instead, you’ll be visiting castles, outdoor areas, caves, and, yes, proper dungeons, too. Each of these areas is partially procedurally-generated, which means that you can expect heavy variations during each and every run through the mode, but not an entirely unique level generated by an algorithm.

The “Dungeons” name is a bit of a misnomer, really, as you won’t just be delving through dark, dank caverns in search of lost treasure.

That last part is usually good for quality control, as it allows some sort of developer control over the experience in the end. Dungeons won’t have a proper story, but it will certainly add a little bit of structure for players like me who prefer a bit of that sort of thing. 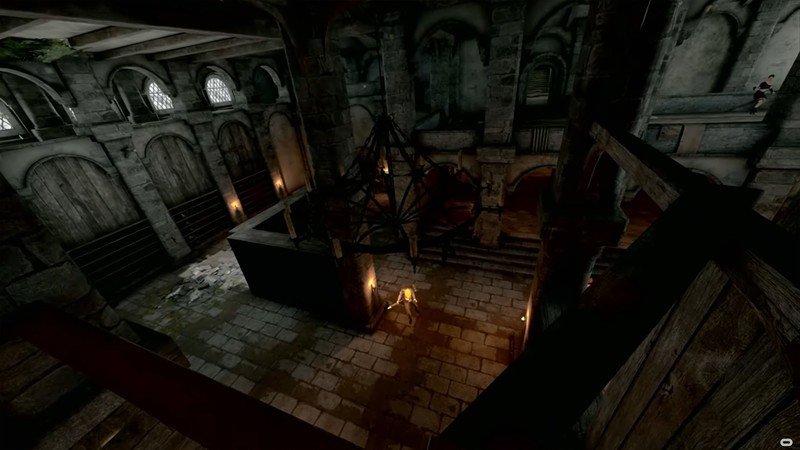 Technical achievements of getting a heavy game like Blade & Sorcery to run on a mobile CPU in VR aside, getting full mod support into the game feels like a dream come true for anyone who might have seen Blade & Sorcery streamed on YouTube or Twitch.

Blade & Sorcery: Nomad will have its own branch of mods available on the Nexus Mods community.

Yes, somehow, WarpFrog was able to create a sandbox physics game that also has full mod support on the Oculus Quest 2. Let that sink on for a moment. Mod support is not built into the game at launch, but the developers say it’s coming very soon on a “post-launch update.”

The caveat is that current PC mods are not compatible with the Quest 2 version of the game. While that’s a bummer for when support does kick in, it also means that mods will be made bespoke for the Quest 2 version of the game. Considering how resource-intensive some mods can be, that’s a great sign for your eyes and stomach, which may not appreciate the Quest 2’s little CPU croaking when it tries to load everything at once.

Given the breadth of mods available on the official Blade & Sorcery Nexus Mods page — including anything from Star Wars to God of War, Spiderman to Iron Man, and anything else you can think of — the Quest 2 port of Blade & Sorcery has a very, very bright future ahead of it.

Given the breadth of mods available for the PC version, the future is very bright for Oculus Quest 2 users.

If it turns out to be anything like the original, you’ll come for the medieval fun, stay for the laughs, and return again and again to see what incredible mod the community has cooked up next. 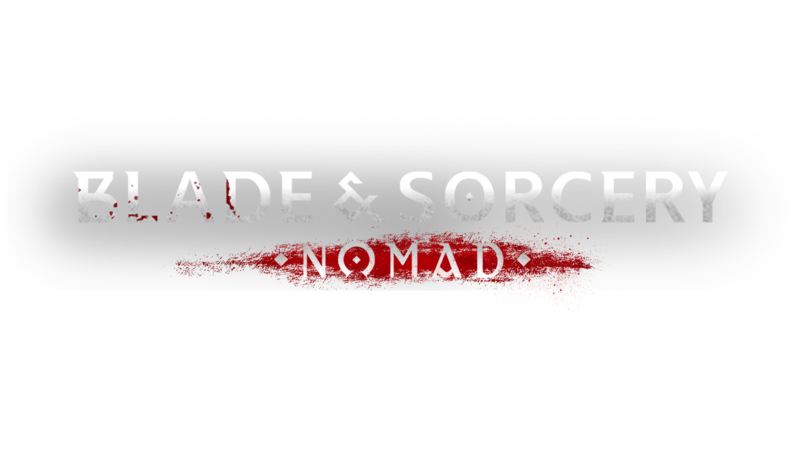 Medieval is just the beginning

Blade & Sorcery: Nomad is an epic port of an epic sandbox title, complete with the new Dungeons update and soon full mod support.