Barking mad? The DogPhone lets a canine call its owner 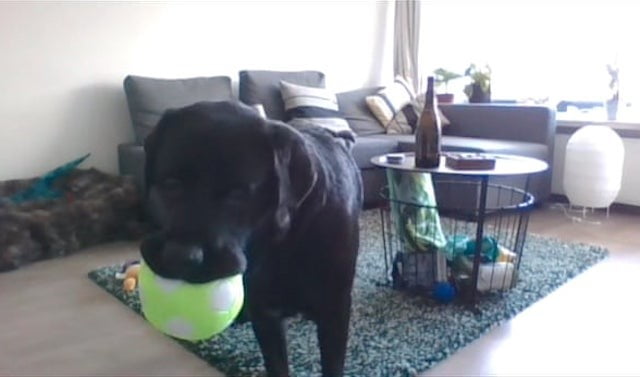 The idea of a dog using a special ball to video call its owner may sound barking mad, but researchers at the University of Glasgow in Scotland recently went ahead and built such a device.

The so-called “DogPhone” comprises a small ball fitted with a sensor. When the dog moves the ball, the sensor initiates a video call via a nearby laptop. The owner can also call the dog, but the pet has to move the ball to answer.

Research leader Dr Ilyena Hirskyj-Douglas said she was prompted to create the DogPhone after realizing there were plenty of devices that let owners check on their home-alone pets, but none that let the animals initiate interaction with their master.

“I’ve been building devices for my dog and many other dogs for quite a while now,” Hirskyj-Douglas said in a video discussing the DogPhone. “I think a lot of these devices are really important to give dogs choices or options to do things for enrichment reasons.”

Hirskyj-Douglas tested the DogPhone with her 10-year-old labrador, Zack. The test period lasted several weeks, with the ball left out for Zack every time she went out of the house.

Sure enough, Zack soon moved the ball across the floor, causing the laptop to video call Hirskyj-Douglas.

A screenshot from one of Zack’s video calls, with the pet shown holding the sensor-equipped DogPhone ball in his mouth. University of Glasgow

“It was very exciting to get calls from him initially,” the researcher said.

But she added that toward the end of the test period, she actually started to experience a sense of unease when Zack failed to make a call.

“It became a bit more anxious for me near the end because sometimes I wouldn’t get a video call or he wouldn’t ring me through the day, and I would be thinking, ‘Oh, he usually rings me at this time.’”

As for Zack, it’s not clear if he ever came to realize that moving the ball would cause his owner’s face to pop up on a laptop display, or if the calls were just placed at random whenever he played with the ball.

Hirskyj-Douglas appeared happy with the results of the experiment, saying that it demonstrated “we can really form technology very differently for animals. Animals can be active users of technology, they can control technology, we just really need to reshape our thinking about how we see the future of dog technology.”

An article on the team’s research, titled Forming the Dog Internet: Prototyping a Dog-to-Human Video Call Device, was published this month and presented at the ACM Interactive Surfaces and Spaces Conference in Łódź, Poland earlier this week.

There are no plans to commercialize the DogPhone, though we imagine there are plenty of owners out there who rather like the idea of their pet calling them up when they’re out, even if the conversation turns out to be a bit one way.