HomeNewsApple will now let you fix your own iPhone in win for...
News 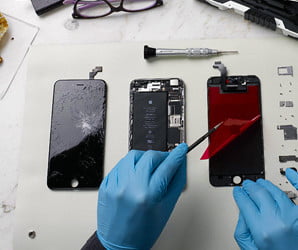 Apple will finally let iPhone users repair their own iPhones, the company announced today. It will start this effort with the iPhone 12 and iPhone 13 series, with an expansion to older iPhones and more of its product lines in the near future. Dubbed Self Service Repair, it is aimed at those customers who have the experience, skills, and willingness to get hands-on with product repairs. The company will send (or rather, sell) people parts, tools, and a manual in what is a huge win for right-to-repair campaigners.

The new Apple Self Service Repair Online Store will offer more than 200 individual parts and tools for sale.  Apple also noted that these customers who get access to the parts, tools, and manuals join a club of more than 5,000 Apple Authorized Service Providers and 2,800 Independent Repair Providers.

You won’t be able to repair your iPhone as a whole just yet, the company said. When the program launches in the U.S. early next year (with other countries to follow later in 2022), it’ll address the most common user needs like cracked display, waning battery capacity, and camera bugs. If your display breaks, you can fix it for yourself, and swapping out a battery to give your phone that extra bit of life will now be able to do be done at home.

“Creating greater access to Apple genuine parts gives our customers even more choice if a repair is needed,” said Jeff Williams, Apple’s chief operating officer, in a press release. “In the past three years, Apple has nearly doubled the number of service locations with access to Apple genuine parts, tools, and training, and now we’re providing an option for those who wish to complete their own repairs.”

Apple doesn’t say what happens if you botch a self-executed product repair, but it’s unlikely to be magnanimous in that case, and you may be stuck taking your phone to an Apple Store or to an authorized repair provider and have to pay for a fix. The company notably still advises that using a professional repair provider with certified technicians and genuine Apple parts is still the “safest and most reliable way” to get a repair.

As for what prompted this change, Apple likely isn’t doing this out of the goodness of its heart. The global push for the right to repair made this an inevitability. Apple was going to have to adapt or be forced into it by legislation. This way, the company can retain some form of leverage when laws start being drawn up.

E-waste is a huge problem worldwide, with discarded smartphones forming a large portion of that. Repairing, reusing, and recycling products is one way the environmental impact of our hyper-connected world can be reduced. Apple already lets you trade in phones (presumably to be refurbished or reused as parts), and now its move to reduce the barriers to repairing your own phone should go a long way in ensuring people keep their iPhones even longer.