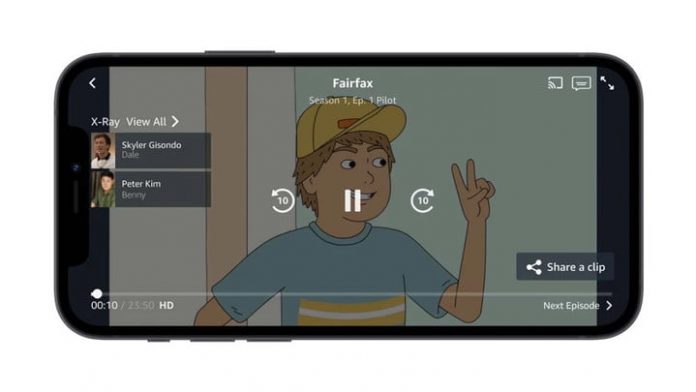 Starting today, Amazon Prime members with iOS devices will be able to share clips of some of their favorite shows on social media, directly from the Prime Video app.

Amazon announced the interactive clip-sharing feature this morning, saying that it’s coming to the iPhone, iPad, and iPod Touch and will use the standard sharing features built into iOS. This means you’ll be able to share your chosen clips to the same places as anything else shared from your device, whether that’s Instagram, Facebook, Twitter, or iMessage.

Sharing is limited to 30-second clips, and it’s only available for a limited number of Amazon Original shows at this point, but it’s still a pretty radical move among streaming providers who normally take steps to discourage this kind of sharing. In fact, most other services like Netflix and Hulu won’t even let you capture a still frame of a show, much less share a video clip. Taking a screenshot in most streaming apps will result in a black image that might show you some subtitles and playback controls, but not much else.

A “share a clip” button should begin appearing today in Amazon’s Prime Video iOS app to enable this feature. This will automatically generate a 30-second clip of what you just watched and open it in a simple edit screen where you can fine-tune and preview it before sharing.

For now, you can only share clips from The Wilds, Invincible, Fairfax, and season one of The Boys. Although Amazon promises it will come to more Amazon Original movies and series soon, it’s probably less likely to be available for non-Amazon content due to the usual copyright and licensing restrictions.

Amazon also hasn’t said when or if it will be coming to Android devices, but it seems likely it’s working on it.

This is the world’s fastest, highest-capacity PCIe SSD ever made