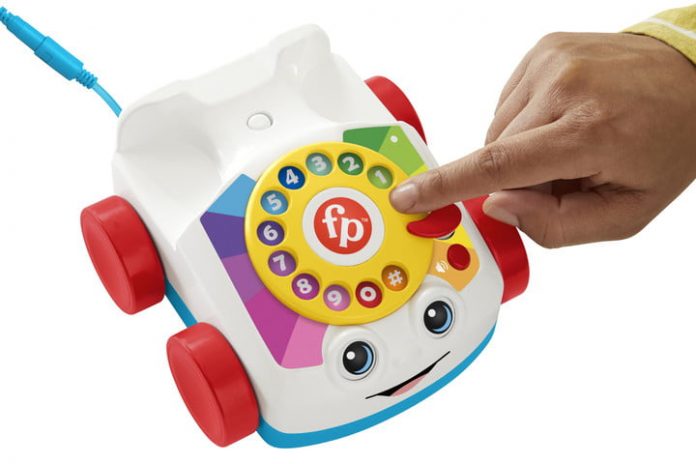 We’re going to be straight with you here: Not every phone accessory you see out there should have been made. There are a lot of them out there that give you shivers knowing that a boardroom full of people somewhere thought that they were a good idea. Maybe you’ve even given in to temptation and picked up an accessory that you weren’t always proud to use. We get it.

But sometimes, you come across an item that just clicks. There’s just something about it that tickles your nerd-fancy, and you just have to have it. Maybe it’s an item that seems ridiculous but can actually fill some kind of niche that only you are affected by. We understand, and we’re here to wave our nerd flags right along with you.

Here are five items that we’ve come across that are ridiculous, stupid, or both, but we just love them.

Any child can relate to the Chatter phone from Fisher Price. You probably dragged it around behind you or picked up the handset, along with the body, because of the three-inch cord it came with.  The eyes moved, and it made fun sounds and bells. It was the perfect phone for a three to five-year-old. But alas, we all grew up — or did we?

In honor of its 60th anniversary, Fisher-Price developed a real working Chatter phone that you can connect to your smartphone via Bluetooth and actually make calls with it. According to Fisher-Price, it features “bulky design, colors, eyes, and hands-on technology.” That’s quite the sales pitch. Our mobile section editor Ajay said, “If I ever get a corporate desk job, I’m going to take this phone in and take all my very serious business calls on it.”

Is this the most amazing accessory you can have? No. Is this a serious nostalgia play that you’ll probably regret? Almost certainly, yes. But we have to admit, it’s fun and compelling. Well played Fisher-Price.

For as long as there have been phones, people have been pretending bananas are phones. Well, pretend no more.  This banana phone is a Bluetooth-connected banana that you connect to your smartphone and use to make and take calls. If you’re wondering why, that’s a fair question, and you’ll be happy to know there is no good answer except, “Why not?”

Truth be told, you could probably walk around a public area holding an actual banana to your ear, pretend to have a phone conversation, and you’ll get the same reaction from bystanders. But why do that when you can have an actual Bluetooth banana? Plus, Banana Phone (the company, not the product) donates 2% of the proceeds to gorilla conservation projects. Just how great is that? It’s so unapologetically stupid, but it captured our hearts.

We’re fairly sure the photo tells the entire story here, but just in case, we’ll answer a few basic questions. Does it look like a Star Trek communicator? Yes. Does it work like one? Kinda sorta. Will it help you get a date for Saturday night? It depends on your surroundings, to be perfectly honest. If you’re on a convention floor, it probably won’t hurt your chances.

In all seriousness, this is a communicator that attaches to your clothing with a magnetic plate you wear under your shirt. It’s on the thick side, much thicker than the accessory you’ve seen on TV, but it’s not terrible. A double-tap activates your phone’s assistant, and you can tell it to call whoever you want. So, in that way, it’s a little like a Star Trek communicator, and who are we to argue? When you really stop and think about it, once Bluetooth technology was invented, this was the inevitable conclusion.

As an honorable mention, we’ll direct you to the TOS communicator that connects to your phone and charges wirelessly. Of course, why you’d want to use one handheld object in the place of another handheld object to make a call is not a question we can answer.

Foldables are making quite a splash this year, largely thanks to Samsung, so it makes sense that some accessories might start making their way to the public to support them. We admit we didn’t really see this coming, though. Samsung partnered with Dr. Denim to develop a pair of pants with pockets built specifically for the Galaxy Z Flip3. Not only that, but Samsung issued a two-page press release announcing them. It could have been worse; we could have gotten Unpacked 3 after all.

Did we mention that these are a limited run? That’s right, just 450 pairs of these pants will be made, complete with a “Z” in the design and a Flip3 friendly pocket. The scarcity compared to the popularity of the Galaxy Z Flip3 probably explains the exorbitant price tag these jeans command. They will set you back $1,499, which by the way, is a higher price tag than even the Bespoke Galaxy Flip3.

That price tag is why these jeans fall into the “dumb phone accessories” category. We love the fact that Samsung is supporting its foldable ecosystem in the fashion industry. It’s certainly better than just putting out some cheap cases and calling it a day. But setting a price tag that high is just a little dumb, and by “a little dumb,” we mean a lot dumb.

Some of you may look at this last accessory and just ask yourself “Why?” We understand that reaction but stay with us here. A glass-backed phone will be perfect for holding that suction cup, giving you just a little more to grip on the phone. It’s removable, so you don’t have to have it there all the time, and who among us hasn’t suffered from an overheating phone at one time or another?

Plus, this is multi-functional. You can remove the umbrella and stick the piggy onto the bottom of your phone, and just like that, you get a hands-free stand. It’s that kind of versatility that we really appreciate in a phone accessory. But let’s be real for a second — is this the best way you could possibly spend twenty dollars? Probably not, but the sub-$20 price point is well within impulse buy territory, and it has that certain ridiculous factor that can be a real conversation starter at parties. Plus, you know how you’re always complaining that your phone doesn’t have an IP rating? Ok, that one’s a bit of a stretch. Still, we can’t take our eyes off this one.

Why Should You Hire an SEO Company?