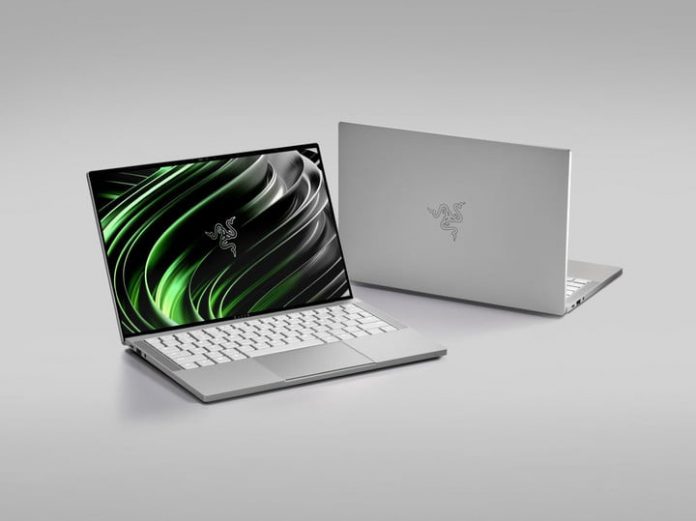 Windows 11 was released yesterday, and some brands have been quick to follow its release with some related news of their own. Razer announced the launch of two new laptops that both come with Windows 11 preinstalled — the new Razer Blade 15 and the productivity-oriented Razer Book 13.

The manufacturer is also offering free upgrades to Windows 11 for everyone who already owns a Razer laptop, though timing on when the update will roll out is speculative at best.

Razer is normally associated with gaming gear, and that’s what the Blade was made for, but the Razer Book 13 is aimed at a different audience. Similar to previous releases in the line, the Book 13 was made to be portable and efficient, with a stunning touch display and specifications meant to aid creative work. The only noticeable difference in this rereleased model is the addition of the Razer logo across the bottom bezel of the laptop.

The Razer Book is going to feature a 16:10 touch display surrounded by thin bezels and a resolution of up to 4K. The screen is reinforced with Corning Gorilla Glass, the chassis is made out of milled aluminum, and the entire notebook was made to be light and thin. Razer says the Book comes with an 11th-gen Intel Core processor and integrated Iris Xe graphics.

The manufacturer teased that the new Razer Book laptop will come in several different models, and the most expensive 4K variant will have the storage. It comes with Windows 11 preinstalled and is priced at $1,000 in its cheapest version.

The latest Razer Blade 15 Advanced is being released alongside the Book, with several different configurations up for grabs. While all of them feature a 15.6-inch display, the most expensive model comes with a 4K OLED touch display. The cheaper variants have high refresh rates (240Hz or 360Hz) and an IPS panel.

Across the different laptop models, Razer provides a solid mix of components. Customers are able to choose between Nvidia’s GeForce RTX 3060, RTX 3070, and RTX 3080 discrete graphics cards. Processor options vary, including the Intel Core i7-11800H and Intel Core i9-11900H featuring eight cores and a boost clock of up to 4.9GHz. The most expensive configurations come with 32GB of 3200MHz DDR4 RAM and the ability to upgrade up to 64GB. All of the laptops have an SSD with at least 1TB of storage.

The new Razer Blade 15 Advanced laptops are going to vary in price based on specifications. The cheapest one is priced at $2,300, but the price can go up to $3,399.

Aside from the new laptop releases, Razer promised free upgrades to Windows 11 to those who currently own a Razer laptop. According to the company website, Razer will soon release a full list of eligible models that will be able to receive a free upgrade. The upgrade rollout will start in late 2021 and continue into 2022, although no specifics have been given at this time.

Razer’s latest laptops are already available for sale on Amazon and through several other channels. Considering the current state of the market, it’s possible that these new releases will be snapped up quickly, despite the fact that Razer laptops can’t be considered budget by any stretch of the imagination.