You can now buy a prebuilt Razer gaming desktop, courtesy of Maingear 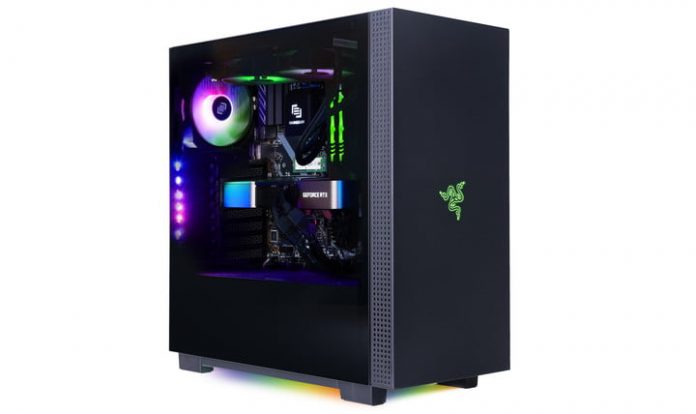 Razer just announced the release of the new Maingear R1 Razer Edition desktop computer. Designed for gaming, the PC is going to be available in four prebuilt configurations, as well as a customizable model that lets the user choose their own specs. Fully decked out with the latest components, these PCs contain many sought-after pieces of hardware such as the latest Nvidia RTX 30-Series graphics cards.

This line of computers is a collaboration between Razer and Maingear, a popular PC-building brand. Built to serve the needs of gamers, it has a set of specs that can easily handle most of the current games on ultra settings.

At first glance, the PC looks impressive and very on-brand for Razer. The manufacturer is known for its love of RGB — just look at its popular Razer Chroma line of products — and this is true for the Maingear R1 Razer Edition desktop. Many parts of the PC are awash in fully customizable RGB lighting.

The chassis itself is sleek and simple, with the familiar Razer logo placed front and center. The side is see-through, allowing a glance into the shiny world of the most powerful components on the market.

Inside the Razer Tomahawk chassis, users will find a varying set of specifications — all depending on the price range. The four pre-built configurations start with a $1,699 price tag that goes up to $3,499 for the most expensive variant.

There is also the option to build your own PC, starting at $1,860. In this configuration, the depth of one’s wallet is the only limit, with the best graphics cards, processors, and other components available to be picked.

On the other end of the spectrum, the high-end $3,499 build comes with an RTX 3080 Ti graphics card and an AMD Ryzen 9 5900X processor. This CPU has a whopping 12 cores and 24 threads. Combined with a liquid cooling system, 32GB of 3600MHz RAM, massive storage, and a powerful EVGA power supply, this one is a true gaming beast.

In between those setups are two additional configurations, one with an RTX 3070 and one with the base version of RTX 3080. The custom build lets the user pick both AMD Radeon and Nvidia GeForce graphics cards, including the RTX 3090 and the Radeon RX 6900 XT.

Interestingly, all of the desktops come with either Windows 10 Home or Pro editions. Although one might expect the latest OS in such high-end computers, the reason for that is quite simple — all of the PCs run AMD processors, which currently suffer from a huge drop in performance when running Windows 11.

In the midst of a graphics card shortage, getting a prebuilt desktop is often the faster and safer alternative, so it’s likely that this collaboration between Razer and Maingear will be snapped up quickly. The computers are already available for order on Maingear’s website.