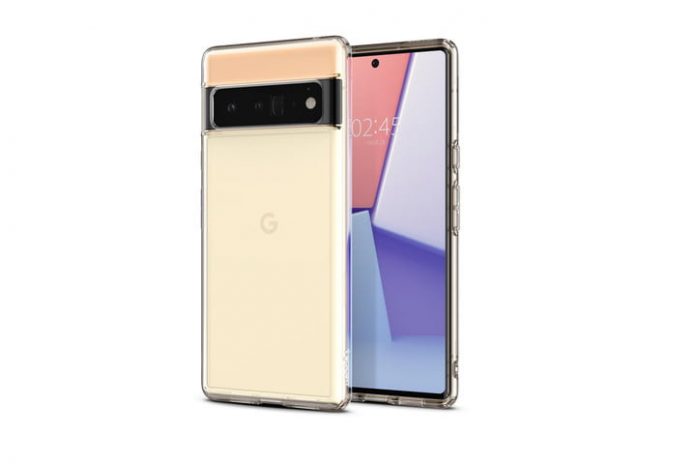 The Pixel 6 Pro has been revealed at a Google event, with Google revealing a flagship-tier phone that boasts premium specs. The phone boasts a Google-designed Tensor chip, which is aiming to compete with Apple’s Bionic range and Qualcomm’s latest Snapdragons. On top of this, the phone boasts a triple-lens rear camera and an appealing new design, with its rear camera bar helping it to stand out from the crowd. However, as enticing as it looks, you’ll want to protect it with a cover. Fortunately, we’ve put together a list of the best Pixel 6 Pro cases you can buy right now. This covers everything from slimline covers to more durable and deluxe items.

Also, because the Pixel 6 Pro has only just been unveiled, it’s worth checking back in the near future, since this article will be regularly updated.

Spigen has already come out with a fairly wide range of Pixel 6 Pro cases, but this particular model is our favorite. It comprises a single layer of hard PC mixed with more flexible TPU, which together provide a good balance of durability and flexibility. It’s made of sturdy stuff, and its use of Spigen’s Air Cushion Technology means its corners can absorb shocks with the best of them. However, its most endearing feature is its full transparency, allowing you to show off the Pixel 6 Pro’s radical redesign as if you have no case at all. It’s also very slim compared to other cases, so it remains convenient and comfortable to use at all times.

Ghostek knows how to create modern cases that pack (or rather, deflect) a punch, and its Covert Clear Case for the Pixel 6 Pro is no exception. It has been drop-tested to a military-grade standard, with tests showing that it can suck up falls from up to 8 feet. Helping it out in this respect is the use of Ghostek’s R2X shock-absorbing engineering, with the case’s corners and bumpers helping to dampen falls and other impacts. Other protective features of note include the scratch-proof back (made of hard PC), as well as the raised bumpers and edges, which protect the phone’s display and camera lenses. On top of this, the case is also appreciably slim and supports wireless charging, making it highly versatile.

Here’s a Pixel 6 Pro case from Caseology that focuses on ergonomics as well as protection. Specifically, it sports a 3D Hexa Cube Design intended to increase traction, with ridges on the side also enhancing grip. Aside from this, it has been certified as offering military-grade protection, so it will take a fair amount of punishment before you ever begin to suspect it might be suffering. It also adds raised bezels around the display and cameras, reducing the probability that either of these areas suffers targeted damage. Looking beyond its ruggedness, the case is also laudably well-designed, featuring a two-toned coloring that’s available in Ash Gray, Sage Green, and gold. It’s also pretty cheap.

We love wallet-style cases, and here’s the best one you can currently find for the Pixel 6 Pro. Manufactured by Olixar, it’s made from 100% genuine soft-grain leather. This feels great to the touch, and when combined with the underlying PC layer, it also provides a very good level of protection, something heightened by the fact that it also covers the front of the phone. As a wallet case, it comes with slots for cards and cash, allowing you to forget about your usual wallet. It also boasts a built-in viewing stand function, so you can watch movies or talk with friends with ease. You can also get it in and out of your pockets or handbag easily since the case doesn’t pack much unnecessary weight.

Here’s a quirky little Pixel 6 Pro case that offers a very convenient holster in addition to protection for your new phone. Basically, a holster clip allows you to attach it to your belt, keeping your phone within close and easy reach. Of course, this novel feature wouldn’t count for much if the cover also didn’t protect the Pixel 6 Pro reasonably well, so we’re pleased to report that it does indeed fulfill this function. It’s made of a hard polycarbonate that has been treated (with powder) to offer increased durability, so it will keep your phone protected from the vast majority of everyday accidents. Not only that, but its microfiber lining means that it will also keep the phone’s rear scratch-free. One other nice feature is that the case also comes with a kickstand, so when combined with the holster clip, it really is one of the most versatile Pixel 6 Pro cases out there. It also supports wireless charging.

Here’s a case that looks much more stylish and sophisticated than its price would suggest. Made of a durable synthetic fabric, it stands out from a scene filled almost entirely by plastic-only cases, with its textured canvas-based surface also providing a good level of grip. There is indeed an inner lining that provides extra reinforcement, so even though this cover is designed to be lightweight and slim, it’s hardy enough to defend your phone against most accidents. It also comes in a wide range of colors, from coral (as pictured above) to yellow, green, and many, many more.

If you’re bored of the run-of-the-mill generic plastic cases, this cover from LoveCases may be just the ticket. Made from gel-based plastic, it provides plenty of flexibility and convenience while also affording enough protection to guard the Pixel 6 Pro against most damage, including raised bezels that protect the screen and camera lenses. Most notably, the case features a colorful rainbow design that adds personality to your phone, while LoveCases also offer a range of other designs in the same line, so you can really choose according to your tastes. In addition to the design, the case is also one of the thinnest and most lightweight covers currently available for the Pixel 6 Pro, adding very little weight to the phone and allowing you to use it without fuss. Comes with all the right ports and cutouts in all the right places.

Here’s a Pixel 6 Pro case for anyone who wants to make sure that their phone won’t be damaged any time soon. Manufactured by Poetic, it has been drop-tested to a military grade and promises it’s shockproof, fall-proof, and scratch-proof. The use of raised lips also protects the phone’s camera lenses and screen, making it more difficult to harm the device. If that weren’t enough, Poetic has also thrown in a built-in front frame, which attaches to the case to provide all-over protection and to make your Pixel essentially damage-proof. Its pull-out kickstand also makes it easy to watch media hands-free in either a portrait and landscape orientation. Sure, it may not be the prettiest case out there, but you’d be hard-pressed to find a more protective one.

Facebook
Twitter
Pinterest
WhatsApp
Previous articlePoll: The MacBook Pro’s new price is too high for 97% of buyers
Next articleGoogle Pixel 6 vs. Pixel 6 Pro: What are the differences?
- Advertisment -