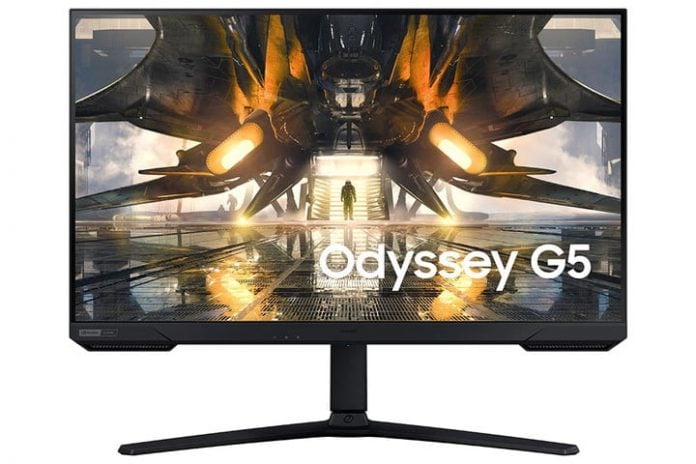 There’s some good news for gamers in need of a new monitor — Samsung has announced the release of the Samsung Odyssey G5 S32AG52, a new display tailored for an optimal gaming experience. The latest addition to the Samsung Odyssey line of gaming monitors, this screen offers a 165Hz refresh rate combined with a WQHD native resolution.

The new Odyssey G5 comes with a 32-inch IPS panel combined with HDR400, meaning it’s High Dynamic Range-compatible at 400 nits. This is a respectable level of brightness and should be suitable for most gaming or entertainment needs. The combination of an IPS panel, known for its bright colors and contrasts, and HDR400 is likely to offer good color reproduction.

Samsung promises a wide viewing angle on this 32-inch screen, stating that the image should remain clear from any viewpoint at a 178-degree angle. The display has a 21:9 WQHD resolution, which refers to a resolution of 2560 x 1440. Compared to Full HD monitors, Odyssey packs 1.7 times the pixel density, allowing for more content on the screen compared to other monitors.

The Samsung Odyssey G5 has a refresh rate of 165Hz combined with a 1ms response time. There are screens that offer higher refresh rates, but 165Hz should suffice for most gamers, even those who enjoy titles that rely heavily on refresh rates, such as first-person shooters.

It’s compatible with both Nvidia’s G-Sync and AMD’s Freesync Premium, meaning it can be used regardless of the graphics card installed in the system. The use of G-Sync or FreeSync Premium protects against screen tearing and minimizes input lag.

The monitor comes with an HDMI 2.0 port, a DisplayPort 1.2 connection, and a 3.5 mm headphone jack. It also has a DC 19V connection and a USB service port.

Visually, Samsung Odyssey G5 has thin bezels and a somewhat matte look. The monitor comes attached to a height-adjustable stand, and it can tilt, swivel, or even pivot if you prefer to work on a vertical monitor.

The G5 S32AG52 is the successor to Samsung’s rather successful line of monitors , which includes a variety of screens, such as the curvedSamsung Odyssey G5 LC32G55TQ. Although the monitor’s performance remains to be seen, on paper it looks like a good option for gamers and creatives alike, with a bright display and a good refresh rate.

Samsung has not yet announced when exactly Samsung Odyssey G5 S32AG52 will be up for sale, or for how much. However, the monitor is already live on Samsung’s website, so its launch can’t be far away.