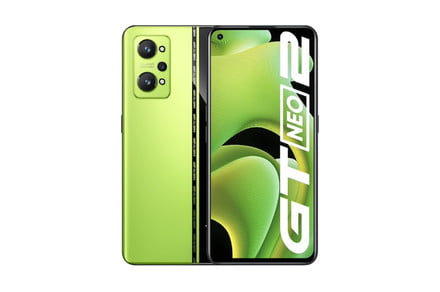 Realme is expanding its GT lineup with the launch of the Realme GT Neo 2. After introducing the Realme GT in Europe a couple of months ago, the company has unveiled the Realme GT Neo 2 in India. The smartphone is quite similar to its GT counterpart, coming in the signature neon green version, as well as blue and black color options. It will compete against the likes of the Poco F3 GT, Mi 11x 5G, and Samsung Galaxy M52 in the Indian market.

The Realme GT Neo 2 features a 6.62-inch full-HD+ Samsung E4 display that supports HDR10+, a 120Hz refresh rate, 600Hz touch sampling rate, 1,300 nits of peak brightness, and DC dimming. Under the hood lies the Snapdragon 870 SoC, which is a faster version of the Snapdragon 865 Plus from last year. According to Realme, the GT Neo 2’s vapor-cooling system is 30 percent larger and 20 percent more efficient, making use of stainless steel and copper.

Whatever you do, only buy the #realmeGTNEO2 in green. It’s an *amazing*, really eye-catching, 70s muscle car-inspired colour scheme, and I love it. The black chassis finishes it off perfectly. More on this one from me soon. #EverythingInNEO @realmeIndia @realmeUK pic.twitter.com/CbvKQfcZAF

The chipset is paired with up to 12GB of RAM, and the storage can serve as 7GB of virtual memory through the Dynamic RAM Expansion feature. On the camera front, the Realme GT Neo 2 sports a triple rear camera setup featuring a 64-megapixel primary lens, 8MP ultrawide-angle, and 2MP macro. You also get a 16MP selfie shooter. The smartphone packs a 5,000mAh battery that supports 65-watt SuperDart fast charging. It is touted to charge the device from zero to full in 36 minutes.

WhatsApp vs. Telegram: Which messaging app is better?