HomeNewsNikon launches the Z9, a pro-grade camera without a mechanical shutter
News

Nikon launches the Z9, a pro-grade camera without a mechanical shutter 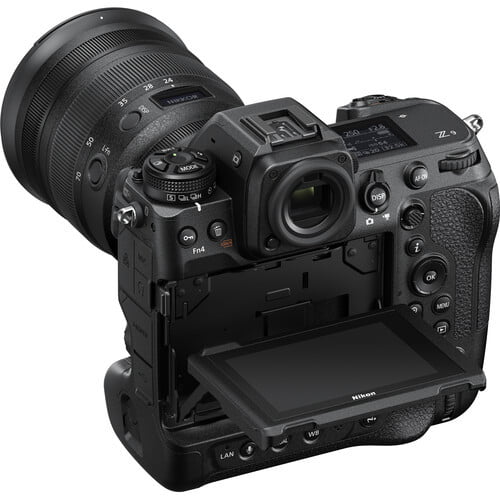 After months of teasing the Z9, Nikon pulled the curtain all the way back to reveal its flagship pro-grade mirrorless camera. The Z9 will go head to head with Sony and Canon’s current high-end mirrorless cameras, and it will certainly need to bring its A game to do so. Nikon also announced several hotly anticipated lenses to expand its impressive Z-mount lineup.

Nikon has packed some impressive specs into the Z9, which has a physical profile similar to that of its high-end DSLRs, with a built in vertical grip. It also features a unique touchscreen that eschews the fully articulating design most modern cameras have adopted in favor of a tilting design that is more flexible than that found in its Z6 II and Z7 II cameras, and is capable of tilting on more than one axis. The Z9 is also 20% smaller than the D6, though it retains the D6’s rugged magnesium alloy chassis, as well as extensive waterproofing.

The Z9 packs a 45.7-megapixel stacked CMOS sensor and Expeed 7 image-processing engine that enables it to shoot at high burst speeds of 20 full-sized RAW format images per second with a buffer of 1,000 images, or at 30 JPEG format images per second. It also features a native ISO range of 64-24,600, which is expandable to 32-102,400.

For those photographers concerned with how much space such huge files will consume, fret not; the Z9 has a new high-efficiency RAW file format that shrinks file sizes down to a third of more traditional uncompressed RAW images without any loss of image data. That’s a big deal if you’re planning to utilize the full-burst capability of this behemoth.

The big innovation here, though, is that the Z9 has no mechanical shutter, relying entirely on an electronic shutter. This removes a ton of moving parts from the system, which could potentially contribute to a far greater degree of durability. The sensor itself is made in-house by Nikon, which previously used Sony sensors in its cameras. The sensor is dual-coated with a fluorine coating and an electro-conductive coating to repel dust. There’s also an additional sensor shield for protection when changing lenses.

The camera is able to ditch the mechanical shutter thanks in part to that Expeed 7 processor, which boosts the scan rate, thus almost eliminating rolling shutter distortion entirely, even when shooting at its maximum shutter speed of 1/32,000th of a second. Flash sync is available at up to 1/8000th of a second with high-speed sync (HSS) enabled, or 1/250th of a second with it disabled.

AF tracking is also improved massively, with a subject detection algorithm capable of tracking a range of nine different subject types, including cars, trains, bicycles, motorbikes, pets, humans, birds, trains, and airplanes. Those subjects are automatically detected and tracked when shooting in auto-area mode. Nikon claims it can focus faster than any other Nikon camera, and it integrates improved eye tracking. Lowlight autofocus has been boosted so that the Z9 can focus at an incredible -8.5 EV.

Vibration reduction in the Z9 has also been improved with an image stabilization system that Nikon is calling Synchro VR, which it claims enables up to six stops of shake reduction depending on which lens you’re using. The new VR safety lock prevents damage from rough handling when the camera is turned off.

The Z9 makes great strides in terms of its video capability, as it is able to shoot at up to 8K at 30 frames per second (fps), and is able to do so for a whopping maximum recording time of 125 minutes in ProRes 233 HQ or H.265 formats. It can also capture 4K at 120 fps for epic high-resolution, slow-motion video. To sweeten the deal, Nikon is promising to introduce 8K 60 fps video capture in 12-bit ProRes Raw and 12-bit N-raw formats, alongside other professional filmmaking features in a free firmware update sometime in 2022.

As if all this wasn’t exciting enough for professional photographers and videographers, Nikon also announced several new pro-grade lenses for the system: The Nikkor Z 100-400mm f4.5-5.6 VR S and 24-120mm f/4. It’s also developing an insane 400mm f/2.8 lens with a built-in 1.4x teleconverter. There’s also a new FTZ adapter that offers a sleeker profile as opposed to the older model, which featured a large, bulky tripod mount that interfered with some accessories.

The Nikon Z9 will be available to purchase sometime before the end of 2021 for $5,499. That’s actually a real bargain, considering that this camera in some ways surpasses the capabilities of comparable Canon and Sony cameras that are significantly more expensive.