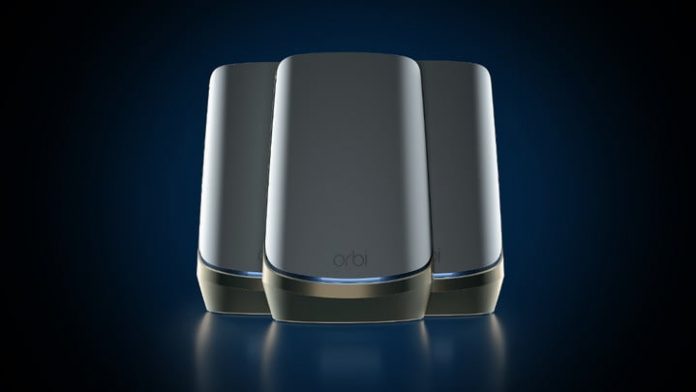 Netgear’s latest Orbi is a mesh Wi-Fi 6E network that claims to deliver some impressive-sounding speeds. This Wi-Fi 6E mesh router comes with a quad-band design and a new 6GHz band — you just need a home or office broadband plan that can deliver the speeds to take advantage of the Orbi’s features.

That promises speeds double what is achievable on the conventional 5GHz band found on most routers and whole-home mesh systems today. This means that the Orbi can reach a theoretical speed of 10.8Gbps.

The router will allow devices to connect on the 2.4GHz, 5GHz, and 6GHz bands, and there is a dedicated band to allow the routers and satellites to communicate with each other. Each band has 4 x 4 MIMO support. The biggest downside with this tech-loaded design is that compared to competing systems, Netgear’s Orbi is larger and more obtrusive. The router comes with 12 high-performance internal antennas and high-power amplifiers, Netgear said.

To truly take advantage of the quad-band Orbi, you’ll need a multi-gigabit internet package at home. For most homes, however, buying this mesh system is more about future-proofing rather than maxing out speeds. There are also a very limited number of devices that make use of Wi-Fi 6E connections — Samsung’s Galaxy S21 Ultra smartphone is one example.

The new 6GHz band is better for handling crowded and congested environments as well, so you’ll experience little to no performance drop if your home is packed with devices trying to access and connect at the same time. This latest quad-band Orbi is really designed for connected homes, though it doesn’t boast connected home protocols, like Thread, Z-Wave or Zigbee. Instead, it’s built for large numbers of Wi-Fi-connected home devices.

Like other mesh systems, the router’s controls and settings are accessible through Netgear’s Orbi app, which is available for iOS and Android devices. You can create four unique Wi-Fi networks, the company said. This way, you can keep things secure.

For a complete mesh experience, Netgear is selling various bundles consisting of the main router and satellite units that can blanket up to a 9,000-square-foot space. For maximum coverage, you’ll want the $1,499 pack that comes with a router and two satellites. Each satellite costs $599 if you need even more coverage.

Pre-orders start today, and the quad-band Orbi will ship in time for the holiday season. If you don’t want to spend that much money on a mesh network, be sure to check out some great alternatives from our selection of top-rated Wi-Fi 6 routers and mesh systems. In terms of Wi-Fi 6E support, the closest competitor to this Orbi is Linksys’ Atlas Max 6E, which comes in a three-pack for $1,199.

Facebook
Twitter
Pinterest
WhatsApp
Previous articleOnePlus 9RT: Everything you need to know
Next articleSamsung aims to double its Exynos shipments ahead of Galaxy S22 launch
- Advertisment -