HomeNewsHow Infrared Cameras Can See In The Dark
News

How Infrared Cameras Can See In The Dark 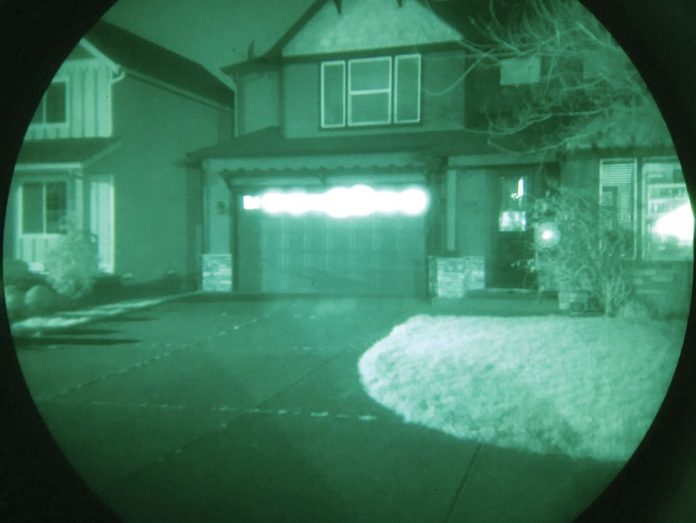 If you are planning to set up a security camera system, whether it’s at home or in your place of work, finding cameras that can capture clear images in the dark is vital. So before spending your hard-earned money on a set of new cameras, understand that not every camera has the ability to see in the dark. Although most modern CCTV cameras and even hidden cameras have night vision (also known as infrared), others have thermal vision.

Before investing your money, you should know the difference between the different cameras available on the market. It seems like almost every business has security cameras installed, and due to customer demand, there are lots of different products out there, which can make searching for the right system slightly overwhelming.

How do Infrared Cameras Work?

There are small LED lights that surround an infrared camera lens which begins to operate as soon as it gets dark. It will also have an IR sensor that produces night vision. These tiny LED lights are hard to spot, so intruders are often unaware that they are on camera. You won’t be able to spot infrared light with the naked eye. In comparison to regular light, it has a lower frequency and a longer wavelength. Infrared will be able to see the heat coming from a person or an object and display it on a screen.

When there is light available, an infrared camera will be able to produce a picture in color, but when it is dark, the infrared mode will kick in. When this mode is operating, you will only be able to see the images in black and white. However, most modern day images will produce a crystal clear image, even in complete darkness.

How Can You Detect Infrared Cameras?

Not everybody uses infrared cameras to protect their home or their business. Some people use these modern devices to spy on others. Although spying on people isn’t against the law if you were to install hidden cameras throughout your home, some folks put them in private areas in hotels, public buildings, and vacation rentals.

However, if you have just arrived in your hotel room, and you think somebody is spying on you, examine the room yourself. Check for any suspicious lighting, and take a close look at every object inside the room, including the bathroom. Keep in mind that most modern hidden cameras are tiny, and they are often installed in everyday items like alarm clocks, air conditioning units, and even doors.

Why It’s Important to Invest In Infrared CCTV Cameras?

Most intruders like to break into properties during the wee hours of the morning when it is completely dark. Before infrared CCTV cameras became popular amongst the average homeowner or business owner, thieves were able to get away with a lot of criminal activity. But most modern CCTV cameras have made these criminals rethink their actions.

Most thieves will scan their victim’s homes for security cameras before they enter the property. If they notice the house has a system in place, they might move on to their next victim. However, if they don’t spot the camera, they might proceed. If you have invested in a quality modern system, you should be able to capture lots of footage of them trespassing on your property. Without a security camera set up, you will find it extremely difficult to catch the culprit, and even if you or the authorities do finally catch them, proving it was them who broke into your home or business without any video evidence won’t be easy.

Are Infrared CCTV Cameras The Same As Day/Night Cameras?

A lot of folks assume that infrared CCTV cameras are the same as day/night cameras, which isn’t true. Day/night cameras do not use infrared technology, but they are fitted with an imaging chip which is highly sensitive. These chips allow the camera to capture clear images even in low light. Very few home owners invest in day/night cameras to protect their homes, but you will see them now and again attached to security lights or street lights. They require a constant source of light to function, so if the street or security light is not working, it won’t be able to capture a clear image when it is dark.

If you are looking for a security system, then you should consider investing in a set of cameras with infrared technology. They will operate no matter the environmental conditions.