HomeNewsHere’s how Pixel 6 and Galaxy S21 users can live the MagSafe...
News 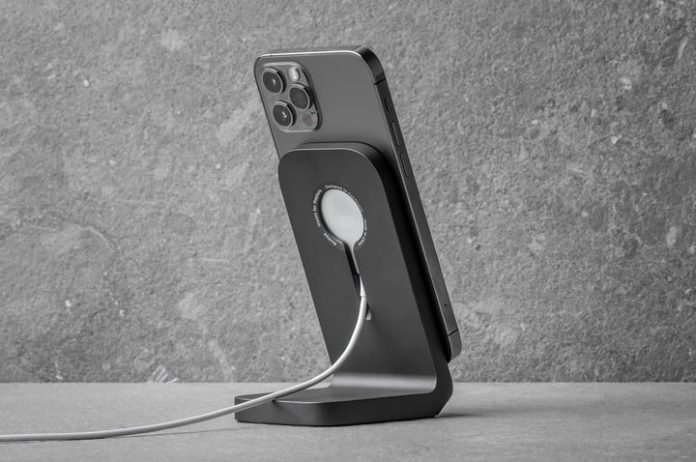 The other day, if you were scrolling through Twitter and avoiding Eternals spoilers and politics, you might have seen a tweet from David Imel from the MKBHD team. He was checking out the latest Pixel 6 and a Moment case, and he noticed that Moment seemed to have included MagSafe-compatible magnets with the case. Sure enough, he popped it on a MagSafe charger, and not only did the charger stick, it started charging the phone. You can watch the video below.

So Moment Pixel 6 cases work with MagSafe. You can charge your phone, use the wallet, other accessories.

This is hilarious but also amazing. pic.twitter.com/sYuzfXsQ3I

The case in question is the Pixel 6 case with (M)Force. That’s the branding that Moment uses for its MagSafe-compatible cases. (M)Force makes other phones able to use MagSafe-compatible accessories like Moment’s tripod mount and lenses. Moment also makes (M)Force cases for the Pixel 6 line, the Galaxy S21 line, and even goes back to the iPhone 11 series. This is frankly something every case maker should do.

The beautiful part about this concept is that MagSafe isn’t really proprietary technology.

The beautiful part about this concept is that MagSafe isn’t really proprietary technology. Spoiler alert: It’s a circle of magnets. Nothing too complicated there. One could argue that MagSafe is just the latest in a long and distinguished line of features that other manufacturers have borrowed from Palm. You may recall the original Palm phones had an optional charging stand called the touchstone that also used magnets to align the charging coils on the charger with the coils on the phone.

Fast forward to 2020, and Apple introduced MagSafe to the iPhone 12. At that time, Apple took the magnetic charger concept several steps further because that’s what Apple tends to do. Instead of just stopping at a charging puck, Apple eventually continued with a whole line of MagSafe accessories including chargers, wallets, and batteries. Other manufacturers followed suit, introducing MagSafe-compatible stands, dashboard mounts, and more.

There’s just something really nice about plopping your phone down on a charger and knowing that it’ll charge without any fiddling. One of the biggest dings against wireless charging is the fear that a phone isn’t set down correctly or gets knocked off a wireless charger accidentally. MagSafe solves that problem, and if you’re an Android user, you don’t have to look on with jealousy any longer because you can use MagSafe accessories as well.

In addition to Moment, several accessory makers have created MagSafe-compatible accessories and even adapter rings for adding “MagSafe” to your phone. Personally, I’ve been living that MagSafe life for months with my Samsung Galaxy S21 Ultra. My contacts at Mophie hooked me up with their new line of accessories called “Snap” that include magnet rings you can add to your phone, a vent-mounted phone holder/charger, and a portable battery.

The beautiful part is, you can add a Snap ring adapter whether your phone has wireless charging or not. Obviously, if the phone doesn’t have it, it won’t charge, but you still get the convenience of using the vent mount. You can also stick your battery pack to the phone to hold it and use a cable to charge it. I don’t want this to turn into a Mophie review; it’s just what I have. If you search Amazon for “MagSafe phone adapter,” there are a few brands to choose from.

What I like about Moment is that it’s building MagSafe compatibility into the cases themselves. By contrast, I found the Mophie rings can have a tough time sticking to glass-backed phones. For my S21 Ultra, I attached the Snap ring to the TPU case I was using, and it has stuck there ever since.

Expansion is good for everyone

I love that Android phones can have MagSafe as well. Phones that wirelessly charge will always have cases that can take advantage of the wide range of accessories that are available to iPhone users. I limit my usage to a vent mount, an occasional battery pack, and my Lenovo Smart Clock 2. But there are so many more other opportunities out there, including Moment accessories, phone stands, tripod mounts, and more. MagSafe is easy to use and gives you confidence that your phone will charge and not get knocked off by an errant hand in the middle of the night.

I genuinely wish more case makers would build MagSafe compatibility into their cases for phones with wireless charging.

Plus, it’s good for Apple. The more MagSafe compatibility is adopted on both sides of the aisle, the more accessories will become available for iPhones as well as Android phones. Apple gets more accessories, Android gets the convenience, and accessory makers get a new standard to play with. It could be amazing. I genuinely wish more case makers would build MagSafe compatibility into their cases for phones with wireless charging.

I hope Moment is not the exception, but rather the new rule. Not only would it bring convenient wireless charging to more phones and open up a whole new line of accessories for Android folks, but it would make the Palm lover in me sing.