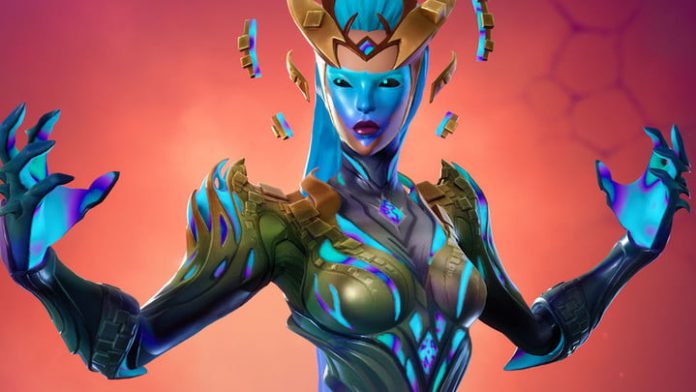 The newest set of Fortnite challenges is live, but this week brings something new. Aside from the standard punchcard quests this season, players will also have to complete a series of challenges in order to unlock various Cube Queen cosmetics, which are part of the battle pass. These are different from the NPC quests from before, as you don’t need to visit The Cube Queen to start the questline. Instead, buy the battle pass and complete the associated challenges to unlock the fancy new skins and items.

With this being tied to The Cube Queen, most of the quests involve visiting The Sideways, which can be tricky if you aren’t familiar with how it works. In this guide, we’ll show you everything you’ll need to know about completing these new challenges. Here are The Cube Queen challenges and how to complete them in Fortnite.

Kicking things off is a straightforward objective. Visit The Sideways — which is marked by the large orange and pink circle on the map — and collect one of the weapons from the chests or as drops. We advise collecting a Sideways Minigun, if possible, as you’ll need this for a later challenge. Once you’ve collected the weapon, simply survive for five circles total, which should take you to the very end of the match. As long as you play it safe and don’t engage with enemies until you absolutely have to, you’ll be all right.

Eliminate a player by using the Sideways Minigun

If you followed the steps from the first challenge, you should have a Sideways Minigun at this point. If not, enter The Sideways and look around for the Minigun. You can also collect one from an eliminated player, so you have a few options. The Minigun isn’t great, but if you damage a player with a better weapon first, you can swap to the Minigun to finish them off.

Boot up a team-based mode like Duos, Trios, or Squads, and play like you normally would. When you come across a downed player, shake them down by interacting with them, and you’ll get to see a scan of nearby enemies. Do this to two different opponents and you’ll complete the challenge.

There are a couple of ways to complete this one, but the easiest way is to visit one of the crash sites, which are scattered around the map. These are the areas with the pink slipstreams, where you’ll find little purple cubes that can be consumed. These are Shadow Stones and they essentially give you the ability to dash around quickly. Save this item until you come across an opponent and then hover around them to complete this challenge.

Deal 150 damage to players by using the Sideways Scythe

While visiting The Sideways, be on the lookout for a Sideways Scythe, which is a heavy melee weapon that can appear in chests. Dealing 150 damage isn’t too difficult, but it might take more than one opponent to get the full amount. It’s best to try this in team-based modes so your squadmates can distract the opponents while you get in close.

Complete a Bounty from a Bounty Board

Bounties have been in Fortnite for a long time, so you might be familiar with how they work. Above is a map of all the Bounty Boards on the island, so visit one and interact with it to start the mission. To complete a Bounty, you’ll need to eliminate a random player, so we advise attempting this in a team-based mode so you have plenty of backup.

Get two headshots with the Sideways Rifle

Once again, you’ll need to grab a Sideways Rifle from The Sideways, so head back in when you’re ready and loot some chests. When you come across one, leave the area and be on the lookout for a player. You don’t have to get two headshots on different opponents — the same player will do. It’s best to attempt getting a headshot on a downed opponent since they’re easier targets.

Glide in the smokestacks at Steamy Stacks

For the final challenge, head to one of the large smokestacks at Steamy Stacks and jump off the platform on the inside. Doing so will propel you into the air, giving you credit for completing the challenge. After you’ve finished all the challenges, you will have earned The Cube Queen’s Obliterator skin, along with the Islandbane, the Cubic Vortex back bling, Reality Render pickaxe, Queen’s Procession glider, and more.