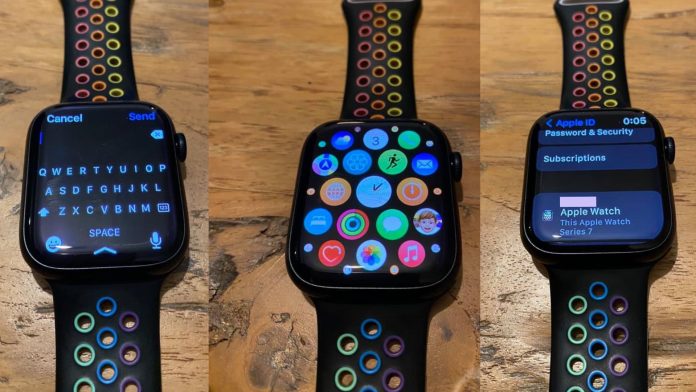 Amid rumors that the Apple Watch Series 7 could go on sale in just a matter of weeks, new images shared with MacRumors allegedly show the new Apple Watch in the wild, giving us our first real-world look at Apple’s latest watch.

The images were initially posted on a Facebook group for Apple Watch enthusiasts, but it has been taken down since its posting. The poster of the photos claimed that they are working for a carrier who was testing the Series 7 before it officially goes on sale “later this fall.”

We’ve so far only seen the Series 7 in Apple’s marketing and promotional materials, and the company has yet to announce a date for when it will be available for purchase. The images shared today offer us our first hands-on look at the Series 7 with its larger and more expansive display. Despite rumors, the Series 7 does not feature flat-edges but instead “more rounded and softer corners,” which allows the display to curve slightly over the sides.

The larger display is one of just a few design changes for the Series 7 compared to the previous generation. The Series 7 features an improved IP6X rating for dust and water resistance but internally maintains the same CPU as the Apple Watch Series 6.

While there certainly could be more internal changes for the Series 7, we’ll have to wait until we get our hands on the watch itself to learn about them. For a full rundown of everything we know, be sure to check out our comprehensive roundup. Related Roundup: Apple Watch Series 7Tag: Apple Watch Series 7Buyer’s Guide: Apple Watch (Don’t Buy)Related Forum: Apple Watch
This article, “First Real-World Look Shows Apple Watch Series 7 Amid Rumors of Imminent Launch” first appeared on MacRumors.com