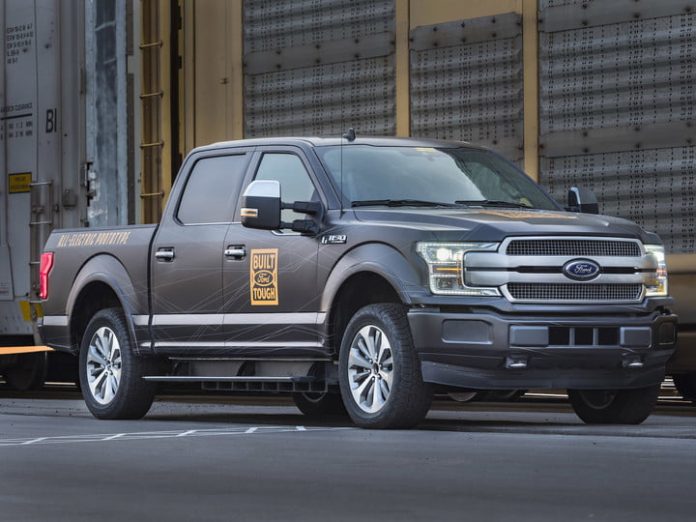 Ford’s new all-electric truck, the F-150 Lightning, will ship with 5G connectivity in 2022 courtesy of AT&T. The announcement came on Tuesday morning as part of the AT&T Business Summit, a virtual event to be held by AT&T on October 27 and 28.

The F-150 Lightning is currently under construction at Ford’s Rouge Electric Vehicle Center in Dearborn, Michigan, which is built on the 43-year-old Dearborn Rouge factory. AT&T’s 5G network is being implemented to help with the construction, design, safety protocols, and eventually the wireless updates required by the Lightning once it’s on the road.

This extends to the tablets used on the Ford production line, which provide updates on equipment status and supplies of materials; the phones that are used to scan the vehicle’s components; the automated safety systems that protect workers on the line; and eventually, the software patches that are beamed out to the truck.

An all-electric Ford F-150 prototype during a capability test. The battery-powered truck successfully towed more than 1.25 million pounds of rail cars and trucks during the test.

According to Ford, this is meant as a gradual step towards the deployment of what Adrian Price, executive director of Ford’s global manufacturing engineering, calls “significant additional advanced manufacturing technologies.” The 5G network access is primarily intended as a method to speed everything in the factory up, which in turn accelerates progress towards whatever’s coming next.

“With this collaboration, we’ll help Ford unlock the potential of 5G helping to build the truck of the future,” said Rasesh Patel, AT&T’s Chief Product and Platform Officer, in an official AT&T blog post. “It’s 5G connectivity coming to life! And it’s all thanks to the transformative ultra-fast speeds, incredibly low latency, and massive connectivity that is 5G in action.”

Announced in May, the F-150 Lightning is slated to become available in the spring of 2022. It features 563 horsepower, dual in-board motors, standard four-wheel drive with 775 lb.-ft. of torque, and an estimated 230-mile range with a standard battery. Its onboard smart technology includes BlueCruise hands-free highway driving, the recently announced Pro Power Onboard that allows the truck to be used as a portable electric generator, and an app that provides remote vehicle controls and “seamless” access to electric charging stations.

AT&T also announced on Tuesday morning that it intends to continue to expand its 5G coverage. In February, it paid a total of $27.4 billion — and that despite its significant leftover debt load from the Time-Warner merger — to secure 1,621 licenses in the 4Ghz to 8Ghz, or “C-Band,” spectrum.

AT&T is currently building out a network for C-Band, in an area between the more standard millimeter-wave range and sub-6Ghz. In advance of AT&T’s planned 5G launch in December, AT&T has entered into five-year agreements with phone makers Ericsson and Nokia to accelerate its network’s expansion.