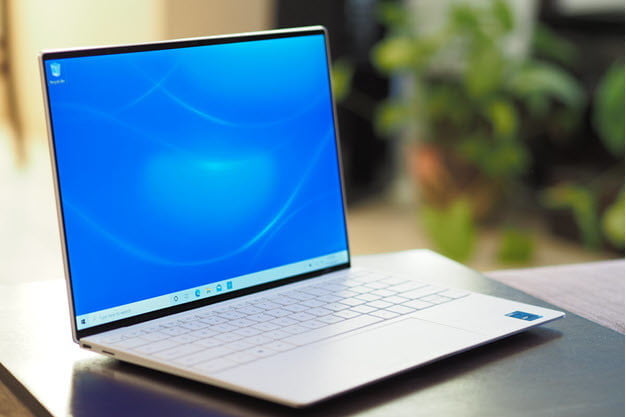 Dell’s XPS 13 is one of the best laptops you can buy for almost any task. There are several reasons it’s our choice for both the best laptop overall and the best 13-inch laptop, not the least of which are its diminutive size, its great looks and build quality, and its plethora of configuration choices.

That’s some stiff competition, but it didn’t stop Asus from producing its own 13-inch competitor, the ZenBook 13 OLED. Can this well-configured near-budget laptop compete against the best there is?

The XPS 13 is a study in simplistic elegance. It has clean lines, minimalist angles, and a silver aluminum lid and chassis bottom contrasted against either a black carbon fiber or a white glass fiber keyboard deck. The ZenBook 13 OLED takes a different approach with its Pine Gray color scheme extending throughout the laptop. The usual Asus concentric circle adorns the lid, and the angles are a bit more aggressive. Both are attractive laptops, but the XPS 13 is more refined and cohesive in its design.

Both laptops are also well-built, the XPS 13 constructed of the aluminum mentioned above and carbon or glass fiber, and the ZenBook 13 OLED made entirely of aluminum. You’ll find no bending, flexing, or twisting in either machine, and both enjoy hinges that allow the lid to be opened with one hand. The XPS 13 takes that a step further with a hinge that stiffens as you open it to a usable angle, keeping it more firmly in place. The ZenBook 13 OLED adds its own twist with its ErgoLift hinge that lifts at a slight angle that makes for more comfortable typing.

We liked the keyboard on both laptops, with both offering plenty of travel and precise, snappy switches. Touch typists will be up to speed in no time on either keyboard. We did find the ZenBook 13 OLED’s backlighting to be a bit uneven, a problem we didn’t experience with the XPS 13. Both layouts are mostly standard, although the Asus includes a row of page control buttons along the right-hand side, very much like you’ll find on HP’s Spectre keyboards.

The laptops also enjoyed good touchpads, with the XPS 13’s being a little larger thanks to the extra palm rest afforded by its taller display. Both support Microsoft Precision Touchpad drivers and so are reliable with Windows 10’s multitouch gestures. The most significant difference between the two is the ZenBook 13 OLED’s NumberPad 2.0, an LED number pad embedded in the touchpad. It’s a nice feature for anyone who enters a lot of text. The XPS 13, on the other hand, offers touch-enabled display options, where the ZenBook 13 OLED does not.

Finally, connectivity is mixed. While the ZenBook 13 OLED offers two USB-C 3.2 ports, a USB-A 3.2 port, an HDMI connection, and a microSD reader, which provides for better legacy support, the XPS 13 has two USB-C with Thunderbolt 4, a 3.5mm audio jack — something that Asus left off the ZenBook — and a microSD card reader. That makes the XPS 13 better able to support modern components like external GPU enclosures. Both laptops offer Wi-Fi 6 with Bluetooth 5.0 or better.

The ZenBook 13 OLED uses AMD’s Ryzen 5000 series CPUs in our review unit, the Ryzen 7 5800U. That’s a speedy eight-core processor at multithreaded CPU-intensive tasks. The Dell XPS 13 uses Intel 11th-gen Core processors starting with the Core i3-1115G4, and our review unit was equipped with the quad-core Core i7-1185G7. The ZenBook was considerably faster than the XPS 13 across all our CPU-based benchmarks. In Geekbench 5, for example, the ZenBook 13 OLED scored 1,423 in the single-core test and 6,758 in the multi-core test, compared to the XPS 13 at 1,549 and 5,431. As usual, the Intel chip did better when using just a single core.

Both laptops are more than fast enough for demanding productivity workflows. But the ZenBook 13 OLED can handle some more intensive creative workflows as well.

As with all OLED displays, the ZenBook’s offers outstanding brightness at 397 nits, wide colors at 100% of both AdobeRGB and sRGB, excellent color accuracy at a DeltaE of 0.49 (less than 1.0 is considered excellent), and a phenomenal 396,690:1 contrast ratio that makes for inky blacks. We tested the XPS 13’s UHD+ IPS display, and it wasn’t quite as great at 420 nits, 79% of Adobe RGB and 100% of sRGB, color accuracy of 1.21, and a 1,360:1 contrast ratio (very good for IPS). We’re sure that Dell’s OLED option would be as good as the ZenBook 13 OLED’s, except it would also be at a higher UHD+ resolution.

If you’re okay with Full HD, then you’ll love the ZenBook 13 OLED’s display. It’s old-school at 16:9, which is disappointing, but it would suit any demanding creative professional. The XPS 13 can match it and exceed it, but you’ll spend a lot more money doing so.

Both of these laptops are easy to pop into a backpack and carry around. The ZenBook 13 OLED is a bit lighter, and that’s a plus, but you probably won’t notice the difference unless you’re holding them side by side.

The ZenBook 13 OLED is a very long-lasting laptop away from a plug, and it wins this battle easily. The XPS 13 isn’t terrible, but equip it with its UHD+ OLED panel, and you’ll see even worse battery life.

The ZenBook 13 OLED is a fast and long-lasting laptop that puts up a good fight against the XPS 13. However, Dell’s laptop wins out for its greater configurability, better looks, and its precisely executed design.