Are smartwatches and fitness trackers making us more anxious? 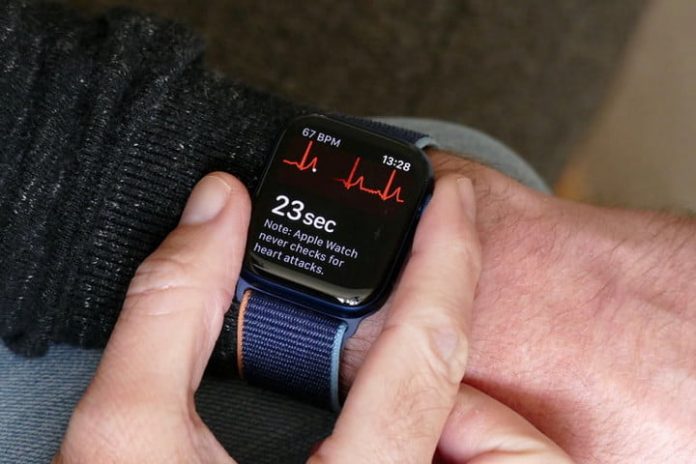 In a recent Apple Watch ad, one of the protagonists is shown taking an electrocardiogram (a test that can be used to check your heart’s rhythm and electrical activity) on his watch while riding a bus, working at the office, and even while hanging out at a kids’ pool party. The commercial’s message is clear: The latest Apple Watch is so powerful that you can run advanced medical tests anywhere in seconds. The question is: Do you need to?

Although smartwatches have made health insights more accessible than ever and motivated many to adopt fitter lifestyles, their rise has come at a cost. It has sparked a wave of anxiety among users who have become pathologically fixated and prone to over-diagnosing every alert from their wearables.

The rise of smartwatch-induced anxiety

Dr. Lindsey Rosman, a clinical health psychologist and an assistant professor of cardiology at the University of North Carolina at Chapel Hill, says her clinic has observed a growing number of patients with concerns about the information they receive from their smartwatches.

For example, in one particularly extreme case that Rosman wrote about in a recent research paper, a 70-year-old woman suffering from atrial fibrillation performed a staggering 916 ECGs on her watch in a single year, resulting in “12 ambulatory clinic and emergency department visits and numerous telephone calls to health care providers.”

The smartwatch data led to no alterations in the woman’s existing medical treatment, but she was ultimately diagnosed with health anxiety since her constant worry and frequent health care visits had a “profoundly negative impact on her mental health, relationships, and quality of life.”

Part of the reason why cases like this are increasingly common is that the avalanche of health data smartwatches dump on you is usually ambiguous and served up without any context. If your smartwatch tells you you may be suffering from a health condition and presents a few charts to go along with it, it’s easy for your mind to jump to conclusions.

The trouble with tracking everything

More importantly, while the latest wearables are capable of detecting certain health issues, they’re still no match for professional health care devices. Even a slight wrist movement, for instance, is enough to trigger an “inconclusive” test warning on an Apple Watch — which can easily be misinterpreted as a problematic reading.

In the case of patients who are already diagnosed with an unpredictable health disorder, the fear and uncertainty is even more acute. That tendency to engage in hypervigilant, obsessive self-monitoring via wearable devices comes as no surprise to Rosman.

Another study from the University of Copenhagen evaluated the wearable experience among over two-dozen chronic health patients and reached similar conclusions. While some participants reported that the constant nudges from their Fitbit tracker motivated them to engage in self care, the notifications were reported as a source of stress for many others.

The ‘datafication’ of the human body

Consumer fitness devices follow a one-size-fits-all model, and that’s not how the human body functions. It also partially explains why they sometimes end up doing more harm than good.

If, for someone, a goal-oriented atmosphere works best, it can induce a sense of failure in another. In the Copenhagen report, one of the patients emerged more distressed than before. The reason? Their tracker kept pushing them to accomplish an eight-hour sleep schedule even though they felt perfectly rested without it.

Should the patient stick to their existing routine or switch their habits to follow what the tracker suggests? The fitness device has no answer, and that highlights another shortcoming of wearables.

Smartwatches have powered the “datafication” of bodies with extensive monitoring and tracking, but they offer little actionable advice for what to do with all that information.

Dr. Emma Rich, a professor of physical activity and health pedagogy at the University of Bath in England, found that an obsession with raw data alone can especially lead to body dissatisfaction issues in young people. And the fact that the data is often at odds with how they feel can spark tension.

Reducing a person’s health down to arbitrary figures like step goals without a proper understanding of one’s personal health, she adds, can lead people to engage in forms of “self-monitoring that has been linked with disordered eating and/or exercising.”

Working toward a less anxious future

To prevent smartwatch-induced anxiety, experts believe there’s a need for greater collaboration between manufacturers and medical organizations. Patients and users, in general, need the education to understand the mountains of data their wearables are gathering, and to know when they should (and shouldn’t) contact a health care professional

Smartwatches have saved lives, but as they gain more professional medical abilities, their makers have to be more aware of how people might perceive and utilize them. If their latest ads are any indication, unfortunately, they’re far from realizing the grave consequences such features can cause.